An ergonomically designed workstation makes work positions more comfortable for employees – and it pays dividends by increasing productivity. Volkswagen has implemented a virtual human software program at its Wolfsburg plant

Ergonomics used to be a foreign-sounding word that meant little to companies, but nowadays, it could have a major impact on productivity levels. Imagine that the ergonomics of a workstation are ignored – the results could be disastrous. Consider this scenario: a particular bolt connection is hard to reach for a worker, and consequently it is difficult for the worker to tighten the bolt. The assembly line continues at a relentless speed, and the worker has a hard time keeping up, making his or her already uncomfortable position more painful in trying to continue working. The result of this could be that the entire production line screeches to a halt – an outcome no company can afford. In some situations, it might not even be possible to meet delivery times. 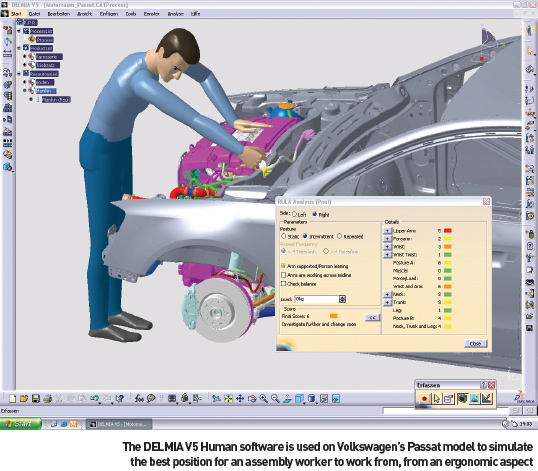 Ergonomics is the hot topic of the day
Wolfsburg-based Volkswagen has recognised the increased effects in productivity that an optimised workstation offers, and appointed an ergonomics engineer to improve the interface between human and machine at its plants. Since the beginning of 2007, Maileen Zander has been advising the carmaker on all issues relating to workstation ergonomics.

She says that there have been several enquiries from across all vehicle classes, which shows that ergonomics is a hot topic “with a lot of room for development.” Zander tells AMS, “On the one hand, we have an increasing number of employees who complain about physical problems, and on the other, various departments see the potential of manufacturing better quality products in a faster, more cost-effective manner using optimised work procedures.” This issue also applies to disabled employees. Their workstations need to be customised to suit their physical capabilities, or they need to be configured in such a way to also accommodate disabled employees.

As soon as Zander receives a department’s request to optimise a workstation, she analyses the existing work environment using pre-defined criteria. Given that an employee’s task procedures are often complex, she uses DELMIA V5 Human software, which enables her to create human CAD models called manikins.

“DELMIA V5 Human gives me the capability to first simulate work environments on the computer and to check their suitability before we implement them in real life,” she explains. The alternative would be to first change the work environment and then check whether the results actually reflect the desired improvements.

“DELMIA V5 Human is a complex, highly sophisticated system; however, the program is set up in a logical manner. I was able to master it fairly quickly and then turn it into a very productive tool,” she continues. Using the software, Zander is able to depict an entire workstation environment, as well as add and move human models. She can assign various parameters to the manikins and also modify different anthropometric variables, such as height and weight.

Possible postures are automatically displayed
Of the 65 movable body parts, 49 can be highlighted with individual colours. Certain body parts and areas like the spine, chest, lumbar region, or pelvis can be blocked or activated in the simulation. Objects can be added to the manikin, such as a hardhat that automatically moves with every motion. The field of vision also adjusts dynamically to the manikin’s movements.

“Since the system simulates many standard positions and you can also expand the body posture library, you are spared from having to manually model every new position,” says Zander. If actual conditions require a deviation from standard positions, they can be modified accordingly. The only limitation is what is anatomically impossible – DELMIA V5 Human cannot simulate motions on the manikins that cannot be done in real life. “For example, you can only rotate an arm backward to a certain point,” explains Zander. In addition to the manikin moving autonomously, it can also walk on reference surfaces. DELMIA V5 Human contains functions for climbing stairs and ladders, whereby the body automatically moves in sync with the limbs used. The human models can grasp objects within their reach as well. It is also possible to determine the projected effort required for a certain activity when a person is in a particular position. “DELMIA V5 Human can show me, for example, what the maximum weight of an object can be for a person to be able to carry it from A to B without injury,” she continues. 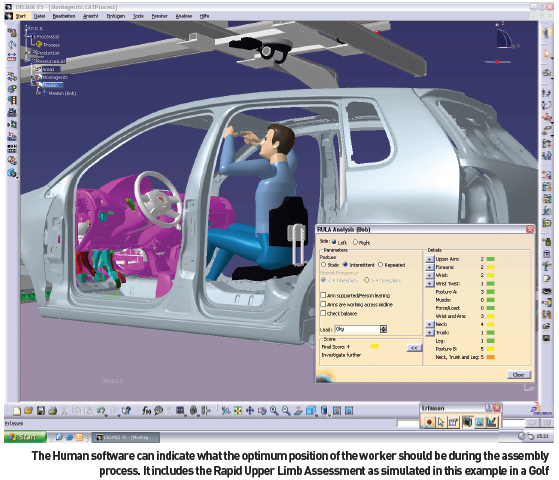 Not only can body postures and movements be depicted, but ergonomic factors can be analysed too. The system incorporates the RULA (Rapid Upper Limb Assessment) analysis method, developed by the University of Cambridge, which indicates what strain an assumed position can place on the body. The analysis uses a point rating process and red/ yellow/green traffic light visualisation. Other scientifically recognised analysis methods such as those developed by Snook and Ciriello, and the National Institute for Occupational Safety and Health are also integrated in the software. “DELMIA V5 Human is an absolutely essential tool for my work,” says Zander. “Without the true-to-life simulation, we would be unable to verify our findings in the early planning phase.”

She is convinced that Volkswagen will continue to give the topic of workstation ergonomics a high priority in the future. “Since I started here, we have received many requests from various divisions. It shows that our internal customers have recognised the software’s potential.” The results achieved are very positive and have made the leap from computer simulation to bona fide implementation.