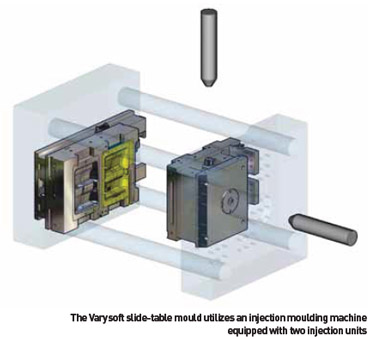 The Varysoft slide-table mould, developed by Georg Kaufmann Formenbau, produces soft-touch parts for car interiors. Now it is possible to vary the thickness of the softtouch foam via the mould geometry, placing it wherever it is needed in the part.

In the two-stage Varysoft process, the pre-cut decorative material is placed in the second cavity of the open mould and fi xed in place. The mould then closes and the decorative material is preformed. In the first cavity, the polypropylene supporting structure – for a door trim, for example – is moulded by a conventional injection moulding process and then cooled. When the mould opens, the PP supporting structure remains in the moving mould half and the preformed decorative material remains in the stationary mould half. Once repositioned, the gap is fi lled with expandable TPE foam via a special gating system.