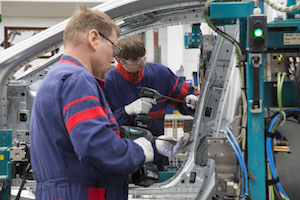 Finland – The contract manufacturer is adding 800 roles to 1,000 that were announced in November 2016, as a result of high demand and the finalisation of shift arrangements. The company's largest-ever recruitment campaign will boost the number of employees at Uusikaupunki Plant to almost 3,700 by late 2017.

The hiring process, due to last until April 23, will support production of the Mercedes-Benz GLC SUV. Valmet recruited 700 people in a previous campaign and the workforce currently stands at 2,300, with 300 more due to start in the next few weeks. The 1,060 workers now sought by Valmet will take roles in body, paint, assembly and internal logistics.

“Valmet Automotive is facing a unique challenge in Finland. In just three months, we need over 1,000 new car-builders in Uusikaupunki,” said Tomi Salo, HR director at the company. “Making this happen will have national importance, and we will do our utmost to succeed.”