User-defined torque – without a wrench 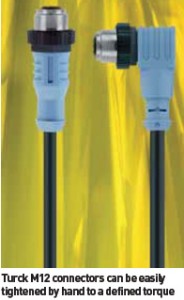 Turck has introduced the new M12Nm connector, billed as the first plug-in connector that can easily be assembled with a pre-defined torque without the aid of a torque wrench. Developed by the Turck group’s cable and connector specialist, Escha, the integrated torque control guarantees an IP67 connection.

The connector works on a similar principle to that of a gas cap. Once the user has joined the pin terminal and half-coupling with an axial movement, the lock bush can be easily tightened by hand.

Once the defined torque is reached, the lock bush disengages. A sound is made to confirm the connection, while further compression is prevented.

According to Turck, this is the fi rst device said to ensure a plug-in connector is connected with the correct torque of an O-ring’s required compression and can help avoid damage to the O-ring through overtightening. Male and female M12Nm connectors will be available as straight or angled 3-, 4- and 5-pin versions in mid- 2009. Turck has stated that the complete product range meets class IP67 protection requirements.