In April the Hannover Messe celebrated its 60th year, bringing the latest innovations in automation, energy technology and power transmission and control to the automotive sector

The Hannover Messe remains the world’s leading showcase for industrial technology. Over the last 60 years the focus has shifted from stand-alone components to end-to-end solutions. Technical innovation is a key element in the success of the fair and another is its sharp focus on the creative application of existing knowledge. Only at Hannover can the visitor experience complete value chains and swap information with experts from right across the spectrum of industrial sectors.

ODVA announced at Hannover that its subsidiary Schneider Electric, S.A., a worldwide leader in power and control, will significantly increase its level of support for the organisation by becoming one of its principal members, alongside Cisco Systems, Eaton Electrical, Omron Corporation, and Rockwell Automation. Schneider Electric’s increased participation in ODVA coincides with ODVA’s plans to extend the CIP Network specifications to provide compatibility of Modbus/TCP devices with networks built on the Common Industrial Protocol (CIP).

This extension will give existing Modbus/TCP users a clear path to CIP Network architectures while protecting their automation investment.

Schneider Electric’s increased support of ODVA reflects the company’s plans to deploy EtherNet/IP as a foundation of its network strategy. This action, by a global Fortune 500 company, is a major indication of industry’s continued push to adopt network technologies for automation that use standard, unmodified Ethernet and internet technologies. Users will benefit through significantly increased interoperability between the largest installed base of industrial Ethernet networks – EtherNet/IP and Modbus/ TCP – as well as between automation products from a growing number of vendors. Combined, these benefits will reduce the cost, time and risk for users in deploying and maintaining their network architectures.

Schneider Electric plans to have its next generation of EtherNet/IP products, incorporating connectivity to existing Modbus/TCP devices, in 2008. ODVA provided an overview of the concept planned for The EtherNet/IP Specification to support Modbus/TCP devices on EtherNet/ IP networks at its press conference on Monday, 16th April 2007 at the Hannover Fairgrounds.

The Hannover Fair offered the Siemens Automation and Drives (A&D) and Industrial Solutions and Services (I&S) the opportunity to demonstrate their pioneering role as the leading global provider of automation solutions.

EOS presented a completely new generation of lasers intering systems at stand E23 in Hall 17. With a build envelope of 200mm x 250 mm x 330 mm, the new FORMIGA P 100 manufactures plastic products within a few hours and directly from CAD data. The machine is ideally suited for the economic production of small series and individualized products with complex geometries, among others required by the automotive industry. Due to turn around times of less than 24 hours, the system integrates itself perfectly into a continuous production environment that requires highest flexibility.

The Euchner stand featured the STF switch which is derived from the proven STP safety switch with guard locking (power to release) and also offers a latch for the guard locking plunger. With the machine shutdown, the guard locking always remains in its current position. With power off, the safety door either remains locked or can be opened and closed as required. The guard locking cannot be activated. 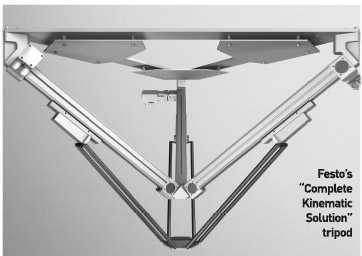 Festo demonstrated their “Complete Kinematic Solution” with their pick & place, linear gantries, 3D-gantries, pneumatic, electrical or servo-pneumatic gantries, all part of Festo’s multi-axis modular system which offers a complete range. The CMXR robot controller now supplements the modular system by adding a contour control function, which is capable of controlling kinematic systems like the tripod.

Kawasaki has just developed a new palletizing robot, the FD50N, which was on show at Hannover. The new palletizer has a payload capacity of 50kg, an ideal payload for palletizing and packaging small to medium-sized parts. The FD50N has been designed to be compact, yet provides a high throughput capacity. In particular, its work envelope is much longer and wider than that of its competitors, enabling it to be used in a wide range of applications.

Rockwell Automation’s display at the Hannover Fair included expansion of its Integrated Architecture production control/information system, with added capability in the Logix platform and FactoryTalk software suite for more real-time information exchange between the user’s production and business systems.

FactoryTalk has been expanded with Production Management and MES Software Based on Service-Oriented Architecture. FactoryTalk ProductionCentre delivers realtime information across discrete and process industries to assist with operational improvement, business risk management and quality assurance.

Numerous expansions have completed the Turck BL20 I/O system for Profibus, CANopen, DeviceNet, Ethernet/IP and Modbus TCP. Now available are the new extremely compact Economy modules that can house up to 16 I/Os on only 12.5mm width. No tools are necessary, thanks to the integrated connectors with “push-in” spring-balancing technology. The ECO modules are complemented by the new ECO Gateway for Profibus DP and CANopen, which also celebrates its premiere in Hanover.

The Moeller stand featured the new 5.7 inch MFD4 multi-function display, which is designed as a single unit: One unit not only provides the PLC, visualization and operation but also the easySoft-CoDeSys software. This combines the programming system and the visualization in one, and allows direct access to PLC variables.

MFD4 comes with an Ethernet, CANopen/easyNet and RS232 interface. The absolutely flat and seamless display surface is protected to IP65 and can be cleaned easily.

SICK-IVP (Integrated Vision Products) presented two new versions of what is still the world’s only 3D smart camera: the IVC-3D. While the IVC-3D 30 has been specially designed to view small and miniature parts, the IVC-3D 300 version focuses on large objects such as loaded pallets which is useful as a sensor for the visual guidance of robots.

Like all the other IVC-3D systems, the new versions also leave the factory already calibrated. These smart cameras are also ready for operation quickly as data output is provided in millimeters, which can be used directly by robotic controllers. 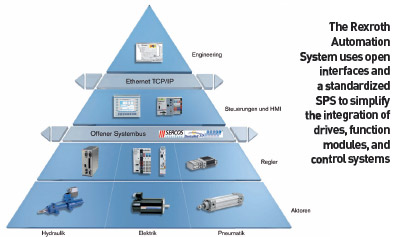 The Rexroth Automation System combines both technological and business advantages. The complete modular solutions simplify procurement processes, project planning, and commissioning of automation solutions and therefore make full use of all drive and control technologies. The flexible, user-configurable Rexroth Automation System uses open interfaces and a standardized SPS to simplify the integration of drives, function modules, and control systems in automation environments. 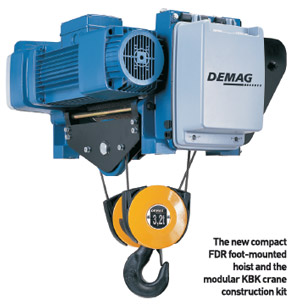 This year, Demag Cranes & Components GmbH focused on its products from the Industrial Drives Group. The DSR wheel block system, offering all the benefits of a complete rail-mounted travel unit that can be combined with a wide variety of drives, is just one highlight.

Dedrive Compact and Dedrive Pro are frequency inverters that are available in various sizes for a wide performance range. Other exhibits focused on the new compact FDR foot-mounted hoist and the modular KBK crane construction kit.

Habasit are exhibiting at the Hannover Fair with Rossi Motoriduttori. Rossi Motoriduttori introduced Standardfit the new Coaxial gear motor series which ensures one of the most competitive price/ performance ratios and interchangeability within current market standards.

Standardfit has the same overall dimensions (size), and it guarantees the best performance in terms of torque and service factor with very low-noise products compared to its main competitors. With Standardfit, no modifications are required to existing machines, because its overall and coupling dimensions are the same as the most widespread standard on the world market, offering the possibility to replace the gear reducer easily and without additional costs.

UGS introduced its NX 5 software, the latest version of its 3D CAD/CAM/CAE system and Version 8 of its Tecnomatix digital manufacturing software. Attendees at the Hannover Fair were able to see how CAD, CAM and CAE have become more flexible and powerful than ever before, and how Digital Manufacturing helps companies to better plan their production facilities. UGS also demonstrated Teamcenter solutions for Content and Portfolio Management and its Tecnomatix applications integrated within Teamcenter, Velocity Series with Solid Edge Version 19, Teamcenter Express, Femap and NX CAM Express, specially designed for SMEs.

The JENOPTIK-VOTAN C BIM Laser cutting Robot is designed and constructed to remove waste edges from door panelling or shoulders, to remove excess film from back-injection moulded parts or to create cut-outs in medium-sized plastic parts - cleanly and leaving no visible or structural damage. 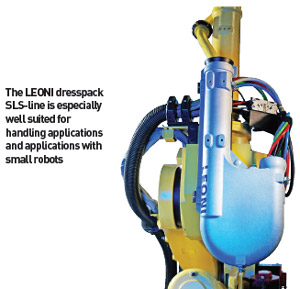 LEONI Business Unit Robotic Solutions presented the LEONI dresspack SLS-line at the Hannover Fair. This system for perfectly guided, adjustable-length dresspacks is the smaller and compact version of the successful LEONI dresspack LSH-line. It is especially well suited for handling applications and applications with small robots. A specially designed casing guides the dresspack from axes 3-6 at variable lengths. A spring retraction system, inside the casing, adjusts the length of the dresspack.