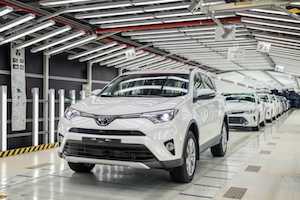 Canada - The Japanese OEM has said it will spend C$1.4 billion (US$1.08 billion) to upgrade its three assembly plants in Woodstock and Cambridge, Ontario, in order to prepare for the production of new models that are based on the Toyota New Global Architecture (TNGA). These include the all-new 2019 RAV4 and RAV4 hybrid. Furthermore, the company will invest C$200m in research and development in Canada over the next ten years.

On completion of the plant investment project in late 2019, Toyota has said that Canada will be the "North American hub" for production of the RAV4 and the company's hybrid vehicles. "Toyota Motor Manufacturing Canada has always had a strong partnership with the Canadian government," added Fred Volf, president of Toyota Motor Manufacturing Canada (TMMC). "With 30 years of manufacturing experience, our success is a result of TMMC team members, who are known for their dedication, high levels of skill, and challenge mindset. We're aggressively adopting new technology and innovative processes to ensure our ongoing success."

TMMC's plants in Woodstock and Cambridge are currently able to produce over 500,000 vehicles per year. The investment is expected to support over 8,000 jobs in the region, and will create 450 new jobs as well as 1,000 new co-op placements. Justin Trudeau, Canada's Prime Minister, praised the move by Toyota, and announced that the government would put aside C$110m to help the OEM with the project.

The news marks the largest of several recent investments in Canada's automotive industry. In March 2017, Ford said it would spend C$500m to establish a research and engineering centre in Ottawa shortly after it had invested C$700m in its manufacturing facilities across the country. In January 2017, Honda promised to spend C$492m to modernise its Ontario manufacturing facilities.