Automation is key to sealing the deal in a global industry that relies on getting results before the competition. AMS reports on ABB’s complete turnkey package for Jaguar’s Castle Bromwich plant, and looks at how Motoman helped one US metals company stay ahead of the game

Ever since operators have been turning out premium vehicles they’ve been sealing the joints by hand – first manually extruding sealant over the seams and then brushing it into the joints. Water doesn’t stand a chance.

Recently, engineers in Jaguar’s Castle Bromwich paint shop opted to automate the process, selecting ABB to project-manage the construction of a new automated cell that both seals and soundproofs the S-series, XK and XJ cars rolling down the line.

“It’s a dual cell: one cell does the body sealing and the other does a sprayable sound deadener application,” says Chris Globe, Manager of Paint Engineering at Jaguar’s Castle Bromwich works. “It’s actually two separate functions.” 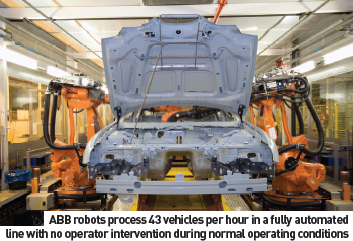 The sprayable sound deadener was something totally new for Jaguar. Traditionally, the automaker had been using bitumen melt pads that were pre-cut to shape and manually placed in the vehicles in the paint shop.

“We’ve replaced this process with a sprayable liquid epoxy material that is extruded in flat panels using a number of robots,” says Globe. “It has allowed us to automate the application process, and we don’t have the complexity of the 30 to 40 different shapes of melt pads, which had to be individually installed previously. We’ve reduced that complexity down to one spray-on material. It also allows us to make any additional sound deadener that product development finds they need as they’re producing a new model. We can do that quickly and easily because we just program it into the robot.”

On the other half of the new cell ABB robots are busy applying joint-sealing material to waterproof the joints along passing car bodies.

“That used to be done manually by men with an extrusion gun. It was a two-stage process where they would manually extrude over the joint they needed to seal, then they would brush that material into the joint. It was very labour intensive. We’ve basically replaced those two operations with the robot application,” says Globe. “The robot probably works around four to five times as fast as the manual operation, largely because it just has to pass over once, applying a ribbon of sealer to the joint.”

Jaguar engineers decided to combine the two processes for a couple of reasons: the previous manual operations were done at roughly the same point in the line, and both operations involve very similar application technologies. 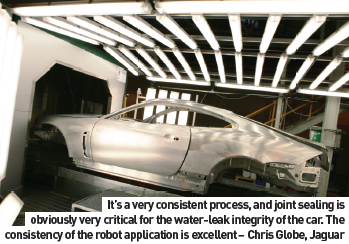 In terms of application similarities, in both cases, the materials are pumped from bulk storage tanks as thick liquids to various take-up points at lineside, and then fed down into the robots through a control system that controls the amount that is dosed per shot. The sound deadener material has to be heated, so there’s a slight difference there; but generally the pumping, the handling and the dispensing of the two materials are similar in both operations.

Firm with a full package

In picking a firm to build and integrate the new cell, Jaguar was looking for some previous experience in handling both types of the new materials. “We were also looking for a turnkey capability – we needed someone who could project manage the conveyors, the booth enclosure construction, the robots, the material handling systems and the dosing systems. It had to be one outfit that could project-manage the whole job.

“ABB wasn’t the only firm that had that experience, but they did have the advantage of producing the robots that were going into the cell. When you look at a large automated facility like that, the actual value of the robots compared to the total facility is actually quite small – it doesn’t necessarily have to be a robot supplier that does the work because you can just go and buy the robots.”

Installation began in February 2005 and the facility, which has a throughput of 43 vehicles per hour, has been in full operation since June 2005. It is fully automated with no operator intervention during normal operating conditions and has a high percentage of ‘no-touch’, meaning minimal post operation remedial sealing activities are required.

Globe says the cell has been working very well since it began production two years ago. “The process consistency is very good,” he says. “However, our experience is that the joint sealer operation is considerably easier than the sound deadener application. Because of the nature of the sound deadening material it appears to be quite aggressive on the equipment. It’s quite abrasive, and it’s made worse by the fact that it needs to be applied hot; put those two things together and it makes the equipment wear out quicker.

“However, the accuracy of the robots is very good and we’ve had some development to do with the application guns themselves. But generally the uptime of the unit has been excellent.”

Most of the efficiencies gained to date through use of the new cell have been in labour costs as robots have replaced a number of operators. However, Globe stresses that the operations were automated for reasons of quality – and for that it’s been very effective. “It’s a very consistent process, and joint sealing is obviously very critical for the water-leak integrity of the car. The consistency of the robot application is excellent. We have very good water-leak performance on all the cars.” 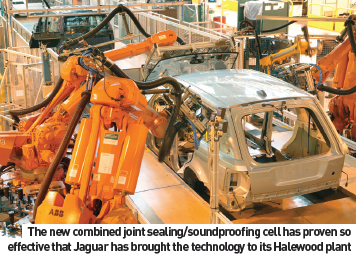 And major reason for automating the cells was ergonomics. The second half of the joint sealing operation involves working on the underside of the vehicle, which in a manual operation meant a number of operators working underneath and constantly looking up. “It was safe, but not very good ergonomically – they were looking up all the time, it was bad for the neck. Obviously robots don’t care about ergonomics.

The new combined joint sealing/soundproofing cell has proven so effective that Jaguar has brought the technology to its Halewood plant, which produces the X-type and Landrover Freelander. “This time we used Eisenmann, a German paint shop supplier, to put the cell together and they provided something very similar to the ABB cell here at Castle Bromwich. There was no particular reason why we chose Eisenmann over ABB other than Eisenmann had already done much of the conversion work at Halewood paint shop.

Globe says Jaguar may roll out the technology at other plants in the future, subject to investment. “We had the best justifications at these two plants, but we may do it at other plants.”

Motoman racks up productivity at Tru-Form

For Tru-Form Steel and Wire, an Indiana metal fabrication company that produces returnable metal racks for the automotive industry, it was either automate or bleed business to China.

“Our industry is labour-intensive. Automation is about the only thing that is keeping us competitive. Through automation, we are able to stay alive,” says Jeff Tuttle, Tru-Form’s President. “We lost $20-30m in business to China this year, but competing against foreign competitors with drastically lower labour costs is a challenge every single year.” Through increased automation, Tru-Form is competing by providing faster response, productivity, quality, and getting product to market faster than foreign competition.

The company currently has 13 Motoman robots in 12 work cells operating in its three plants. Nine of these robots are used for welding and the remaining four are used for material handling operations and R&D applications. 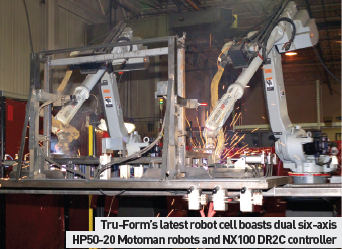 Very large racks and other parts are fixtured on two MHT-1500 headstock/ tailstock positioners. Each positioner has a 3,000kg (6,614lb) rated load. This robotic welding cell can handle extremely large parts, up to 132 inches (335.28cm) long and 80 inches (203.2cm) wide, and weighing up to three tons.

“The dual robots start welding in the middle of the parts and work their way out. This cuts our cycle time in half,” says Tuttle. “We do quite a lot of pulse welding on lighter 14- and 16-gage material with the new robots,” he adds. “Depending on the application, the robots have the flexibility to weave, touch-sense, seam-track or do standard GMAW or pulsed-MIG welding.

“We make a lot of dunnage racks used in the automotive industry, as well as subassemblies for these racks. For example, these racks might be used to hold windshields, door assemblies, powertrain assemblies, engines or transmissions. Parts are primarily mild steel, from 0.5 inches (1.27cm) to 16-gauge thick.”

Parts are batch run, and batch size varies widely. On any given day, Tru-Form makes 25 or 30 different parts in the various robot cells. The new welding cell makes complete parts. Other welding cells might weld four or fi ve different parts a day. A robot cell might run a hundred or parts per batch, per robot,” says Tuttle.

“All of the fabricating done for automotive suppliers is done on a just-in-time basis, so reliability is very important. The Motoman robots are highly reliable, so that allows us to produce consistent, high-quality parts to meet our customer’s schedules,” says Tuttle.

“Our people like the robots, too. It’s given them the opportunity to learn more of a skilled trade, and earn a higher pay scale. Getting involved with the robots really changes them. Instead of having to come in and weld every day, they get to learn about the robots. They can see how what they put in comes out.”