Success at Skoda is a digital process

Skoda is making more cars than ever, and the success of its venture is being supported by DELMIA digital factory solutions Process Engineer for integrated product and process planning, and the DELMIA V5 DPM Assembly for assembly planning

After the end of the Cold War, Czech carmaker Skoda, the third-oldest car manufacturer in the world, was looking for a partner to secure its long term global competitiveness – so it joined the Volkswagen Group. The new joint venture, Skoda auto a.s., began trading in April 1991 and became the fourth largest brand in the Volkswagen Group along with VW, Audi and Seat. 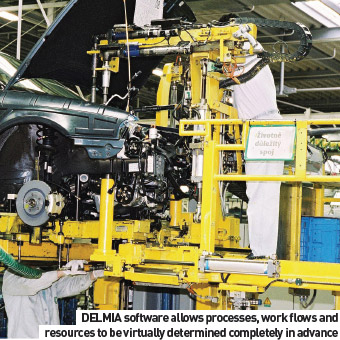 Since then, Skoda’s turnover, profits and staff have risen continuously. Nonetheless, the management team based at Mladá Boleslav is convinced that there still is great potential for optimisation. In order to preserve the annual gains in productivity of about 10 per cent it is relying on innovative planning and assembly methods and is supporting these digitally.

DELMIA’s digital factory has been profitably used over the last two years. The new 2007 Fabia, which is replacing the older model has been totally designed by digital means. Production planners are rigorously employing DELMIA tools to push parallelisation and link resources and processes with the product. In the future, sites as diverse as India, China and Russia will profit from the general availability of the data, as well as standardization of resources and production processes.

To enhance the creation of Digital Factory at Skoda, Dr Markus Baur of Audi joined Skoda two years ago and assumed responsibility for pre-series and project management in production. At Audi, he was responsible for the optimisation of products and processes, and managed the introduction of digital tools. “The Digital Factory represents all the production and logistics processes of the real factory,” says Dr Baur. “Securing and optimising production process at an early stage increases product quality, reduces the product design cycle and minimises modification costs”. According to Dr Baur, manufacturing influence must be exercised on the product in the early conceptual and development stages, in close co-operation with construction engineers. “All the time, we strive to improve the quality of our product,” says Dr Baur. “Our goal is: zero mistakes, right from the first vehicle.”

“Success follows when everybody understands that there are not different rival parties, but one common task shared between design and manufacturing,” points out Dr Baur.

To achieve Skoda’s ambitious goals for investment, production times, modification costs and so on, potential faults must be eliminated as early as the design phase, to avoid later expensive and time-costing modifications to the hardware. Baur explains: “We believe that the number of units produced of each model variant will decrease in the future, so factories are forced to become more flexible – process and plant maturity must go hand in hand with the complexity of the product”. 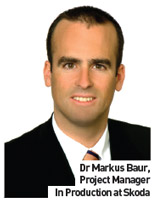 For assembly, both Skoda and Audi are using the DELMIA V5 DPM Assembly to digitally model the assembly planning, with the core integrated product and process data being held in the PPR-Hub. “DPE is mostly used by our process planning engineers for layout planning, balancing and time management and DPM for Assembly simulations and the new modules are being used to secure the products and processes,” explains Dr Baur. “CATIA V5 is used to enable simultaneous design at all our sites. “DPE and DPM have been in use for two years and they will soon yield a complete return on our investment.” At the moment, nearly 1,000 DELMIA licenses are used all over the group. p>Dr Baur shares the view of his colleagues at the other companies in the Volkswagen Group: projects featuring the Digital Factory need to be closely co-ordinated.

Skoda is following the template already created by VW and Audi instead of inventing its own methodology from scratch. Therefore, Dr Baur and his colleagues at Audi, VW and Seat meet regularly in a Volkswagen Group level workshop. “There, we reach agreement about the way forward, which system suppliers we will contract and how to design the various processes. We regard the Digital Factory as a working tool serving us to make our processes more efficient. Simplifying and bringing in parallel processes has delivered tangible benefits.”

“Whereas up to now at least two and a half years was reckoned to reach the product definition, concept planning and product design stages, an enormous time reduction has been achieved since we began implementing the DELMIA Digital Factory tools,” explains Dr Baur.

Following the belief that the first manufactured car should be ready to drive away, Skoda has increasingly rejected prototypes. Now prototypes are kept to a minimum to comply with legislation.

Even crash tests are now being performed virtually. “We are copying this methodology in production now,” says Dr Baur. “Processes, work flows and resources should be virtually determined completely in advance, so that we can run the complete factory virtually. This allows production to start without any modification work.”

The activities surrounding product design, process planning and allocation of resources are now addressed simultaneously in so-called “virtual process talks”; preferably as early as in the concept stage, and discussed by the specialized departments concerned. When the first product data are available, decisions on the industrial engineering are taken with the planning engineers. As soon as a vehicle’s manufacturability is assured, the solutions for the optimum structure of the plant are developed collectively. “Complete integration of data and processes and their worldwide availability are gaining increasing importance at all Skoda factories. Our cars are built with the same standard modules and we wish to maintain these standards through all our model series”, says Dr Baur. “It is a major advantage to have at one’s disposal the means to virtually optimise all assembly processes and flows. Only one year ago, we started to plan the successor model to the Fabia and have already accomplished the assembly planning, thanks to DELMIA”.