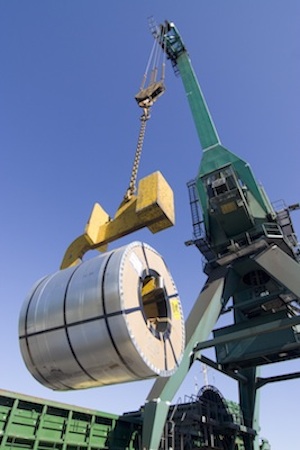 OEMs have to strike a balance when selecting the right materials for their vehicles. These materials need to be strong enough to protect passengers in the event of a collision, yet light enough to reduce CO2 emissions and increase fuel efficiency.

In order to meet these demands, carmakers are evaluating lightweight alternatives to steel for a wide variety of applications. In 2014, Ford grabbed the headlines when it started to produce its market-leading F-150 with an all-aluminium body. In April 2015, BMW announced that the chassis of its 2016 7-Series will feature the extensive use of carbon fibre-reinforced plastic (CFRP) to strengthen key parts of the structure, including the B- and C-pillars, and the roof bows. Despite being more expensive than steel, the use of both these materials in automotive applications is expected to explode over the next decade.

Steel rises to the challenge
The steel industry is not taking these challenges to its supremacy lying down, and is investing significantly in the R&D of stronger advanced and ultra-high strength steels (AHSS and UHSS), so that carmakers can do more with less material.

Philippe Aubron, chief marketing officer for automotive Europe at steel-maker ArcelorMittal, says: “We have increased the percentage of AHSS in our product portfolio from roughly 10% six or seven years ago to around 25-30% today, and this percentage will increase significantly in the future.”

AHSS is defined as a steel that demonstrates an ultimate tensile strength (UTS) of over 500MPa, while UHSS is a steel that possesses a UTS in excess of 980MPa. These materials are used primarily in the body-in-white (BIW) of vehicles to produce components that must adsorb large amounts of energy in the event of a crash, such as the side, front-side and rear members.

According to Chris Wooffindin, product marketing manager at Tata Steel: “The lightweighting potential of UHSS is dependent upon the component application and the strength of the UHSS grade. Assuming the replacement of conventional micro-alloyed high-strength steel with a strength level of 340MPa – and for a component requiring bending strength – UHSS grades could reduce the weight of a part by 30-50%, achieved by reducing the gauge of the component.”

"Using steel is by far the cheapest way to save weight in a car. When you switch to aluminium or CFRP you are going to spend much more…”
– Philippe Aubron, ArcelorMittal

Furthermore, the use of less material compensates for the higher cost of UHSS; a lightweight UHSS component can be produced for a similar unit cost to one made from conventional steel. Aubron continues: “Using steel is by far the cheapest way to save weight in a car. When you switch to aluminium or CFRP you are going to spend much more, at least three to four times more for aluminium and significantly more for CFRP. [OEMs and their suppliers] already have the stamping machines and the welding machines; everything is in place so they don’t need to make any major investments to use UHSS.”

Form & function
Of course, significantly lighter components can be made from aluminium and CFRP than is currently possible using UHSS. Moreover, the use of UHSS does present a number of challenges to OEMs and their suppliers despite their familiarity with conventional steels.

Extensive use of advanced steel grades in a C-segment vehicle
Chief among these challenges remains formability. For example, martensitic steels are – as their name indicates – mostly martensitic, with some small amounts of ferrite and bainite. Introduced in 2014, SSAB’s Docol 1700 M martensitic steel demonstrates a tensile strength of 1,700MPa and possesses high energy absorption characteristics. It is particularly suitable for the production of lightweight steel bumpers. However, this steel is difficult to form using any process other than roll forming.

Wooffindin says: “The challenge when using any material with very high strength lies in achieving the required final shape without the material rupturing or demonstrating high levels of distortion caused by spring-back.”

After a flat-rolled metal is cold-worked, and as the forming force is released, the metal tends to revert to its original shape owing to its natural elastic properties. This spring-back is influenced by a number of factors, including tensile strength, yield strength after forming and thickness.

Stamping it hot
One way to produce components with relatively complex geometries and limit the problem of spring-back is to use hot stamping. In this process – first employed in the automotive industry by SAAB in 1984 – a blank is heated in a furnace to its austenitisation temperature of around 900°C, formed in an internally cooled die set, and quenched under pressure at a minimum cooling rate of 27°C per second. This minimum cooling rate ensures the formation of a martensitic microstructure in the part, which gives it high strength.

"The challenge when using any material with very high strength lies in achieving the required final shape without the material rupturing or demonstrating high levels of distortion caused by spring-back”
– Chris Wooffindin, Tata Steel

Boron steels have been developed specifically to suit this process, such as ArcelorMittal’s Usibor 1500 and Tata’s HQ1500, both of which demonstrate a tensile strength of around 1,500MPa after hot stamping. The resulting components possess high accuracy in terms of their final shape.

The entire process, from heating the blank in the furnace to stamping in the die takes five to ten minutes, but evolving furnace technology has enabled a production rate of one part every 20 seconds or so. The use of hot stamping is increasing in the automotive industry; 40% of the BIW of Volvo’s XC90 is produced using the process. However, the energy required to heat the die makes hot forming more expensive than cold forming.

Spring-back simulation
Steel producers have developed computer-aided simulations that enable their customers to anticipate the amount of spring-back that a given component will exhibit, allowing them to tailor their cold-forming processes to limit this problem. Furthermore, a number of third-generation AHSS and UHSS grades are nearing commercialisation that will be easier to form using room temperature processes.

Announced in 2014, ArcelorMittal's Fortiform range of ductile AHSS has been developed specifically for cold stamping, and could reduce the weight of components now produced using dual-phase (DP) steels by up to 20%. Designed to replace these DP grades, Fortiform was developed by ArcelorMittal’s R&D teams in France and the US.

The Fortiform range currently consists of three steel grades. Fortiform 1050 is the first product in this range to be available on the market. As a result of its high tensile strength, Fortiform 1050 steel is particularly suitable for the production of parts that must absorb energy in the event of impacts. The steel has been characterised in dynamic axial compression tests using an omega structure with a spot-welded closure plate at an impact velocity of 56km.h–1, tests which have demonstrated its positive impact behaviour. The first serially produced vehicles to use this steel will roll off production lines in 2017.

Two other grades, Fortiform 980 and Fortiform 1180, will be released by 2017. Samples were available to manufacturers for testing in 2014, with industrial production starting in 2015. Other products are set to follow.

The company claims that OEMs will not need to make significant changes to their production lines in order to accommodate these new grades. Minor modifications to spot welding parameters will be required – given the increase of the carbon equivalent, it is necessary to increase the welding force and adapt welding cycles – but as less steel will be required to produce a given part than was needed using DP grades, the additional cost of implementing these grades on production lines could be almost zero. 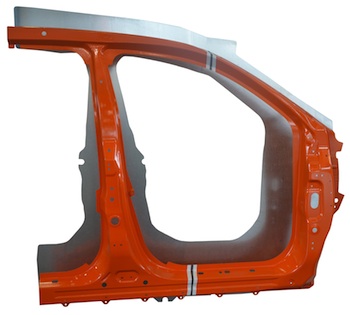 The door ring of the Honda 2014 Acura MDX SUV features Usibor 1500 from ArcelorMittal
Grades for cold forming
Meanwhile, NanoSteel – a family of nanostructured ferrous alloys made by a US company of the same name – demonstrates elongations of over 20% at ambient temperatures, which presents opportunities for cold forming that are impossible using current AHSS and UHSS grades.

In conventional steel, the grains and matrix that comprise the structure of the material are measured in microns. NanoSteel’s alloys are nanostructured, meaning that they feature grain and matrix sizes smaller than 100nm. These nanoscale microstructures impart singular mechanical and physical properties.

The NanoSteel alloys exploit two new mechanisms that allow the creation of nanostructures in high-temperature production environments and deliver unique properties upon deformation. The first mechanism is called NanoPhase Refinement. While most nanomaterials experience grain growth when exposed to high temperatures, the company’s NanoPhase Refinement mechanism refines these grains, maintaining these favourable properties. The second mechanism is Dynamic NanoPhase Strengthening, which occurs after yielding and provides both high strain hardening and usable ductility when the material is formed into automotive parts.

NanoSteel is working to provide samples of these alloys for trial by vehicle-makers such as General Motors, which has invested in the company through a subsidiary.

Challenges in joining
Joining AHSS and UHSS components can also be challenging. Wooffindin says: “UHSS grades can feature relatively rich metallurgies that are needed to achieve the desired properties, and these metallurgies can require additional attention when joining, especially compared with conventional steel grades.”

Spot welding remains a viable option when using these materials. Still, welding Usibor, for example, requires some adaptation to the process according to welding machine producer AWL-Techniek. Usibor is coated with an aluminium-silicon (AlSi) material that ensures that the steel does not oxidise during hot forming and imparts good corrosion resistance to the final component. However, the aluminium in the coating can influence the welding process. As such, particular attention must be paid to the precise positioning of the electrodes during spot welding and a lower current density must be employed. 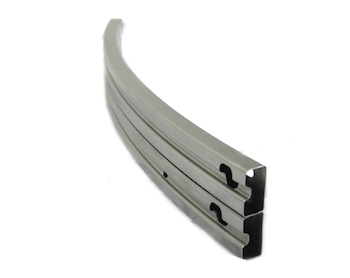 ArcelorMittal has developed laser ablation technology to help negate this problem. Laser ablation can vaporise the AlSi coating from the surface of Usibor where it is to be joined. This enables the steel to be laser welded. Indeed, the company supplies laser-welded tailored blanks, which can comprise a number of different grades of steel, for forming by OEMs and their suppliers. The use of these blanks ensures that the right material is used in the right place in the component, and helps to minimise the number of subsequent joining operations required.

Welding UHSS and aluminium components is incredibly difficult, but myriad joining methods are currently available to carmakers. Adhesive bonding could be a practical alternative, and can be used to increase the energy absorption of a structure in the event of a crash. Mechanical bonding is also increasing in popularity, especially with OEMs producing aluminium-intensive vehicles.

As lightweight materials, UHSS and AHSS represent good value for money and their use by OEMs will increase substantially in the next five to ten years. However, as regulations stipulating fuel efficiency and CO2 emissions become ever more stringent, the high price associated with the use of rival aluminium and CFRP could become less of a hurdle for OEMs. The steel industry will continue to innovate to maintain its competitive advantage.