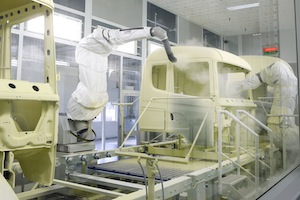 The facility has a low environmental impact owing to its powder coating method, which avoids the use of solvents. Scania Oskarshamn has been using powder coating for two decades, but the process has been refined over time. At the new priming shop, which was launched last month after a two-year construction period, powder wastage is just 2%.

Cabs are pre-treated by alkaline degreasing and rinsing; the next stages are phosphatising, rinsing and drying. The primer is applied in powder form and then dried.

The cabs produced at Oskarshamn, which has a total workforce of 2,000 personnel, are delivered to Scania’s three European final assembly plants in Sweden, the Netherlands and France, and are also included in exports of kits from Europe for local assembly elsewhere.