Safe in the knowledge

FlexArc is a new palletized arc-welding cell that’s preconfigured with safety and welding equipment. “We make it very easy for customers to focus on the tooling and process because we do 90 per cent of the integration of the equipment.”

FlexArc cells are capable of 15 different metal fab applications. To date ABB has sold about 50 and Minkebige says they’re on track to double that for 2007.

Simple to use safety 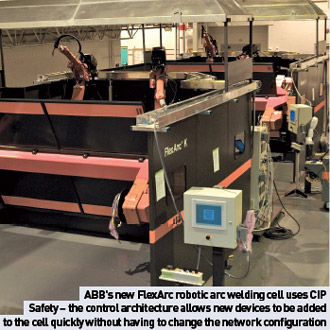 In terms of safety, the FlexArc cells share a common CIP Safety platform using DeviceNet. Minkebige says the integrated safety was a response to customer demand.

“From a customer point of view, they want to buy a solution that’s safe out of the box,” he says. “With all the downsizing, these manufacturers don't have a lot of resident experts anymore. They’re parts producers, their focus is on manufacturing, and they've staffed accordingly.

The time when you had in-house safety experts on every technology is long gone. Now they look to the suppliers to provide them with a solution that's safe so they can focus on their part of the business and keep their customer’s satisfied.”

With this in mind, ABB knew it was necessary to integrate a safety network solution that was robust, easily expandable, and simple to use. It also had to ensure operator safety by conforming with the IEC 61508 up to Safety Integrity Level 3.

To fulfill these requirements, the company opted for CIP Safety using DeviceNet. The FlexArc's robot controller already communicated over DeviceNet, so information can be transmitted easily from safety devices – safety mats, light curtains, interlocks – directly into the robot and displayed on the robot’s teach pendants without the need for additional hardware. The result is greatly reduced control and wiring costs; plus the commonality of parts and standards will eventually lead to reduced training costs as operators become familiar with the system, says Minkebige.

Shared network An extension to the Common Industrial Protocol (CIP), CIP Safety consists of the objects, services and profiles needed for safety devices and applications. Since safety functionality is incorporated into each device, rather than in the network infrastructure, CIP Safety allows both standard and safety devices to operate on the same open network. This allows users a choice of network architectures for their safety networks and allows safety devices from multiple vendors to communicate seamlessly across CIP networks to other safety devices.

“With CIP Safety, you can have another DeviceNet master in the system that queries the safety and be able to display that information on human-machine interfaces and other things,” says Minkebige. “It makes the system less cryptic, so people can understand why the cell is doing what it’s doing – whether there’s a gate open, or someone pressed an e-stop for instance.”

In the past, during the era of hardwired relays, technicians would have to open up a cabinet, take a look at the relays and see if they’re on. It required far more knowledge on how the system actually worked.

“The main thing with the safety, you want it to protect people, but you don’t want the cell to lose production because people don’t understand how the safety works or have them search around when someone presses an e-stop,” says Minkebige.

With CIP Safety, if someone presses an e-stop or trips a light curtain, it shows right up on the robot's teach pendant. The system is visible as to how it’s all interacting – staff can immediately see if a light curtain's broken rather than having to go querying around the cell to find the cause.

"Basically the automakers are looking for as much diagnostic information as they can get their hands on when it comes to the safety status of their production equipment. What [safety] device is causing a stop to occur? Was an operator entering the cell when they shouldn't have? If it's a fault condition, what is it?

A short circuit, stuck in high, cross circuit? With CIP Safety there are lots of different faults that are monitored. It gets that information into their hands quickly so they can make a quick decision on what needs to be done – above and beyond just replacing a component." 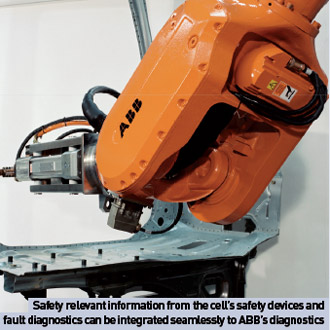 It was also a primary reason why ABB gave CIP Safety the nod for its new FlexArc robot arc welding cells.

With the FlexArc cells, what ABB was looking for was a means of solving the safety relevant part of their application and having diagnostic information available to present to an operator interface.

The technology means safety relevant information from the cell's safety devices and fault diagnostics can be integrated seamlessly to ABB's diagnostics and human-machine interface.

Prior to this, ABB had to rely on safety relays that provided minimal diagnostic information, such as on/off and fault only. The increased quantity and availability of information available thanks to CIP platform allow plant staff to make rapid decisions about their safety and other manufacturing processes

"ABB was also looking for a programmable solution," says O'Laughlin. "The way the system works is there's a safety network controller, which is a safety-rated PLC, and then some remote I/O where they're gathering all the safety-related information, performing logic associated with it, and allowing robot to be in 'run' or 'not-run' condition depending on whether the safety system is in a safe state.

"The reason they picked DeviceNet Safety was because they already had DeviceNet capable components in the system, and this allowed them to tie the two systems together so they would have the ability to have a single operator interface, and provide both standard and safety-relevant data with regard to the robotic system." 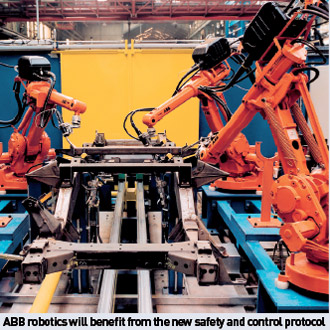 The technology has also made modifications around the cell much easier. “Another benefit is that, because it's a programmable safety device, if you do any modifications, you use the same type of architecture for a number of different safety solutions,” says Minkebige. “For example, we have different types of cells and we use the same type of base panel. Depending on the safety requirements of the cell, you can easily reconfigure the cell to do what you want it to do.”

If you wanted to add another door or robot controller to the cell, or change from horizontal to vertical light beams in an area scanner – if you have that as programmable, as opposed to a hard-wired circuit, it makes it extremely flexible to adapt to the market quickly, without spending a lot of time and resources coming up with hardwired prints. With CIP Safety using DeviceNet, you just reprogram.

Another boon to common architecture is ease in handling different safety requirements in different cells.

“Basically you can have one panel and wire in the safety devices to the I/Os. You don't have to have a custom panel every time and you save a lot of real estate in panel space.”