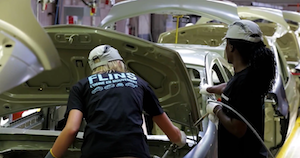 France - The OEM has said it will spend €1 billion (US$1.16 billion) on the development and production of electric vehicles (EVs) in France. This will play an important role in its 'Drive the Future' plan, in which one of the goals is to bring 8 pure electric models and 12 electrified models to market by 2022.

Specifically, it plans to start making cars based on a new EV platform at its Douai plant, double the output of its Zoe at its Flins plant ahead of the launch of the next generation model, and triple electric motor production at Cleon ahead of introducing a new motor in 2021. It has also promised to build a new EV production site as well as invest in its Maubeuge plant before introducing the next generation of the Kangoo family, including the electric Kangoo Z.E.

"The acceleration of our investments in France for EVs will increase the competitiveness and attractiveness of our French industrial sites," commented Carlos Ghosn, CEO of Renault. "Within the framework of its Drive the Future strategic plan and with the Alliance, Groupe Renault is giving itself the means to maintain its leadership in the EV market and to continue to develop new sustainable mobility solutions for all."