Can motor racing ever be environmentally sustainable? It depends what questions you ask. AMS talks to Honda Formula One environmental engineer Jamie Shaw to find out how green the industry really is

Throughout the 2007 season, the Honda Formula One team ran with a distinctive livery. Eschewing traditional sponsors, Honda ran with a concept tagged as ‘Earth Dreams’, its cars dressed to display the planet as seen from space. The team also ran a tireless campaign to promote the green agenda, work which recently saw it claim victory at the UK 2007 Green Awards.

Many people shake their heads at the thought of environmentally-responsible F1: the concept at best is an oxymoron. Invariably their views tend to be narrow, and based on racing, the sharp end of the sport. This perception doesn’t look at the much bigger business of manufacturing. But Honda F1 hasn’t ignored the latter in its green quest. At its Brackley, UK factory, the vehicle maker recently employed a full-time environmental engineer. Jamie Shaw’s role is to oversee the evolution of the site, shrinking its environmental impact, minimising environmental risk, and educating the workforce. It is, he acknowledges, not the sexy end of F1 engineering but it does play a significant role in the development of an F1 team, while not being entirely selfless.

Environmental management is one of those rare tasks where virtue does not necessarily have to be its own reward. “Environmental management isn’t a cost that a company has to absorb,” says Shaw, “usually it has a positive effect in terms of efficiency and therefore budget, because an effective environment management programme cuts waste and decreases energy use. When you achieve those two things, invariably you also cut costs.” With six years of experience in environmental management at British Aerospace, Shaw’s new role is a first for Honda F1. “It’s an unusual sort of place to do this kind of job,” he acknowledges, “but that’s good: it means there’s plenty of scope for improvement.”

Audits of energy consumption
F1 may be at the cutting edge of technology, but with a couple of prominent exceptions, its facilities tend to be mundane. Honda’s industrial units are no different, and are a primary target for investigation. “Detailed energy audits of all the buildings on site are ongoing. An external agency is examining our energy use and will recommend ways to cut this, and maybe acquire our energy from renewable sources.

Beyond energy management, Honda’s environmental engineer literally looks after the nuts and bolts of the site – reducing waste, cutting pollution, and encouraging suppliers to get involved. It might not completely offset the impact of racing – but it is a move in the right direction, and sometimes that is the best that can be done. Shaw adds, “Rather than sending everything to a landfill site, there could be organisations that might see what we consider waste, as a resource.” One man’s junk is another’s treasure. In this interview, Jamie Shaw details his day-to-day duties and how he sees the Honda F1 becoming a responsible custodian of the environment. 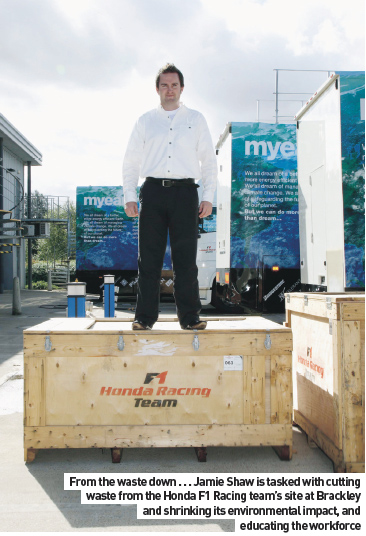 AMS: What are your responsibilities?
Jamie Shaw: The first thing is to ensure the team is legally compliant, because there is so much environmental legislation in the UK, and more legislation is being enforced, whether it is from Europe or UK-specific. The main task is putting in place a system so that we can understand the legislation that applies to us and make sure that we are compliant. But this also ensures that we can keep up-to-date with forthcoming issues and any changes we need to make. Beyond that it is all about minimising environmental risk for our activities as an F1 team, mainly at Brackley where the cars are designed and manufactured, but also our activities around the world at the various race circuits. Wherever possible, we want to make sure we are not doing anything to negatively impact the environment.

AMS: Which aspect of environmental legislation demands most of your attention?
JS: Waste management is probably the biggest single issue. Also, further legislation is in the pipeline, on the way to deal with the energy efficiency of buildings. Water pollution is another big factor. At least the Brackley plant has a river running through the site. Then there are issues such as oil storage we need to comply with. I concede it isn’t the most interesting aspect of F1.

AMS: Is an F1 team a difficult place for an environment engineer to work?
JS: It is certainly an interesting place to work, though the reality of the challenge is probably the same as anywhere else, because the legislation applies whether your facility has five hundred or ten thousand people. The product and the nature of our activities are unique, but there is plenty of scope for improvement, because this isn’t something that has been scrutinised before.

AMS: Most vehicle makers would look at a project aimed at minimising waste and energy consumption as an opportunity to make cost savings. Is that still the case with a production run measured in single figures – or are the benefits of this project more in the field of PR?
JS: We do spend quite a lot on waste management but I think there are opportunities to cut costs there. We have to use energy – it is in the nature of what we do, but there is plenty of scope for improvement, and so we will gradually purchase energy-efficient lighting, for example, and when we are upgrading or installing new plant equipment, there is obviously a mandate to ensure the new is more efficient than the old. Given that the cost of energy is escalating, we should be able to make significant cost savings – cost avoidance as well.

We’re looking at everything, trying to identify areas where we can improve. Obviously a facility like our wind tunnel uses a lot of energy, but if our reporting shows there really wasn’t any opportunity to improve because it was the most efficient the current technology allows, then obviously it would be something we would have to park and come back to further down the line. At the same time, maybe we can implement a plan to get that energy from renewable sources, rather than burning fossil fuels. AMS: As the first environmental engineer employed on the Brackley site, is part of your job to be an educator?

JS. We are not starting from zero. The workforce is knowledgeable – making F1 cars demands it – and lots of people at Brackley are keen to make their contribution. There’s lots of information in the media at the moment – rarely will there be a news programme that doesn’t feature an environmental story of some sort, so people are generally more aware than ever of the issues of climate change and environmental protection.

What we do here builds on that, engaging employees in the process and letting them know what they can do themselves – not just here on site, but at home as well. Many good practises are habitual. If there is something you do at home, you will automatically do it at work, and vice versa.

AMS: Which is more important – large-scale projects or micro-management?
JS: Both have a part to play. Everybody doing a little bit accumulates into a big change. Arguably it is the little changes that are easier to implement and have immediate impact, but there is room for everything. As for the plant, it might be a recommendation from the external audit company that we install solar panels or something of that nature, to drive down our need to consume power.

It brings the process down to the level of the individual building, rather than the entire company, and a major project like this will engage with the employees in each building at a micro level. We are also studying our waste management profile to identify alternatives to landfill. Are there organisations out there that may have some need for what we class as a waste material? We’re certainly trying to develop things that way.

AMS: While environment management is possibly a new concept for a Formula One team, it isn’t anything new for Honda. Will there be corporate knowledge and resources that you can draw on?
JS: Absolutely. Honda has had a manufacturing presence in the UK for a long time, with a deep-seated environmental plan. One of my first tasks was to visit the Honda UK Manufacturing (HUM) facilities in Swindon to meet the safety and environmental team and understand its systems and methodology. The biggest driver now is the zero waste to landfill project. I’m looking to tap into that expertise wherever possible and acquire any knowledge that can be applied here.

Honda is providing us with the opportunity to go racing, so it is important for us to tie in with its environmental targets and objectives wherever possible. Having said that, we make Formula One cars, which is a task that has a different set of environmental risks associated with it compared with manufacturing road cars.