Quick off the mark

Robotics experts are helping OEMs to realise prototype models in record time to speed up the new vehicle development process. AMS looks at two systems from Kuka and ABB

Only a small circle of developers and design experts know what the cars of tomorrow will look like. They create vehicles long before they hit the market. At Audi in Ingolstadt, for instance, a Kuka robot produces structural components in the non-visible area to manufacture a prototype. But vehicle makers like Audi are having to complete this prototype stage as fast as possible to ensure market advantage.

“The rise in the number of vehicle models coming onto the market and the increasing derivatives combined with shorter production cycles necessitates a significant reduction in development times,” Andreas Melcher, engineer at the Audi pre-series centre, explains. Here, steps are being taken to meet these demands by using manufacturing processes similar to those in series production as early as the testing phase. This enhances the accuracy of the test results, for example in crash tests.

At an early phase in the development of a product, the concept phase, a certain number of different body components are required – in very small batch sizes – to build a drivable prototype on which to base product decisions. To make this concept vehicle appear as realistic as possible, the body components are made of the same materials (steel or aluminium alloys) as the subsequent end product. Conventional manufacturing processes, such as deep drawing, are not economical because of the high costs of the tooling. For this reason many parts are formed manually using a sheet metal forming model.

This is a highly human-intensive activity that is strenuous and requires a large amount of skill. The challenge is to automate parts of these tasks, thus relieving the burden on the human workers.

At Audi the decision was taken to opt for alternative forming processes, such as incremental sheet metal forming.

In this process, the part is formed step by step using a forming tool that moves around the contour of the part at a constant height. The height of the tool is adjusted vertically by several tenths of a millimetre between each run. The machining paths are calculated on the basis of the CAD data of the body component.

Universal, finger-shaped tools with spherical tips are used. The resulting punctiform point of contact between the tool and the workpiece significantly reduces the forming forces required compared with deep drawing. 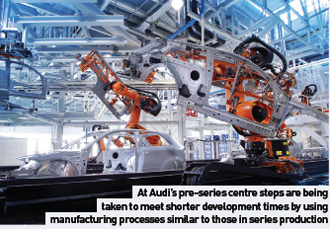 A combination of gantry machines and industrial robots is used for this process. Initial trials with a Kuka robot convinced Audi engineers of the advantages of the process. A concept was drawn up and implemented for a system that could be integrated smoothly into the existing shop layout.

This system is centred on a KR 210 L180 robot, mounted on a linear unit, and two machining tables. “The main challenge we faced was the development of the fixture for holding the metal sheet,” Marco Lorenz, Project Manager at Kuka says. “We were looking for a solution that is flexible in terms of workpiece size and in which the height adjustment is synchronised with the robot motion.” The result was two machining tables that can be flexibly adapted to the size of the workpiece and which allow the production of sheetmetal parts up to 1500mm x1700mm in size. If required, they can even be combined to create a work surface 1500mm x 3000mm in size.

On the robot is a tool mount (HSK 80) that enables the tool to rotate freely and allows automatic tool changing. This makes it possible to try out forming tools with different diameters, lengths and materials. An automatic system for oiling the workpiece is also integrated.

A male mould, over which the metal sheet is formed, is required for the preferred process variant. The male mould is positioned on one of the two machining tables and the metal sheet is clamped above it in the fixture. The CAD data of the workpiece form the basis for creating the machining paths. The first step is the creation of CNC programs which are then converted into robot programs using CamROB software. There is no need for time consuming teaching of the robot.

Equipped with the tried-and-tested VKR C2 controller, the robot executes the machining paths, initially at a constant height. The robot then adjusts its height.

In principle, the robot can work overnight and the worker can assess the results in the morning. “The process is comparatively very fast,” Lorenz continues. “Forming tasks that would have taken all day if carried out manually can be completed within a few hours by the robot.” 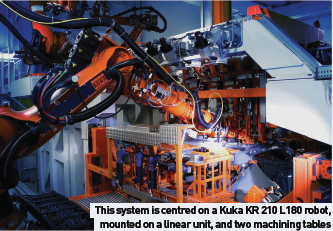 Another challenge facing such production lines is one of equipment reusability. In the past, a production line was specifically designed for a single car model. When the time came to introduce a new model, a new line had to be designed and built. Such a solution required considerable investment and lead time.

ABB, as a robots supplier and system integrator, has always recognised the value of making such “carry-over” operations as smooth and simple as possible. The first element of this lies in enabling cost savings by permitting as much equipment as possible to be reused. However, although the carryover of individual robots and other components may be relatively simple, they must still undergo the same configuration and test cycles as new equipment. To provide greater reusability while simplifying the configuration process, ABB introduced Flexi-Base. A FlexiBase is a modular robot cell in which the robots, controllers and cabling are pre-mounted on a platform. This is set up and tested in the ABB factory and delivered to the customer as a working module. It requires only minimal configuration before it can start production.

This saving is repeated when the cell is reused.

ABB is now proposing a standard cost-competitive solution to compete with manually operated bodyshops: FlexLean. The basic concept of the system is very simple. It builds on the FlexiBase principle, while further raising its adaptability. The “lean” in its name reflects the simplicity, the standardisation level, and as a consequence the cost reductions that it enables – making it able to compete with manual labour in low-cost countries, while delivering savings over other robot solutions in higher-cost countries.

At the heart of the concept lies the recognition that customised solutions, multiple technical specifications and dedicated software are major causes of costs and engineering uncertainty.

The answer lies in robot technology and standardisation: Two types of such cells are offered; one for geometrical assembly and one for re spot. These come with a choice of pre-defined configurations: several process packages (such as spot welding, gluing, roller hemming) are available for the assembly cell. The number of robots in the re spot cell is scalable from two to six.

All equipment belonging to a Flex-Lean cell, including the controllers, is located on a FlexiBase (steel frame base). This base contains all piping and cabling, resulting in a clean surface that can be walked on without danger of tripping.

The compactness is further optimised through newly designed hollow robot risers permitting the IRC5 drive to be located just under the robot.

After start up and commissioning at ABB’s facility, each cell is disconnected from power and adjacent cells and delivered by truck to the customer plant, where re-building of the line is achieved in just a matter of hours.

In a production line using FlexLean each cell is a standalone system. During start up and commissioning, staff can work on isolated cells, as each such cell is controlled by a complete set of automation modules, including a PLC and a manmachine- interface.

These modules communicate through a three-level bus system: FieldBus for real-time process, SafetyBus for critical I/Os and Ethernet for generic information Because the controller cabinets look similar to the IRC5, this solution also integrates well visually with the ABB product range.

The standardisation of products used in the cell is not only advantageous for cost reduction, but is also a big advantage for the control system.

Complex PLC programming operations are no longer required: every component of the cell is known and the required PLC code is written once for all.

However, one part of the automation still remains variable – the part that is related to the manufacturing process itself. Here lies what is probably the most innovative aspect of this solution: instead of hard coding the specific process, FlexControl integrates a configurable sequencer.

The traditional time-consuming process of programming, compiling, transferring to the PLC and finally debugging the generated code is no longer called for. Now it is just a question of configuring the sequence of operations for each actuator (robots, FlexPLP, clamps etc) by selecting one of the possible operations from a list. The mode switch is then flicked to “auto” and production begins. It is so simple that a PLC programmer is no longer needed to modify the process steps; the person setting up the program merely has to know what he wants FlexLean to do.

In production mode, the sequencer is used to display the process status with colour codes. 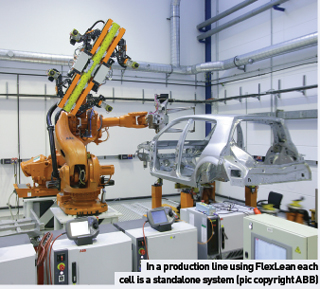 A state-of-the-art production line for small cars completes a vehicle every 45 seconds all day and every day. The bodyin- white (BIW) is typically assembled from 200 to 400 parts (including the parts used to make sub-assemblies) within this short time. Furthermore, production lines are in existence that can handle a mix of four different models.

In future lines, this number may be doubled. There is, however, a limit to the number of models a single line can handle. This comes from the logistics of supplying the parts to the cells: besides the organisational complexity required to handle the increased parts inventory, one fundamental problem is that bringing more part types into a cell demands more space around the cell, and this is already scarce.

Innovations in robotics serve to make robots easier to set up, use, and reuse, while cutting back constraints such as space requirements and time lost during operations.

These advantages are helping position robots in increasingly challenging applications.

In the growing Asian market, manually operated installations are still the norm, and robots are only used if heavy duty and accurate operation is required. An example of this is the company’s FlexFramer, a car framing station in which two robots manipulate the 500kg tooling used to enclose the car body to ensure its geometry. Considering the complete line, however, this arrangement does not require many robots.

Utilising ABB’s FlexLean system it is now possible for the customer to get the fl exibility and reliability of a robotized installation at the price of a manually operated one. Moreover, this solution requires up to 40 per cent less fl oor space. The compactness in the modular solution is an advantage from the point of view of quality and logistics (supply of parts). Its scalability is also of advantage when future car models are introduced.