Nissan is renowned for its innovative designs and they reflect the spirit of the organisation. Its aim is to offer customers “competitive products and services to meet their needs and delight their senses” and to do this all areas of the business must be operating in harmony with each other.

The introduction of the new Qashqai model is an exciting and busy time for the Nissan team and it must work incredibly hard to ensure that the quality of its processes is optimal. Having the right systems for the job is critical to the success of an introduction, but Nissan wanted to take the challenge one step further and reduce the time scales for the new model by as much as 50 per cent. 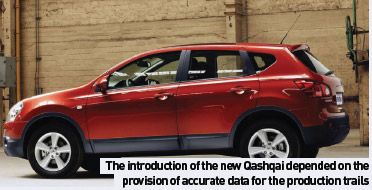 The production of a car is an exact science and great care is taken at every stage to ensure that quality is at the top of the agenda. When the final vehicle is assembled in volume all parts must fit together perfectly to create a vehicle that performs to customer expectations whether that be appearance, like gaps around panels, or function like the smooth closing of a door.

To achieve this, Nissan conducts a series of pre-production trials in which limited numbers of vehicles are built and tested. First of all, key components are identified and measurement data is requested from the numerous suppliers of these parts. In addition, there are a number of complex shaped panels produced in-house in the press shop, all of which are measured using various co-ordinate measuring machines (CMMs).

The body shop welds the panels together and further measurements are made, again with a mixture of CMMs, laser and manual checks. The body passes through the paint shop and finally to trim and chassis to assemble the vehicle, where yet more measurements are taken with devices like laser gauges to measure gap and flush.

From this mountain of data the purpose is to identify potential problem areas, and then to identify the cause. If a door doesn’t shut smoothly, is it the hinge (size, location, orientation)? the lock?, one of the panels?, the aperture? the way the door has been hung?… the possibilities are huge.

Nissan needed a system to pull all of this data together and help them quickly identify the root causes so that action could be taken before the next pre-production trial and, of course, before mainstream production.

The process for new model launch is very data intensive. With parts coming into the plant from many different suppliers and many other components being produced on-site, management of the data is critical to the successful completion of the production trials.

Dave Warne, Engineer at Nissan, comments: “Any new project generates huge amounts of data, largely in the form of varied spreadsheets, but also ASCII files from 3D CMMs and laser gauges and paper has not yet been fully eradicated. This creates a huge challenge for management, analysis and reporting. 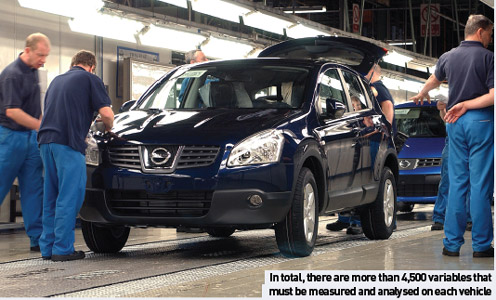 We really needed a system that would handle the data seamlessly and provide a graphical representation of the information to aid our decision making process and enable quick response to alerts on the shopfloor. Lighthouse has already proven itself in this area and we were confident that its software was the right tool for the job.”

The new system for production trials had to make sense of the incoming data, transform it into valuable information and it had to address the need to reduce new model introduction time scales by around 50 per cent.

The Powertrain group at Nissan was already using Lighthouse’s Shopfloor-Online to provide a single and comprehensive view of the factory processes in place and to integrate the various data feeds into one information source from which to raise alerts, monitor quality and make process related decisions. The software had been in place for some time and was proving incredibly beneficial to operators and managers alike.

Tony Wardropper, Senior Engineer – Quality Assurance at Nissan Motor Manufacturing, comments: “We have pioneered the Lighthouse system in the Powertrain group and this new model project represents a great opportunity for us to demonstrate its capabilities to other parts of the Nissan business. So far, it has been very well received by the engineers involved and the management team recognise its value to the production cycle.”

There are also a few manual checks recorded.

In total, there are more than 4,500 variables that must be measured and analysed on each vehicle, which is quite feasible using a factory information system but virtually impossible and incredibly time consuming using a spreadsheet system. Historically one of the biggest problems was simply gathering all the data. The previous array of 63 or more spreadsheets did not facilitate easy analysis and was far too cumbersome to produce timely and useful reports. The knock-on affect on the decision making process is significant.

However, now, all of the information is available in one place. The system knows what, if any, data is missing so that it can be quickly chased down. The analysis and reports are there at the click of a button and allow high-level views that can then be successively drilled into, to explore problem areas. The system is browser based so everyone in the plant can readily access the same information wherever they are.

The management meetings are based on concrete facts rather than the subjective views and conjecture of the past. The system is open and makes all information immediately visible.

Dave Warne observes: “The information is 100 per cent transparent during the trials and this makes for very open conversations amongst the management teams. Nothing is hidden or vague so issues are clear and it means that we are better able to deal with them quickly and effectively.

Essentially, the new systems are bringing all of the data together and making it into something that is useful. The speed of producing information is unbelievably quick and we can cut and dice the data in many ways and present it in a manner that suits individual requirements.”

The system was put in place for the first production trial (PT1), and was further developed through subsequent production trials. Now, as the Qashqai has moved into mainstream production, the system is there to support the on-going manufacture. The Nissan team in Sunderland has achieved one of the fastest new model introductions, in just six months. Management of the data was central to achieving this, identifying problems for quick resolution and giving the confidence for mainstream production.

Looking forward, Nissan would like to replace the current spreadsheet method of collecting data from suppliers by providing them with direct access to Shopfloor Online via the internet. This would further ease the flow of information across the process and reduce integration needs for the system as a whole. It would also give suppliers access to the analysis tools and reporting. Essentially, Lighthouse would become the standard for data communication and analysis on the shopfloor and help to improve further the plant’s performance.

In conclusion, Dave Warne says: “The Lighthouse software has demonstrated itself as a potential source of all data on our Sunderland plant shopfloor. For this new model launch process the system has been designed very quickly, in just nine weeks.

As a result, we have had to compromise in some areas. We will be addressing these issues as we progress from here and continue to develop the system to best meet our changing needs. To get a new model production project in the UK is a tall order because of our high wage costs in this country compared to other parts of the world. This means that we have to operate much smarter and systems like Lighthouse help us to do just that.

The payback benefits of Shopfloor-Online far outweigh its costs and we look forward to a long and productive future with Lighthouse.”