Pump up the volume

Mention composites in the context of car design and thoughts automatically turn to the exotica at the fantasy end of the sports car sector: the million-dollar ultra-low volume 320km/h super cars that are the preserve of the über wealthy. It isn’t something considered as a serious mainstream technology, but the attitude towards it is changing.

With a touch of irony, it is precisely those people responsible for iconic super sports cars such as the Ferrari Enzo, Porsche Carerra GT and McLaren’s F1 and SLR that are doing the changing. One of the problems they face is dispelling the myth that carbon fibre (CF) as something only viable for the enormously expensive end of the market where cost is not necessarily a prime factor for the consumer.

Martin O’Connor, a former Managing Director of McLaren Composites, and current head of acmautomotive, is one person trying to alter this widely-held perception. “Few people take in to account that super cars rely on hand lay-up processes. People talk about the high price of carbon, but when you analyse actual costs, it is the manufacturing process as much as the price of the material that is responsible for costs. When you are building a super car and looking for batches of 20 or 30-off, you have to rely on hand-laminated parts cured in an autoclave. It isn’t that you are uncaring of cost – when investigating the manufacturing of the Mercedes SLR McLaren we were very conscious of keeping costs down, but for this quantity of cars there is no other process available. Carbon is the ultimate material, so you have to use it – and in these volumes, the CF parts have to be laminated by hand, which makes it expensive.

The association isn’t helpful to the business of selling carbon fibre parts into the wider automotive community.” O’Connor is now a consultant to materials group Toray of Japan and heads up the company acmautomotive, which is developing the supply of CF prop-shafts to European OEMs. Toray has been active in supplying CF parts in Japan for many years. Significantly, the bulk of its business is not in the supply of the body panels for which this material is perhaps best known, and is not dedicated to the high-end sector. Its business is prop-shafts, about 700,000 of them.

In addition to Nissan Skylines, Toray supplies Mazda with parts for its small sports cars and Mitsubishi for the fourwheel drive Pajero. In Europe, Toray also supplies Aston Martin with prop-shafts. 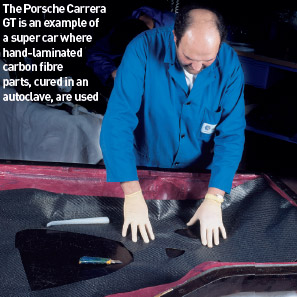 Most enterprises simply aren’t willing to fund the R&D and start-up costs for a carbon fibre component manufacturing operation, which means much of that work falls to the materials supplier. Toray typically makes its prop-shafts on large filament winding machines for applications worldwide.

The company has also developed a system of fixing the joints into the ends of prop-shafts without glue. It’s a quick, very production-orientated solution . This is not the type of thing that an OEM, particularly a low-volume one, would get involved in, but it is an area in which interest is increasing.

Whereas making a body panel from CF has inherent difficulties linked to providing a suitable Class A surface finish, structural and semi-structural are not affected by the same restrictions. This has made the material attractive to the burgeoning niche market for performance variants.

“The interesting markets for me,” says O’Connor, “are the 10,000 to 15,000 specials that support a usual range of cars. These are normally sold at a premium and in many instances, are the precursor to inclusion of new technologies in mainstream programmes. Ideally, we would like to get in the 20,000 to 30,000 bracket, as the quantity easily justifies high-quality tooling. A number of technical issues have to be resolved, the main one being the manufacture of preforms. Traditionally woven fabrics have been used as the base for preforms, but when cutting any shape from a roll of material for any high volume application, the wastage levels are unacceptable.

“The way forward is in the development of processes in which preforms can be manufactured quickly and consistently using a bobbin of material as the basis.

It is essential to the growth of the CF applications. As for very high volume applications such as the Golf and C-Class market, I would like to be able to supply a dash beam or door inners but I think it will be a few years before this is the case. It is a market where a technology and the use of clever composites can become accepted as a mainstream offering,” O’Connor tells AMS.

Production processes must be developed

“I know of a number of companies that are looking for suitable manufacturing processes for a range of CF parts and discussions are progressing well. My view is that compression – and RTM – are really the only options open to us. There are several companies in Germany producing fairly high volume, small parts in carbon fibre but we need to further develop these production processes so that we can get above the 10,000 off with the aim of reaching a target market of around 30,000-off mark. There are people who think we will reach 100,000-off per year production levels with FRP sometime soon and this may be possible, for a simple, small component. It is immensely difficult to do for a shaped component such as a dash beam or door inner.

Whatever they may say, I don’t think the industry is going to reach that figure in the near future – CF might not reach it at all in its raw form, but I see a significant potential in RTM components using CF ‘hybrids’ to achieve future crash and legislative requirements,” O’Connor contends.

While prop-shafts are certainly an emerging market, other areas of the car are proving an increasing challenge for the OEMs. As cars become more complex and include numerous accessories and more ‘seats’ the OEMs have to find a way of reducing weight of the car structure to to decrease the carbon footprint, while not compromising the ability to protect passengers and pedestrians.

With these increasingly difficult demands, OEMs have little choice other than to make greater use use of ‘clever composites’ (CF hybrids).

Steel and aluminium, while having a significant place in the manufacture of car structures, will not, in a number of instances, be able to provide the characteristics necessary for future legislation. Typically, components such as door inners, while needing to provide support for the door closures, must also provide side impact capability, and while you can introduce more steel in the part, there is a point at which the fitting of power rams to open the door due to its heaviness, will not be not be acceptable. ‘Composites hybrids’ will be the only way forward, O’Connor says.

“A dash beam is another example. It has to be very stiff because there are loads going through the steering column as well as reverse loads when the airbags go off,” he explains. 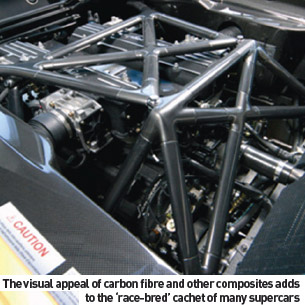 “The dash beam has to be structural and an integral part to the chassis. Most applications use steel, but with carbon there can give a weight saving of up to 75 per cent. Interestingly, the beam doesn’t need to be uniformly rigid in every direction as its shape provides part of the stiffness.

However, where an area needs localised strengthening, the carbon fibre manufacturer simply adds extra laminates. With steel it tends to be a monolithic piece of metal,” he adds.

The capability of CF to strengthen an area or improve a local characteristic with an additional ‘different’ material , will be a significant advantage for composites in the future.

“The way I see the industry going is similar to the Formula 1 route with increased use of hybrid composite materials that provide far more efficient and clever structural capability than traditional materials. This, combined with the improved preform technologies, and increased recycling ability, will be a winning combination. It’s the sort of technology that makes the future for automotive composites very exciting to be involved with,” O’Connor concludes.