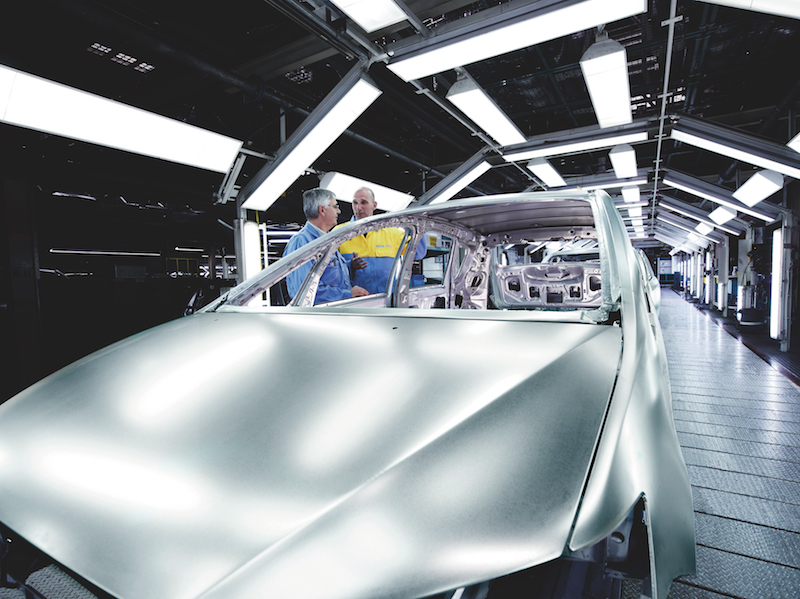 In 2017, global sales of battery electric vehicles (BEVs) and plug-in hybrid electric vehicles (PHEVs) reached 1.3m units, according to Frédéric Painchault, head of Global Automotive Marketing at steelmaker ArcelorMittal. “This represents a low share of total vehicles sales – less than 2%. However, the market is growing quickly, by over 57% compared with 2016. Global automakers are reportedly planning to launch approximately 340 BEV and PHEV models over the next three years. This means sales should reach almost 5m units in 2020”.

Environmental legislation is the primary motive for the automotive industry to move towards electric powertrains. The EU, for example, has mandated that new cars can emit no more than 130g of carbon dioxide per kilometre travelled. This target will be lowered to 95g per kilometre in 2021, phased in from 2020, and is likely to get even more stringent in 2030.

The level of take-up of electric drivetrains varies from region to region. Berkhout says that the single biggest influence remains the Chinese market, where the government has set mandatory EV production quotas for OEMs operating there to reduce tailpipe emissions. With China being the single largest profit market for most OEMs, the risk of ignoring this is far too great. Another pressure is improving air quality targets cities. The tightening of tailpipe emissions in the EU has also now been brought into sharper focus following the fallout from the diesel scandal and the pending shift later this year to the new WLTP emissions test.

Painchault adds: “Uncertainty on Corporate Average Fuel Economy [CAFÉ] regulations in the US may mean that growth in the NAFTA region is not as high. In Europe and China, ArcelorMittal is forecasting that the combined number of BEV and PHEV sales will exceed internal combustion engine [ICE] sales by around 2025. Most of the growth will come from PHEVs. Our scenario for 2030 is that each type of vehicle – PHEV, BEV and ICE – will account for one-third of sales. Within fifteen to twenty years, non-ICE vehicles should dominate the market.”

Gaining a place in the electric future

The steel industry is typically bullish about its place in the electric future. For instance, in a recent report, Tata Steels says that increasing demand for ultra-low emission vehicles (ULEV) will drive growth in steel supply to the automotive industry by 4.2m tonnes in Europe alone.

In recent years innovation, not to mention profits, in the automotive materials industry have been driven primarily by the need for lighter and/or stronger products that allow carmakers to reduce the mass of their ICE vehicles – thereby lowering their fuel consumption and carbon dioxide emissions. In early EVs too, such as BMW’s i3 or Tesla’s Model S, lightweight materials have been key (carbon fibre-reinforced plastic (CFRP) and aluminium, respectively).

With ICE vehicles, consumers are used to being able to drive several hundreds of kilometres before they have to re-fuel. To achieve a comparable range from a single charge of a BEV, a very large, expensive and heavy battery has had to be used, meaning that carmakers have had to cut weight elsewhere in the vehicle. Will this always be the case?

The president of automotive at NanoSteel, Craig Parsons, says: “Yes, it is likely that electric vehicles have more incentive to lightweight than ICE vehicles. A battery always has a finite amount of power storage, and therefore range, and reducing weight equals a direct increase in total vehicle range, which is the largest design hurdle faced by EVs. Batteries are very heavy and every pound saved in the vehicle will either make more room for a longer life battery, and/or a less powerful battery for the vehicle to travel a given distance.”

‎Business development manager for Automotive SSAB, Jonas Adolfsson, concurs. He says that regardless of the powertrain employed, the physics involved in a vehicle’s movement remain the same. The resisting forces to motion are acceleration, rolling resistance, gradient and wind resistance. All but the latter are strongly influenced by the weight of the vehicle. He says: “Batteries have much worse energy density [Watt-hours per kilogramme] compared with gasoline or diesel powerplants, so I would say that lightweighting would be even more important.”

“Reducing mass has a limited impact on extending range. For example, a 100kg reduction in mass only increases range by between six and 11 kilometres…” – Jean-Luc Thirion, ArcelorMittal

Jean-Luc Thirion, the head of Global Research and Development for Automotive at ArcelorMittal, has a different opinion: “Reducing mass has a limited impact on extending range. For example, a 100kg reduction in mass only increases range by between six and 11 kilometres. To extend range it is much easier and less expensive to add more batteries. The impact of weight saving on top speed and acceleration is also negligible. A 100kg mass saving increases top speed by less than one kilometre per hour and reduces acceleration time by less than half a second.”

Berkhout agrees: “All vehicles should be as light and cost effective as possible, but with current technology, hybrid and full electric powered vehicles are 20-30% heavier. A lighter vehicle will extend the range of a hybrid or full electric vehicle can achieve, but at higher costs. Will a vehicle manufacturer pay significantly more for the additional lightweighting for only a small increase in range?”

He uses the latest VW Golf as an example. The hatchback is available in petrol, diesel, hybrid and full electric variants, with the petrol kerb weight being 1206kg, the diesel being 1301kg, the hybrid being 1615kg and the electric being 1615kg. The electric variant has a range of 300km. If 10kg of weight was cut from the body-in-white (BIW) it would only amount to a 0.62% weight saving, which would increase the range of the vehicle by just 10km.

Energy recuperation technologies already exist in BEVs, which help to extend their range. Further, future developments in infrastructure must also be considered. A BEV could be fast-charging overnight at its driver’s home, could trickle charge wirelessly during a commute, and then automatically charge while parked at the workplace. In this scenario a heavy and expensive battery pack capable of storing enough energy for a 300km journey without the need for recharging is redundant.

Should all of this be proved correct, then the steel industry has an ideal opportunity to re-assert its dominance in the automotive materials market. The electrification of drivetrains could create a host of new applications for strong and formable steels in the body structure of these vehicles

For example, Berkhout hypothesises that if the ICE is no longer packaged at the front of the vehicle together with the radiators and such, and the position of the front wheels is not dictated by the engine position, then the length of the front-end can get shorter. If the front-end is shorter, then the length of crash structure is shorter, but it must absorb the same amount of energy in a frontal impact. This could require the use of a larger section of front rail, made from a higher grade of steel, and the surrounding BIW structure holding the front rail will also have to manage higher loads.

He continues: “With the battery packs mounted under the floor, the side impact load will also need to be managed differently. Today in ICE vehicles we have a sill or rocker reinforcements supported by the seat cross members; these support the B-Pillar during impact. If the battery is positioned in the vehicle where the seat cross-members usually are, then the battery tray must be able to withstand side impact load. The Opel Ampere battery unit weighs over 400kg, and 70kg of this is structural battery tray. This also leads to changes to the rocker panels for supporting the battery tray and absorbing more load.”

Head of the Application Technology department at ThyssenKrupp, Lutz Keßler, agrees that the battery tray is an ideal place to target with high-strength steels. He says: “The battery is the heart of an electric car and the most sensitive and expensive component, accounting for 30 to 50% of total vehicle costs. So, it’s all the more important to develop solutions to protect the battery that do not drive the costs for EVs even higher.”

Thirion adds: “Some products for hot stamping available today, such as [ArcelorMittal’s] Usibor 2000, can now reach a tensile strength of 2000MPa. Two decades ago, the maximum strength was only 340MPa, so this is a spectacular increase. Martensitic grades for roll forming and ArcelorMittal’s Fortiform range – the third generation of cold-stamped advanced high strength steels [AHSS] – also have very high strengths. These steels allow vehicle designers to protect the cockpit and battery pack in an optimal way.”

Indeed, Tata predicts that European demand for advanced steels for the structure of these vehicles will increase by approximately 2.6m tonnes by 2050, as manufacturers look to save weight in cost-effective ways.

Another key growth area for steel will be in the powertrains used in ULEVs, including the electric motors and battery cells. Expected by Tata to account for a 1.6m tonne increase in European demand for steel by 2050, these components will use greater levels of electrical and plated steels, respectively. 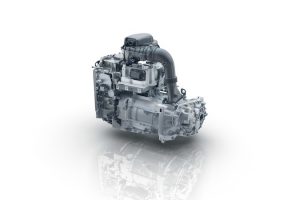 Meanwhile, lithium-ion batteries – the energy storage solution currently favoured by most carmakers – are manufactured in three different battery cell formats: cylindrical; prismatic; and pouch. Prismatic and pouch formats are generally packaged in a non-ferrous casing, whereas cylindrical cells are packaged within a nickel-coated ‘can’ and are likely to be the most common, especially in the immediate future, as they offer cheap energy storage, are reliable, relatively easy to manufacture and possess good mechanical stability. These are a good candidate for manufacture with electrical steels.

Steel producers predict that aluminium and CFRP will have a relatively low impact in these vehicles for several reasons.

Firstly, they will remain prohibitively expensive. Secondly, they argue, steel demonstrates better mechanical properties – steel is stiffer than aluminium, has a much higher fatigue strength and is easier to form, join and paint over other materials.

Keßler says: “Despite the excellent property profile that steel offers, competition between materials will remain challenging. So, steel manufacturers must also continuously seek new and better solutions. At ThyssenKrupp, for example, we are working to close the gap between hot and cold forming by highlighting opportunities for cold forming offered by new ultrahigh-strength dual-phase steels in the 1200 class. We have also recently developed a technology that – for ultra-high-strength steels in particular – eliminates spring-back in the press plant, reduces material usage and ensures greater process reliability.”

Finally, it can be argued that aluminium and CFRP are less sustainable than steel when looking at the full lifecycle, which could be a major, future driver in automotive. Thirion says: “Life-cycle assessment (LCA) looks at total emissions generated during the three stages of a vehicle’s life: production; drive phase; and recycling. Studies show that aluminium emits four-to-five times more greenhouse gases (GHGs) than steel over the full life cycle of a vehicle.”