To break new ground takes courage, but heavy-vehicle maker MAN was confident that the process would go smoothly because the design and construction of its new facility was initially done using virtual software

Heavy-vehicle maker MAN Nutzfahrzeuge’s newest truck assembly plant in Niepolomice near Krakow, Poland started life as a virtual design. The facility was designed and constructed in DELMIA Process Engineer. But this proved a useful exercise as by mid-2007, production of trucks had started at the plant.

The plant has the capacity to build 15,000 trucks annually. A gleaming new 81,000m2 structure was erected on a 142-hectare industrial site, with 65,000m2 set aside for the assembly hall. It is anticipated that 650 new jobs will be created by 2009. When it decided to build the new assembly plant, MAN took the opportunity to create a production facility that implements the best practices of the group for assembly processes, logistics, resource planning, and technologies. Planners took cues from other vehicle makers by making detailed observations of their facilities. “We think that Europe’s most modern assembly plant is here in Niepolomice,” explains Thorsten Franz. With a background in engineering and a specialty in production planning, Franz will manage final assembly at the plant. High goals were set and to achieve these, previously optimised production processes required further scrutiny in DELMIA. As Alexander von Klein, key account manager at DELMIA says: “To break new ground takes courage.” 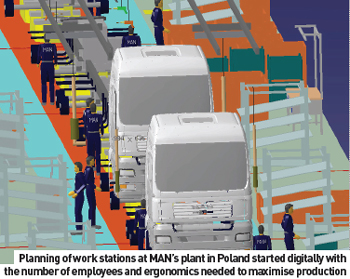 Close collaboration leads to optimisation
A team of planners from MAN joined DELMIA software specialists to develop plans and through close collaboration, ensured that the software-based methods could be adapted to the truck maker’s standards and be put to optimal use. Three standards underlie production planning with DELMIA Process Engineer: product (components, component assembly), processes (manufacturing and logistics processes,) and resources (manufacturing resources, equipment and machines, logistics elements, layout). Data sets were correlated before being networked and visualised in 3D. Building on this, the team developed production designs, a manufacturing system layout, materials handling and transportation systems planning, scheduling and work shift models, and even the layout of individual work stations. An initial draft plan was honed to encompass the finest details. This means if a detail changes, the effects can be seen on the entire system.

The new plant will build TGA Worldwide trucks – a model specially designed to meet the requirements of East European markets. The plant is also expected to assemble MAN’s entire heavy-vehicle series, including two-axle, threeaxle, and four-axle trucks ranging from 5.5 to 12 metres in length, production scheduling requiring a high degree of model variation. On top of this, engineers targeted lean production, with the lowest possible use of warehouse space and a high proportion of just-in-time supplies. Initially, the MAN truck assembly plants in Munich and Salzgitter served as role models for planning. Thorsten Franz explains: “We had to scrutinise those structures critically, to determine which ones were appropriate for us. We asked which product we wanted to build in Krakow, how many work cycles we needed to assemble this product and how many employees were required to work in each cycle, and the necessary supply volumes. To answer these, the DELMIA Process Engineer system proved invaluable.”

An initial plan of the new plant was prepared using different assembly lines, complete with line balancing on the various stations, such as framework construction, painting systems, wheel, cab, and motor assembly. At first, these plans resulted in a facility that covered a relatively large area with long process routes. “With DELMIA Process Engineer, we had an excellent chance to play out various scenarios; which model mix do we need for how many work cycles and how many employees?” Franz tells AMS.

Visualisation tests improved logistics at the plant
Alternate manufacturing designs, manufacturing systems layout, materials handling, tests for usability and the supply concept, along with line balancing and cycle periods were all placed in context, then visualised and optimised. The workstations, component data, employees, supplier parts containers, and the trucks to be assembled were transformed into 3D models. In so doing, the plans became substantially more transparent. Among other benefits, these tests resulted in significantly improved logistics at MAN’s Krakow plant.

By way of illustrating the assembly process involved, a truck consists of approximately 6,500 parts delivered in containers, all of which must be available at the right time in the right place. Visualisation revealed how original plans would have led to the concentration of materials at certain locations, and rendered otherwise feasible work processes impossible. 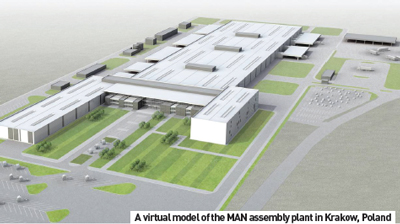 “Without a doubt, we had too much material at the assembly line,” explains Franz. “This would have thrown a spanner in the works at production start-up. This is why we initiated more sequencing and installed pre-assembly zones that reduce the volume of parts that are delivered directly to the assembly line. I believe we were able to minimise costs and problems through simulation.” He envisages a future that incorporates design-forassembly of individual components. “We have already achieved significant synergies from the collaboration between the logistics, technology and assembly divisions, and achieved considerable cost savings. However, we’re still a long way from exhausting all possibilities and we will continue to review them.”

Future planning in 3D
V5 software technology, which is already in use in production development and engineering at MAN through CATIA, is also available to production planning through DELMIA. The advantage to MAN is that, as the number of parts changes, or when a new truck model is being constructed, the virtual part can be examined while it is still in the engineering phase. It can be interrogated for its adaptability for assembly, its manoeuverability on the assembly line and its effects on ergonomic aspects. This means that the future of engineering is gradually converging with that of manufacturing.