The ability to pierce metal plate is a necessity for many fabricators and steel processing centres. Using plasma, rather than oxyfuel, is most desirable, yet despite plasma’s many benefits, some companies find piercing thicker material - anything over 1¼” - difficult with plasma. Several factors often leave operators with a torch filled with melted consumables, or consumables covered in a layer of dross. Thanks to recent improvements in plasma torch and consumable design, the piercing capabilities of plasma are now significantly improved. This article looks at factors that have traditionally impacted piercing, as well as the technological advances that are making plasma the cutting technique of choice when it comes to piercing thicker material.

The piercing process
When piercing with a plasma torch, the plasma arc attaches to the top surface of the plate and transfers enough energy to melt the metal near the top. This molten material must then be removed, usually accomplished with the non-current carrying cold gas and the plasma shielding gas. As this molten material is removed, the arc transfers the energy to the bottom of the pierce hole and melts deeper into the plate. This process continues as the arc penetrates deeper into the plate until pierces the material.

Physics of limitation
In theory this is perfectly acceptable, however as piercing takes place and the hole becomes deeper, three limiting factors begin to impact the process.

The first is associated with the energy transfer to the bottom of the hole. This is reduced as the hole becomes deeper and the arc transfers its energy not only to the bottom of the hole but to the sides as well, enlarging the hole near the top of the plate and slowing the rate of pierce progression. As the hole becomes deeper and wider, the distance between the torch and the workpiece lengthens, increasing the arc voltage and the chances of the arc going out. Even if the power supply has enough voltage to maintain the arc, the longer pierce times mean the torch is kept over the hot molten steel for a longer period of time, which begins to melt the consumables, particularly the shield. The second limiting factor is associated with the fluid dynamics of removing the molten material from the hole. Cold plasma gas and shield gas are supposed to blow the molten slag out of the hole and away from the pierce. However, as the hole becomes deeper, this becomes more difficult. As a result, gas flow tends to puddle at the bottom. The third and most impactful factor limiting piercing of thick metals is the effect of the molten material exiting the pierce hole, with much of it solidifying on the end of the torch. As the torch sits directly over the metal being pierced, heat and molten metal travel back to the torch. As the temperature of the torch—particularly the shield— increases, molten material more readily adheres to it. This transfers even greater levels of heat into the shield, creating a continuously increasing condition of slag adhesion and heat buildup. This progressive buildup of slag can block vent holes, block the main orifice and affect the torch’s initial height sensing; all of which negatively impact pierce capability and cut quality. Eventually, the shield and even the nozzle can melt. 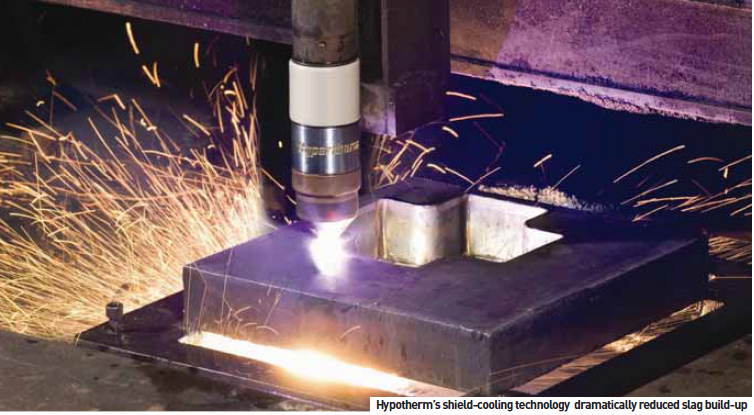 Further to this, any molten metal that doesn’t end up on the torch often settles on top of the plate. This significant puddle, which usually forms on the top surface of the plate around the edge of the pierce hole, can cover a large area and be quite thick. If the torch runs through this slag after it has begun to solidify, damage will occur to the tip of the torch (usually the shield). Using a torch lifter with voltage control provides the ability to raise the torch over this puddle and prevent physical contact, but the action of raising the torch during the cut can cause striations in the cut edge as it passes through the slag puddle. The best solution to this problem is to provide a sufficiently long lead-in to the cut, preventing the torch path from crossing the slag puddle. As a general rule of thumb, a lead in equal to the material thickness being cut is usually recommended.

Addressing the limitations of plasma piercing
The first limitation to piercing thick metal plate or the energy transfer to the bottom of the hole is primarily addressed through the HPR XD architecture. The second limitation to piercing thick metal plate with regards to the removal of molten material from the hole, can be addressed through various piercing techniques. Stationary piercing, low transfer / stretch arc piercing, moving and double piercing techniques can all help the removal process.

The third and most important factor limiting the use of plasma to pierce thick metal is primarily associated with the molten metal that gets blown onto the torch and consumables, especially the shield. There really is no way to keep molten metal from hitting the torch. However, engineers at Hypertherm, a world in plasma cutting technology, have discovered it is possible to reduce the metal’s tendency to stick to the shield by lowering the shield’s temperature. Experimenting with different cooling methods, the solution was to aim coolant at the part of the shield exposed to the most molten metal. In order to do this, the engineers decided to employ a closed loop cooling system which has direct contact with the flange on the back side of the shield.

During testing, the Hypertherm engineering team used water as a coolant, controlling its temperature with a chiller/ heater. During laboratory testing, engineers settled upon three different temperatures: 38°F, 85°F, and 135°F, with the test conducted using 1 ½” mild steel plate with Hypertherm’s newest system, its HyPerformance HPR400XD. Using the 400 Amp oxygen system to make 300 pierces. Hypertherm weighed the shield and the shield cap prior to the start of the test and after every 25 pierces to monitor the accumulated slag on the shield. This was done until the 300 pierces had been completed. 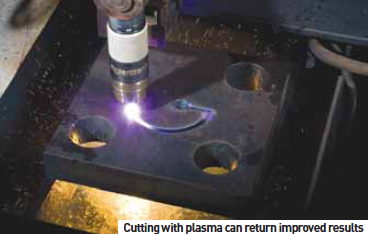 The results of the test were dramatic. When the shield temperature was maintained (via the coolant) at 135°F, the sum of the accumulated slag through the duration of the test was 198 grams. At 85°F, the team saw a small but significant drop, with accumulation measuring 175 grams after the 300 pierces. The big change came when the shield temperature was dropped to 38°F. At that point, only 31 grams of slag was measured.

By incorporating this technology - dubbed PowerPierce by Hypertherm - into plasma torch and consumable design, the piercing capabilities of plasma are significantly extended. Hypertherm estimates it is now possible to productionpierce mild steel up to 2” thick, opening up the benefits of plasma cutting to additional companies. In addition, specialized techniques can improve consumable life even further, since a cooler shield also prevents issues with melting.

Advances such as this look set to benefit companies that can now use plasma, instead of slower or more expensive methods, to expand the work they are able to complete.