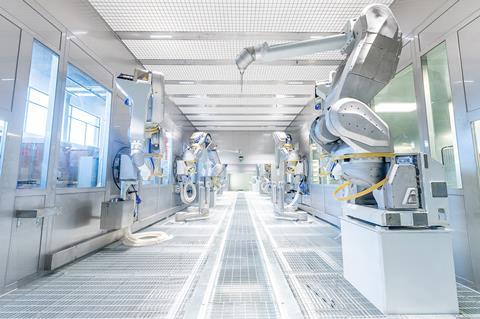 Electric cars are manufactured using state-of-the-art technology at the new electric vehicle plant of the Chongqing Sokon Industry Group. It is a first for Dürr as it brings the extremely mobile, seven-axis painting robot EcoRP E043i from its new generation of robots to China. It can paint different sized bodies of the fully electric SUVs flexibly and without the previously required displacement rail. The complete paintshop, with Dürr as the general contractor, also includes an Ecopure air purification system with heat recovery. The new plant therefore also sets standards when it comes to air pollution control.

Sokon is dynamically promoting the development of electric mobility at its new plant in Chongqing. The production technology itself is also pioneering; it is the first time that a third-generation painting robot from Dürr is used in a Chinese car factory. The EcoRP E043i has seven rotary axes, making it much more mobile than previous painting robots with six axes. The additional joint extends the robot’s working area and, as a result, it reaches even hard-to-access areas with ease when painting the interiors of the bodies.

Up to now, painting robots often moved on horizontal rails, but the EcoRP E043i no longer needs these thanks to the high mobility of its seven-axis kinematics. This greatly reduces the investment and maintenance costs in the spray booth and also enables a better view of the booths.

In total, 60 Ecopaint robots from the latest generation are being used in the primer, top coat, and clear coat lines for interior and exterior painting at Sokon. As well as the 36 EcoRP E043i painting robots, 16 SCARA door openers and the six-axis models as a hood opener were sent to China. In addition, Dürr supplied the robots and application technology for the sealing stations. The seam sealing and insulation materials is applied to the bodies by 20 robots from the EcoRSi series.

Dürr’s third generation of robots is modular in structure. This means that the EcoRP E/L033i and EcoRP E/L133i models with their six-axis kinematics can be used for both painting and opening the hoods. The modular concept has been applied throughout the six-axis and seven-axis kinematics. The only difference between the variants is the additional axis of rotation in the main arm. The otherwise universally identical components simplify spare parts management, save storage costs and make maintenance work easier. The control technology of the robots for applying paint and high-viscosity material is also universal. The modular design of the control cabinets enables the optimal configuration for the respective application process of a painting or sealing station.

DXQ3D.onsite is a universal software package for programming, simulating, and optimising Dürr’s painting and sealing robots. In addition, all relevant process data can be parameterised. The software supports the new generation of robot controllers and is compatible with the previous version. It can be connected online to multiple robot controllers directly via the network. As a result, changes to teach programs and process data can be transferred to the production process in the shortest possible time.

The new coating and sealing robots are prepared for the intelligent factory of the future. Sensors detect temperature, operating hours and the degree of wear on the components. The newly developed EcoRCMP2 process and motion controller transfers the information to the higher-level maintenance and control system. Thanks to this technology, the data from multiple spray booths or even complete paintshops can be combined and evaluated.

Further milestones towards the digitisation of the plant are reached with the MES software for production control developed by Dürr. Monitoring, tracking and individually configurable reporting are important elements in efficient process control and optimisation. This solution is the basis for further advances in the area of Industry 4.0.

The mechanical and plant engineering company Dürr has constructed the entire paintshop for Sokon and, as general contractor, is also responsible for the construction of the building and for three high-bay warehouses. These high-bay warehouses mean that various surface storage is not needed. This simplifies the building structure, saves space, and enables intelligent material flow control, making it a key part of Dürr’s Eco+Layout.

Among other things, the technical scope of services includes the RoDip rotational dip process in pre-treatment and electrocoating all robots and applications for the sealing and painting processes, and the EcoDryScrubber dry separation system. This binds the paint overspray in a process involving no water or chemicals and can therefore be operated with up to 90% recirculated air. The result is an energy saving of up to 60% in the spray booth.

When it comes to emission protection, Sokon meets all legal requirements and also realises maximum energy efficiency. The large volume of solvent emissions from the application zones are purified by a combination of the adsorptive process of the Ecopure CRC VOC concentration system and the Ecopure RTO regenerative thermal oxidation system. The gaseous pollutants in the exhaust air from the booth first undergo adsorptive concentration before being disposed of in the downstream oxidation system with minimal energy consumption.

The latest generation of the Ecopure TAR recuperative thermal air purification system is used to purify the hot exhaust air flows from the various paint drying processes. This process purifies the exhaust air and, at the same time, makes all the heat available for heating the oven.

The Dürr Group is one of the world’s leading mechanical and plant engineering firms with extensive automation expertise. Its products, systems and services enable highly efficient manufacturing processes in industries including automotive, mechanical engineering, chemical, pharmaceutical and woodworking. The company has 108 business locations in 32 countries and generated sales of €3.87 billion in 2017. Dürr has around 16,400 employees and operates in the market with five divisions.

The Dürr Group has had a direct representation in China since 1985 and currently employs around 2,000 staff there. Dürr Paintshop Systems Engineering (Shanghai) Corp. Ltd. plans and builds paint and final assembly systems as well as exhaust-air purification systems. Its portfolio also includes energy efficiency technology.