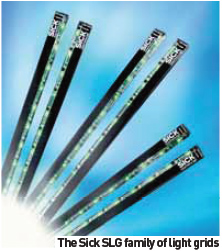 Sick has announced the launch of its new ´SLG´ family of non-safety, through-beam light grids. The SLG is said to be the slimmest light grid available, using 8mm for the optics. As such, the SLG can be hidden inside machines, frames and doors. In addition to its small size and simple confi guration interface, the SLG reportedly offers the lowest-cost solution for detecting objects as they move through an area. The SLG family is organized into three groups: SGS, for doors and gates; SAS, for smaller machines; and SPL, for pick-to-light applications. The complete range features one-touch setup that does not require a PC. With the cross beam function enabled, SLG sensors can detect objects within a resolution of 25mm. Typical applications include pallet overhang detection on conveyer belts, door and gate access control and part ejection detection. www.sickusa.com