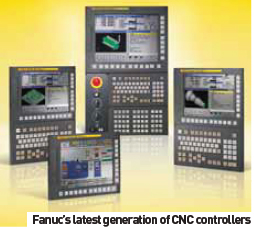 Fanuc has released a selection of new CNC process controllers, Model A, B, C and D.

For example, the new Fanuc CNC Series 30i, 31i, 32i Model B Series controllers are ideal for sophisticated and complex machine tools. Features include a large number of axes and multichannel capability. Compared to previous models, the B Series models feature significant advances, numerous detail improvements and additional functions for punch presses and laser cutting machines.

Additionally, the Fanuc CNC Series 35i MODEL B is based on the technology of the 30i-B Series and has been developed primarily for transfer line and handling applications.