Motor starters with Profienergy interface save energy in production 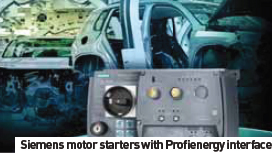 Siemens Industry Automation & Drive Technologies has added the Sirius M200D motor starter to its series of Profi energy-compatible products. Using the multi-vendor, deviceindependent Profi energy profile, which has been standardised according to the Profi bus User Organization (PNO), it is now possible to shut down individual machines or even entire production sections from a central control system, via Profi net communication.

During breaks in production, loads are co-ordinately shut down from a central control system while other automation components remain in operation, for example for safetyrelated operations. At the end of the break, the loads are co-ordinately switched on again. The M200D units come with direct or reversing starters, with both mechanical and electronic switching up to 5.5kW.