The process of welding the tailgate on the Corsa at Opel Eisenach has been overhauled without any compromise to safety, with automation expert Pilz

Like most body shops the one at Opel Eisenach is heavily automated, almost a 100 per cent in fact, save for eight workstations on the body assembly line. And when Opel decided to reconfigure them it did so with the objective of making them more ergonomic and economical, and increasing productivity.

The automation had to be simple to use, offer maximum diagnostic capability and have a modular design that brought a high level of flexibility to the planned extension of the production facility.

These criteria also went for the safety-related automation components, which is where Pilz came in with its multifunctional safety system PNOZmulti.

Among the Opel models assembled at Eisenach is the three and five-door Corsa. The vehicle’s tailgate is built in the body shop’s first production zone, where up to eight workers attach the doors to the body with the help of welding jigs. Once the doors have been assembled, the wings and engine bonnet are added to the vehicle body before it is transported to the finish line.

Before the production zone for manual door welding was redesigned, two interconnected pairs of light-beam devices monitored the left- and right-hand sides of the production line. The self-resetting five-beam and one-light beam devices were positioned 30cm horizontally and vertically above the floor and monitored the danger zone along its whole length.

The body could only move to the next production zone if all eight workers had left the danger zone and had signalled that the conveyor could start by pressing the enable buttons. Ultimately, the slowest worker determined the pace and therefore the productivity of the whole production zone. Thus the fact that four workstations to the left and right of the production line were “linked” to only two safety sensors was a problem that needed changing. 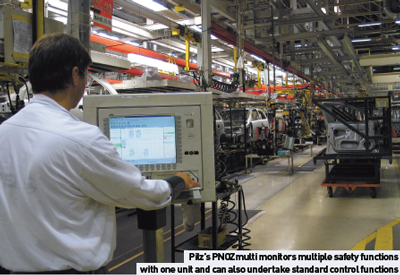 As a first step in the reconfiguration, the production zone was extended by two buffer zones. These spaces were set up after the first and before the last manual station, giving workers time to react to the variations that occur in finishing the work stages.

As a result of splitting the workstations it became necessary to separate the safety sensors in order to achieve a clear increase in productivity.

Four light beam devices were replaced by ten people scanners, with one scanner assigned to each workstation with a welding jig. Two scanners were also assembled in the final manual station area where residual welding work is completed if necessary.

Opel engineers decided on Pilz’s PNOZmulti system to monitor the ten scanners, plus the E-stop grab wires for the conveyor system.

This modular safety system monitors multiple safety functions with one unit and can also undertake standard control functions. Plus, safety functions are no longer implemented through the wiring but are easy to configure using a configuration tool on the PC.

“Eplan macros were available right at the start of the planning phase. This was a great help to us during planning and design,” said Bernd Köllner, Project Engineer at Hörmann, the German door maker supplying Eisenach.

One PNOZmulti-base unit replaced multiple individual safety relays, which would have been costly and timeconsuming to wire together.

The functions provided by the safety system were tailored exactly to suit the application: 44 inputs, four semiconductor outputs and 26 relay outputs with a maximum 6A load, all of which could be configured via the software. The safety system was easy to configure which meant the upgrade of the production zone was completed in just four days. 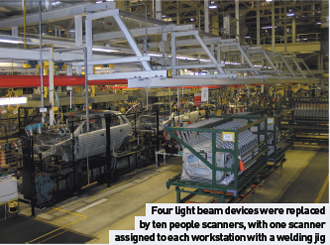 Production efficiency and uptime is directly related to the diagnostic capabilities of the automation components within the application. Safety related automation solutions that don’t provide diagnostics on a fully-integrated basis are no longer acceptable to users long term.

What Pilz ultimately equipped the safety engineers at Opel Eisenach with is a redundant, micro processorbased safety system that provides the whole range of communication channels — including all the common fieldbus systems. For Eisenach engineers, it is easy to transmit data to the process control PLC, including input/output status or run/stop operating conditions. Not only are communication modules available – in Eisenach’s case, to connect to Profibus DP – but 24 virtual outputs can also be activated.

“The fact that Pilz also provides the necessary GSD files simplifies the process enormously,” says Frank Seiferth, Managing Director of SEITEC, which provided the software for the project.

With the help of a COM-Server, a Serial/Ethernet converter, the system can also feed all internally generated information into an Ethernet-TCP/IP network or area network. 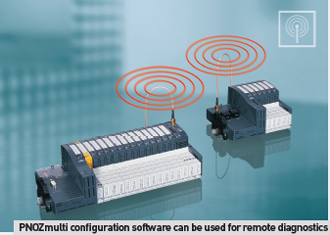 Operators at the Eisenach plant are now able to perform online diagnostics and view help texts from any PC containing the pre-installed PNOZmulti service tool software. These remote diagnostics, together with detailed, descriptive diagnostic messages in the form of a dynamic program display, help to reduce plant downtime significantly. Maintenance personnel don’t even have to attend the affected production zone; they can access an area network PC, which may even be remote from the production process, to obtain information about the cause of a problem and take targeted action.

The system can not be accidentally reconfigured according to Pilz. The PNOZmulti service tool is a reduced version of the PNOZmulti configuration software – it does not contain the extensive editing functions – and as such it can confidently be used for remote diagnostics.

All requirements were met with total success, including the productivity increase. The plant has now been operating for more than six months without problem and production managers are delighted with the considerable increase in productivity and subsequent rise in output.

Sure it’s a reliable way of distinguishing between a pallet loaded with work pieces, and an operator’s torso entering a potentially dangerous work cell. And, of course, the technology gets full marks for detecting and evaluating timing and logical sequences of muting signals triggered by passing objects – turning dangerous machinery off if it doesn’t recognise a sequence signature.

But what about muting’s significant system-related expenses? The muting sensors, the muting indicator lamps, and sometimes the swing doors with end-switches that can result in high installation costs? Not to mention the higher maintenance costs and the risk of unintended misalignment, as well as operators’ deliberate outwitting of the system in an effort to avoid lockout procedures when entering a cell? 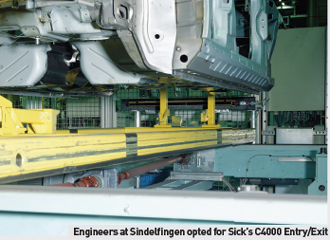 Safety planners at Daimler’s Sindelfingen plant carefully weighed muting’s pros and cons before deciding on a wholly new way of thinking about light-curtain safety – pattern recognition. Like any auto plant, the facility has a range of robots, turntables, palletisers and insertion equipment integrated into its automated material fl ow concepts. Objects such as loaded pallets, workpieces, containers and car shells on a transport belt are transported in and out of work cells. At the same time, plant staff must be protected from potential hazards.

With this in mind, engineers opted for Sick’s C4000 Entry/Exit and the new monitoring philosophy of pattern recognition. The new light curtain is used for protecting access to a car shell transport system. Daimler safety engineers programmed the system with the edge parameters of the skids, the maximum permissible size and the maximum number of skids. It works like this: when a skid enters the area, the light curtain detects the pattern of the spar frame which may then not be changed again – until the next skid arrives. The system differentiates a spar frame from a person by the dynamics of its movement – persons that enter the protective field cannot “imitate” the pattern of the spar frame. If the pattern or one of the switching criteria changes for the light curtain, a person is detected and the hazardous machine movement is switched off, regardless of the direction of transport.

Pattern recognition solutions are also available for general handling and warehousing systems with Sick’s C4000 Palletiser. Depending on the application, two different pattern recognition approaches can be taken. The C4000 Palletiser Standard allows the size and closed form of an object to be defi ned and detected. In this case, the interruption of individual light beams and the minimum/ maximum size of the object is monitored and evaluated.

Programming is unnecessary because pattern recognition for palleted goods has already been activated in the device’s delivery state. Teach-in of a new pattern takes place with the closed form by means of reset or manual input – a mode particularly suitable for homogeneous batches.

If engineers want to detect just the pallet itself (that is, a closed body), the pattern recognition of the Advanced C4000 Palletiser version is used. In this case the size (up to a maximum of 240mm) and number of feet (two to five objects) of the pallet is evaluated. The advantage is that if the batches are poorly aligned, or are of varying sizes, the C4000 Palletiser Advanced always offers the advantage of active protective field monitoring. Any unintentional passage past the device is prevented.

This solution saves on the use of safety barriers and gates, meaning access to the machine, say for equipping or maintenance purposes, is free. If there are several loading and unloading stations, a single C4000 Palletiser Advanced with a range of 19 metres is now sufficient because the control system can technically guarantee that there is only ever one pallet or grid box travelling on a belt at any one time.

Pattern recognition – in both Sick’s C4000 Entry/Exit or Palletiser versions – is more economical than muting solutions in both installation and operation terms. The lower number of components (the lack of supplementary sensors, swing doors, barriers/entrance gates or indicator lamps) reduces the probability of problems. This permits significant cost savings during planning and construction, during mounting and electrical installation, as well as in running operation and during servicing.