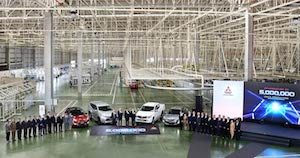 Thailand - The company's plant in Laem Chabang has churned out over 5m passenger vehicles, just two years after it had reached the 4m mark. According to Osamu Masuko, CEO of Mitsubishi Motors Corporation, the news reflects increasing demand in the region.

"We have always had the confidence in Thailand's potential for domestic market growth," he commented. "Its long-term policies to grow the automotive industry are also a positive sign for our business."

The OEM first started making cars in Thailand during 1961, and currently operates three plants in Laem Chabang. These have a combined annual output of 424,000 units a year, with units being sold in the local market as well as shipped to 120 countries around the world.

Several companies have recently announced plans to invest in production facilities in Thailand. Mercedes-Benz, for example, said it was building a new battery assembly facilities in Bangkok, while the Tier 1 supplier BorgWarner inaugurated a new turbocharger production plant in Rayong.