Metal working with the experts

Innovations and cutting edge technology developments were on display in every sector of this year’s EuroBlech fair. Traditionally famous for practical demonstrations of machinery and systems, the event featured an even larger number of live machine displays for 2006. For the first time the event covered an exhibition area of 76,000m2 net in seven halls and attracted 64,353 trade visitors. This is a record result for the world’s largest international exhibition for sheet metal working.

The show organisers were particularly pleased with a 25 per cent increase in foreign visitors. The number of visitors from all over Europe, and particularly from Eastern Europe, has grown substantially; those coming from Asia have also doubled since the previous event in 2004. 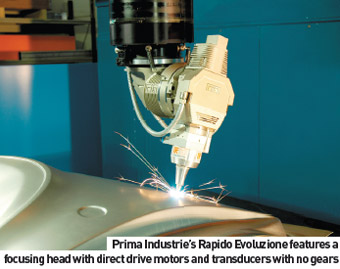 Among the innovative products and services on show was the Rapido Evoluzione, a radically new welding application from Prima Industrie. Rapido Evoluzione. It is larger (X = 4,000mm), faster and, above all, more dynamic (double acceleration) than rival robots. It takes advantage from a new, powerful and user-friendly control and features a very innovative focusing head. Its motors and transducers are totally direct, with no gears, no complex kinematics and no backlash. It has three independent axes with higher dynamics and accuracy (speed: 1.5 rev/s; rotating axes accuracy 0.005°).

Its design is completely modular (each axis is an independent unit), which gives the advantages of enhanced reliability and maintainability. 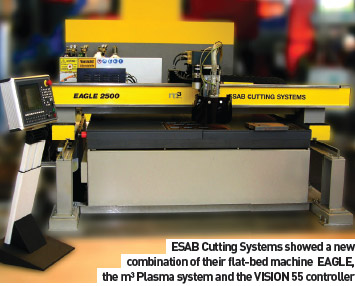 ESAB Cutting Systems gave an impressive presentation of what state-of-the-art plasma technology can achieve today. A combination of their flat-bed machine EAGLE, the m³ Plasma system and the VISION 55 controller demonstrated that high-speed and high precision are no longer antonymous parameters. With m³ Plasma, impressive cutting speeds of up to 35 metres per minute can be realised. What makes the system particularly special is the fact that the user can perform both fast production cuts and highly accurate, sharpedge precision cuts using the same tool and without having to replace any wearing parts. m³ Plasma can be used for plate thicknesses up to 150mm, efficient, fast productions cuts can be performed up to 50mm.

Punching is possible up to 40mm. The best results as regards the cutting quality are obtained when m³ Plasma is used for cutting carbon steels. In this case, the cutting edge is almost rectangular and forms a perfect burr-free weld edge.

Another advantage of m³ Plasma is that the user can even mark the workpieces without having to replace the torch, by simply changing the corresponding parameters on the central control panel. All processes are controlled by the VISION 55 controller which features the real-time operating system Windows CE 5.0 NET and ESAB’s Columbus programming system. The all-inclusive solution is completed by an integrated drilling device as well as a camera-based visual monitoring system for exact alignment of the plates on the cutting bed. 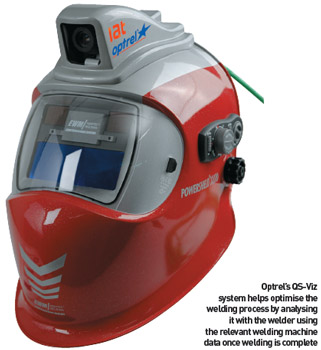 NEFF Pressen showed their range of presses for sheet and solid metal forming, hydromechanical forming, the pulsating system, plastic forming and monitored and documented assembly processes. The company boasts the ability to plan its designs according to modular systems, and is able to integrate the hydraulic production line into an overall system tailored to their customers’ needs.

The NEFF product range comprises presses ranging from 25 to 40,000 kN, designed as universal open-front, double-sided or column machines in horizontal or vertical format. They are individually adjustable and are suitable for both small to medium batch sizes and large-scale series production. They can also be configured to allow high stroke speeds and part counts.

Optrel, makers of active and passive welder protection systems, used the fair to promote a new joint venture between themselves, The Institute of Automation (IAT) at Bremen University, and EWM Hightech Welding. The partners have collaborated on a BMBF-sponsored research project into virtual approaches to welding. As a result of this project the QS-Viz system was debuted at the show and will soon be verifying the laboratory test results in practice.

The QS -Viz add-on system resulting from the project offers enhanced access to the welding process for the first time by allowing visual documentation in addition to the procedures and settings of the welding machine.

This means that the length of the arc, the droplet transfer, the welding bath and the undercuts can be detected and evaluated visually.

With the previous camera system, it was impossible to record the environment of the welding process. Due to the intensity of the arc during welding, the environment could not be detected by the camera. The camera used in QSViz has an extremely high dynamic area, enabling a detailed display in a grey value image. This means that not only is the arc displayed cleanly, but also the environment is visible in the image and helps with orientation.

With the Kuka KR 175 spot, Kuka’s latest product for the field of welding, the company has brought together all its technological expertise in the area of spot welding. The result is a robot that is specialised in pointto- point motion. The integrated weld controller expands the robot into a powerful process machine.

System interfaces between the robot and the weld controller bring additional costs and are a potential source of faults; with the new Kuka process robot, however, these are eliminated. The operator no longer has to cope with two different control environments but can operate the entire application – motion and welding process – from the Kuka control panel. This means that one whole interface with the higher-level system is no longer required.

Moreover, the programmer benefits from simpler process optimisation, as the motion and the welding parameters can be changed centrally from the robot control panel.

The Y-axis is designed as an arm with a working range of 1,500mm. It supports a very narrow, compact, and fast Z-axis with a 750 mm working range. Two rotation axes give it complete 3-D flexibility.

The machine produces highly dynamic performance by means of high travel speeds and axis accelerations up to 1 g. The focus position and diameter are constant.

They ensure uniformly high processing quality regardless of laser power and component position in the working range.

AP&T showed its recently introduced ODEN multipurpose press which marks a total renewal of its product line for hydraulic presses. The generation shift also entails a switch to a new naming system for the products, with inspiration taken from Old Norse mythology.

ODEN is available in five basic variants with press forces between 1,000 and 3,150 kN and is designed for drawing, embossing, pressing and hydromechanical forming.

“We’ve examined all of our modules, such as electrical cabinets, frames, press beds and hydraulics, as well as developing an entirely new modular system with fewer but even more flexible modules,” said Bengt Walkin, Technical Manager at AP&T Press Systems.

The newly developed operator interface LOGOS has a very clear graphical interface that facilitates programming of the press’s sequences and the entry of operating data.

The system is modularly designed, which makes it very easy to upgrade and adapt for new functions. ODEN is equipped with load-sensing hydraulics, which enables several cylinders to be activated simultaneously and even controlled independently of one another.

Motion Tuning is a direct development of the successful SynTEC technology and it offers customers a convincing means of integrating existing machines within a highly productive machine group. For example, Müller Weingarten has taken the entire mechanisation and drive expertise that went into the SynTEC series and adapted it for retrofitting. The whole package is now available for its customers. Furthermore, creative peripheral solutions such as front-of-line and end-of-line modules round off the Motion Tuning range.

Under the concept of Control Tuning, the company presented its Control Center which is a new control and visualisation platform. The Control Center connects modern industrial design with a high-performance user interface developed especially for the particular requirements of this business. Together with the tools for digital simulation and virtual startup of press lines (Virtual Tuning), the customer receives intelligent optimisation solutions that offer greater safety, better performance and faster value.