Following a site analysis in 2013, Volkswagen decided to construct a new factory in Wrzesnia, Poland, to assemble the Crafter van. The speed at which this enormous factory – one kilometre long and 400 meters wide – was built is a testament to the enthusiasm for the project.

Construction was completed in just 23 months, more than six months ahead of schedule. And while all this was going on, Volkswagen Commercial Vehicles (VWCV) was developing the new Crafter. The company ultimately spent €800m ($910m) on the site in Wrzesnia, and this investment is expected to pay off quickly. Werner Steinert, head of PWQ-3/1 QS-Analysis/Metrology at the plant, is absolutely certain it will, stating: “I see a bright future for this site.”

The Crafter van – designed to meet every needThere are lot of reasons for Steinert’s optimism. For him, an important factor for the market success of the Crafter, in addition to the quality of the vehicle, is the wide array of models available. VWCV has used the end of its cooperation partnership with Daimler to give its customers more options to choose from. Currently the Crafter comes in 29 different models, and in future there will be 60 base versions. In addition to selecting from three different drives and four possible engines, customers will also be able to choose between three different lengths and heights. This variety will ensure that the van is suitable for a wide array of different uses – from serving as an ambulance to a delivery van.

Developers are making sure that the variety of models available does not compromise the vehicle’s design. That explains why the Crafter does not look like any run-of-the-mill van. Quite the opposite, in fact. For the site’s head of quality assurance, this commercial vehicle features a “top notch design.” To show just what he means, Steinert walks through the measuring lab at the new production facility, pointing with his right hand at the “filigree folds” in the metal sheet for the hood of the vehicle.

Other design details, such as the front of the Crafter, remind Steinert more of a car than a van. The designers’ desire to get every detail just right has spurned them on to give this vehicle a streamlined design in spite of its size. And, of course, the clearances “are just like those in our cars,” says Steinert. In order to ensure that no compromises are made in design or function, VW is using leading-edge manufacturing and quality control systems at its site in Wrzesnia, making it – in Steinert’s words – “one of a kind globally.”

Optical measuring methods for optimum qualitySteinert is certain that “no other automobile manufacturer is using as many optical measuring methods as we are at our measuring lab in Wrzesnia.” Even the term ‘measuring lab’ does not do justice to the enormous hall where measurements are performed: spread out over 1,550 sq.m and with a height of 14 meters, it is always 20°C in this climatised space. Alongside multiple set-up locations, the measuring lab houses one measuring station with four coordinate measuring machines as well as six stations where measurements are performed with optical sensors. Steinert helped develop this innovative approach himself and concludes that “it has worked out great.”

Part of the elaborate design is an offline station in the measuring lab with four Zeiss AIMax sensors from Carl Zeiss Industrielle Messtechnik, which have been set up just like the in-line stations on the production line. “This approach has more than paid off,” reports Steinert. Thanks to this station, the Polish engineers under Steinert’s supervision work in the measuring lab programming the software for multiple in-line stations. “This requires actually programming robots, which is quite a challenge,” he explains. The software for controlling the robots is installed with just a click of the mouse, meaning there is only a slight delay in production when the new program is run. “If we did not have the offline station, then we would continually be interrupting production to program the in-line stations,” adds Steinert.

In light of the many different Crafter models and the numerous measuring programs required as a consequence, the company simply could not have achieved its ambitious production goals without this setup. After attending just two training courses conducted by Zeiss and an intense orientation phase, the young engineers in Poland are now able to program completely independently. This independence is important to Steinert because it enables him and his team “to act very quickly if we need to optimise the robot programs or image processing parameters.” 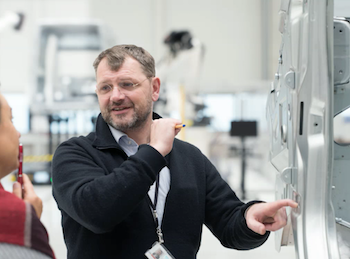 100% inspectionFor a Crafter to roll off the production line every 3.5 minutes requires the in-line measuring technology to operate in sync with the stipulated timing in production. In addition to the Zeiss AIMax sensors’ very high level of basic accuracy, Steinert was also impressed by the speed of the system offered by Carl Zeiss Industrielle Messtechnik. “We wanted the best robot-based 3D in-line measuring technology on the market,” says the 25-year VW veteran.

The decision to go with Zeiss systems was made in 2015. And there was something else that made Zeiss the right choice: “We wanted a partner that has skilled employees who can also work under extreme time pressure,” says Steinert. “It was already clear after the first few weeks of production that the in-line approach was the way to go.” All five stations work perfectly. “I would certainly opt for Zeiss again,” Steinert adds.

Performing 100% inspection in Poland means that every car body part – from the undercarriage to the side panels – passes through the corresponding in-line measuring station. The undercarriages for the different models vary the most, and for this part between 82 and 122 measurement points are inspected to ensure the stipulated tolerance specifications have been met. To help the entire measurement process run smoothly, a RFID chip on the undercarriage transfers the information necessary for selecting the right measuring program to the in-line station. As soon as the undercarriage is in position, the software already knows what subprogram should be run to control the four measuring robots – no human intervention is necessary.

Programmers have already defined when a particular characteristic needs to be inspected and which Zeiss AIMax sensors should be used. As soon as the measuring program starts, all four robot arms “wake up” from their resting position. Emitting a quiet hum, they travel smoothly along the body panel, which can be up to eight meters in length, for three minutes. During this time, the sensors head to one of the six columns installed in the in-line station. Spheres are attached to these artefacts. The sensors regularly measure these from three different positions. The captured data is used to continually recalibrate the measuring system. This process is necessary to ensure a high level of precision during the measuring process. If the software did not account for the heat emitted by the robot arm motors, the entire system would be adversely affected.