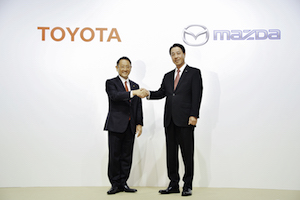 US - The two companies have announced that they are establishing a new joint venture (JV) company called Mazda Toyota Manufacturing, USA (MTMUS). The news comes less than a year after they signed an agreement to enter a business and capital alliance, and follows on from a decision to build a plant in Huntsville, Alabama.

The MTMUS plant will cost US$1.6 billion. Preparation of the land is to start soon, with full-scale construction commencing in early 2019 and vehicle production slated to begin in 2021. It will be located close to Toyota's engine plant in Huntsville, which makes 4-cylinder, V6 and V8 engines with an annual production output of around 700,000 units.

"We hope to make MTMUS a plant that will hold a special place in the heart of the local community for many, many years," stated Mazda's executive officer Masashi Aihara, who will serve as president of MTMUS. "By combining the best of our technologies and corporate cultures, Mazda and Toyota will not only produce high-quality cars but also create a plant employees will be proud to work at and contribute to the further development of the local economy and the automotive industry. We hope that cars made at the new plant will enrich the lives of their owners and become much more than just a means of transportation."

For Toyota, the establishment of MTMUS represents an important step in "improving our competitiveness of manufacturing in the US," explained Hironori Kagohashi, executive general manager of Toyota and MTMUS's executive vice president. The company reported a 0.6% year-on-year decrease in US sales during 2017, but believes that the US market will be a key growth area as the trends of electrification and connectivity take hold.

Toyota has also been building a plant in Guanajuato, Mexico, in order to serve the North American market. It originally planned to make the Corolla there, but has since revealed that it will now house Tacoma production instead. According to a Reuters report, the OEM also confirmed that it was scaling back investment in the Mexico plant by 30%, cutting planned production figures in half to 100,000 units per year.