ArcelorMittal’s patented partial ablation technology was developed to ensure that hot-stamped laser-welded blanks (LWBs), made from the latest press-hardenable steels (PHS), are as safe as possible. Although it was first used industrially in 2007, the patented partial ablation process is proving more popular than ever with carmakers and has led to dramatic improvements in lightweighting and safety. By 2020, ArcelorMittal expects the technology will have been used to produce more than 70 million PHS LWBs using ablation technology at locations around the world.

PHS is typically supplied with an aluminium-silicon (AlSi) coating that protects the underlying steel during thermal treatments and prevents corrosion. ArcelorMittal’s patented partial ablation process removes a thin strip of the AlSi coating on the edge of the blanks before they are laser-welded together.

If the coating is not removed before laser welding, the aluminium it contains can weaken the weld and cause the part to fail. Around 99% of the PHS LWBs made today utilise AlSi coated steels.

Demand for partially ablated LWBs has grown dramatically over the last five years. In 2018, ArcelorMittal produced over 10 times more ablated LWBs than in 2013.

If the AlSi coating is not removed before welding, aluminium can pollute the weld and lead to part failure (left). Partial ablation ensures a strong and durable weld (right)

The PHS LWBs using ablation technology are produced in America, Europe and Asia, and ArcelorMittal continues to make significant investments in its facilities to ensure it can keep up with demand from the world’s carmakers.

What is a laser-welded blank?

LWBs combine two or more steel blanks into a single laser-welded blank. PHS LWBs are then hot stamped to form the part. The technology ensures the right steel, in the right thickness, is in the right place for safety and performance. The crash behaviour of LWB parts can be finely tailored to ensure maximum weight savings while enhancing safety. When advanced high-strength steels, such as ArcelorMittal’s PHS grades, are used to form an LWB, the part can be significantly lightened. This ensures lower fuel consumption and emissions during use and minimises the amount of steel required.

The use of press-hardenable steel laser-welded blanks in modern vehicles began to grow rapidly from 2009, largely in response to global emissions regulations. In 2013, partially ablated LWBs were used to manufacture the first single-piece hot-stamped door ring made entirely from PHS. The solution was first deployed on the 2014 Honda Acura MDX, and led to weight savings of 20% compared to a conventional door assembly. The Honda Acura MDX went on to win numerous car industry awards, which recognise the pioneering manufacturing process and safety improvements of this steel solution. These include the 2014 AMM Award for Steel Excellence (Best Innovation: Process); two 2014 PACE Awards (Innovation Partnership and Manufacturing Process and Capital Equipment); and the 2014 CLEPA Award (First place in the ‘Safe’ category). 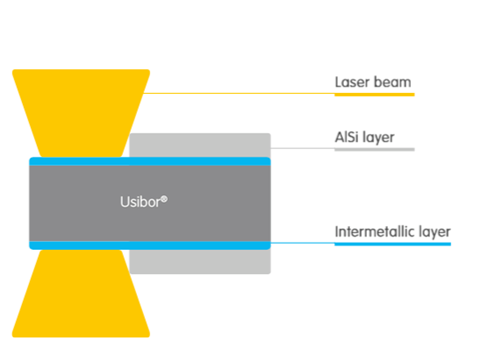 Using ArcelorMittal’s patented ablation technology, a laser beam is used to remove the aluminium-silicon layer on the top of the press hardenable steel. The intermetallic layer is preserved during the operation to ensure corrosion resistance. After ablation, two or more blanks are welded together to form a single PHS laser-welded blank (LWB). PHS LWBs are then hot stamped to form the part

The single-piece hot-stamped door ring has now been adopted by many OEMs including Chrysler and Dodge. The 2017 Chrysler Pacifica received the Cars.com Best of 2017 award, and the US New Cars Best Minivan for the Money award.

The door-ring concept has been adapted to include a laser-welded inner and outer front door ring system. The first production vehicle to use the new inner and outer door ring blanks will be the 2019 Honda Acura RDX. This latest development has been named as a finalist for the 2019 PACE Award. At last year’s WCX18: SAE World Congress Experience in Detroit, the partners unveiled the world’s first outer and inner door ring system to better balance strength and performance while removing additional weight from the vehicle. 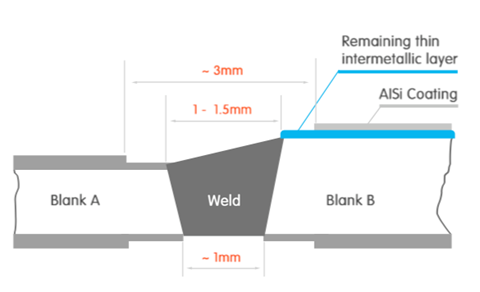 Using ArcelorMittal’s patented ablation technology, a laser beam is used to remove the aluminium-silicon layer on the top of the press hardenable steel. The intermetallic layer is preserved during the operation to ensure corrosion resistance. After ablation, two or more blanks are welded together to form a single PHS laser-welded blank (LWB). PHS LWBs are then hot stamped to form the part. ArcelorMittal’s patented ablation technology removes the AlSi coating while preserving the intermetallic layers which sits between the coating and the underlying steel.