While the use of advanced composites in structural applications has hogged the limelight in recent years, these lightweight materials also have many advantages for the manufacture of components for conventional, hybrid and electric automotive powertrains. AMS sat down with senior executives from Ghent, Belgium-based thermoset plastics specialist Vyncolit NV (a subsidiary of Sumitomo Bakelite Co., Ltd.) to find out more.

Vyncolit is looking to capitalise on this disruption, promoting the use of large, affordable, high-volume injection-moulded composite powertrain components. Its managing director, Pieter Vanderstraeten, says: “All OEMs, have a lot of work to do in the next six to seven years to hit global environmental targets. Lightweighting will be key in hitting them, regardless of the drivetrains employed.”

In under-the-bonnet applications, heat-resistant and dimensionally stable composites have been instrumental in the shift towards smaller, more efficient, but hotter-running engines. However, their use has been limited to smaller and non-structural parts, such as air ducts and engine covers. Vyncolit believes there is great scope for the use of these materials in larger parts subjected to a great deal more mechanical stress.

Indeed, in a 2015 project with the Fraunhofer ICT, the company injection-moulded a single-cylinder 650cc Rotax unit from a 55% glass fibre-reinforced phenolic. The injection-moulded part delivered the same performance as a die-cast aluminium version, but was 20% lighter. More recently, the company has worked with a with a big carmaker to develop a composite monolithic valve cover with integrated cams – a part subject to high thermal and dynamic loading – using the same glass fibre-reinforced phenolic. The weight of the part is reduced by more than 900g because the cams no longer need to be bolted on.

According to Vyncolit’s chief innovation and technology officer, Hendrik De Keyser, the advantages of composite parts over metal alternatives do not end with weight savings. For instance, he points out, the parts demonstrate improved noise, vibration and harshness (NVH) behaviour, and thermal tests show a reduction in the heat radiated from them to the surrounding environment.

Multiple functions can be integrated into one component. De Keyser adds: “For example, we have been working with several tiers on replacing aluminium fuel pumps with those made from plastics. Not only did this switch of materials lead to a weight saving of 40%, it also cut costs by 30% through a reduction in part count.

Furthermore, manufacturing costs are lower. De Keyser explains: “The manufacture of large parts using composites requires significantly less capital investment than if aluminium was used. Tooling for aluminium parts typically lasts for one hundred thousand shots; when using our composites, the tooling can last for five hundred thousand shots. We can also mould these parts to tighter tolerances than is possible with aluminium parts, which saves a lot of machining.”

Finally, Vyncolit’s composites also perform much better in life cycle analysis (LCA) in comparison with thermoplastic and metallic alternatives, and the company has developed a chemical process – currently in commercial operation with a large Japanese tier 1– that enables the resin component to be recycled indefinitely with no loss of mechanical properties.

Such was the success of the initial Rotax project that at the time, De Keyser predicted that automotive engine housings made from composites could enter the market in as little as three years. Was his prediction accurate? De Keyser smiles. “Not entirely, but I’m sure it will happen.”Vanderstraeten picks up: “Getting innovative solutions adopted by the automotive industry can be a tough nut to crack. You need that first early adopter, and then the rest will follow.”

Much of it boils down to the economics of adoption. De Keyser explains: “Carmakers don’t want to carry out a single development project for a plastic part, they want to carry out a mirrored project with an aluminium part as a fall-back position. This has a strong influence on cost.”

Despite this, Vyncolit are in discussions with more OEMs now than they were three years ago, and for a carmaker with the vision and bravery to make that initial leap, De Keyser says, the benefits of large polymer ICE parts are significant.

Meanwhile, the company is also looking at how its materials can be used in hybrid electric (PHEV) and electric vehicles (EVs). Electrification will have a significant effect on the automotive supply chain, according to De Keyser. He explains: “A modern ICE powertrain comprises approximately 1500 different parts. Electronic drive trains have roughly 60 to 70 parts. Competition will be fierce among suppliers of these parts, while others will find that current products for ICE powertrains are virtually obsolete.”

Hybrid and electric powertrains are heavier than their ICE counterparts. In hybrid vehicles this due to the dual powertrain, the battery and the converter. In electric vehicles, the battery is very heavy. The added mass requires a stronger, heavier chassis and bigger brakes to cope, which adds further weight, not to mention expense, limiting the range of the battery. “It’s a vicious circle”, De Keyser notes. 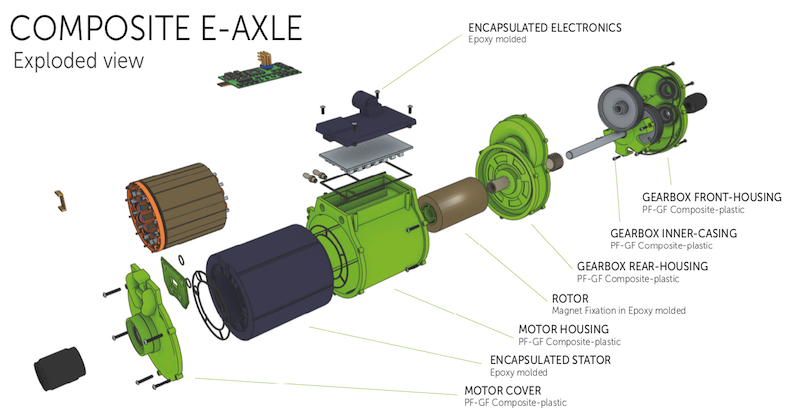 Using composites in e-axles, parts can be overmoulded to create light and strong housings for them in a cost-effective manner

Vyncolit’s materials are already being used in induction electric motors for Renault’s EVs and in the fixation of magnets for a carmaker in Asia – these parts have been in serial production for two years. The company is now targeting developers of E-axles. PHEVs and EVs currently feature one or two electric motors at the front and one or two at the rear, together with a power converter and a control unit. All of these are separate components. In E-axles, the electric motor, power electronics and transmission are combined in a compact unit directly powering the vehicle’s axle. This aids in making electric drives less complex, cheaper, more compact and more efficient. Using composites, these parts can be overmoulded to create light and strong housings for them in a cost-effective manner.

De Keyser says: “We have epoxy coating powders that can be used for insulating the wires on hairpin electrical motors. Circuit boards for the engine control unit can be overmoulded and integrated and the housings can be made out of our materials. The stator – the stationary portion of an electric motor – and the circuit board can be put together in a mould and in one shot you have a part that is ready to use – there is no extra assembly and reliability is high as everything is protected. These parts are light in weight, and as many functions can be integrated into them, costs can be kept down.”

Composites could also be excellent candidates for the manufacture of brake backing plates for PHEVs and EVs. Current backing plates are made from steel, to which the friction material is bonded. By using phenolic composites rather than steel for these parts, their weight can be reduced by up to 70% – a significant saving, given that there are eight backing plates in total on each vehicle. Production is simplified. Perhaps most importantly, composite backing plates are inherently corrosion resistant. This is a boon for any vehicle, but will be of particular significance for PHEVs and EVs. In these vehicles, the regenerative braking system plays and important role in deceleration, meaning that the friction brakes are used much less, and often corrosion renders these brakes unroadworthy before they have actually worn out. The use of composites eliminates this problem.

Composites make a compelling case for the production of such parts, but what hurdles remain? According to De Keyser, industry awareness of what composites are capable of is an issue: “Carmakers have to design for composites. They can’t copy a metal design”. For Vanderstraeten, Vyncolit must prove that its solutions are suitable for mass production. The company is tackling both of these issues head-on with its sbDrive Demo Centre, which it opened in 2017. Using the centre’s highly automated 500-t injection moulding machine, the company and its customers are working together to design and manufacture a wide range of composite parts – literally moulding the future.