Leaping networks at a single bound

Information standardisation means the protocol CIP Safety can easily transfer for use on EtherNet/IP. AMS reports on an open standard network solution for the factory floor

Following the success of CIP Safety’s adoption by DeviceNet users in the automotive world, the safety protocol’s developers have gone a step further recently and had it TUV certified for Ethernet/IP.

“After we’d had CIP Safety certified on DeviceNet, it proved relatively painless to approve it for use over EtherNet/IP and we published the specs for that early last year,” says CIP Safety JSIG chair and Rockwell Automation NetLink Manager of Development, Dave Vasko.

It was largely painless because of the network independent way CIP Safety was designed. CIP Safety is a methodology in the application layer that’s transport independent. Whether you use CIP Safety over DeviceNet Safety or over EtherNet/IP Safety, the same type of information from the application layer standpoint is basically the same. That gives safety vendors an easy means of developing products for both protocols; and it gives users an easy means of parsing the information from within the protocol to be able to put it into a usable layer for their program. 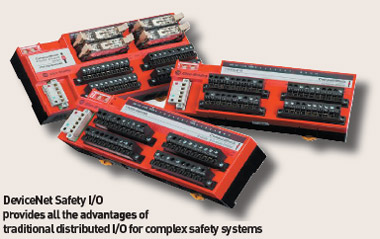 “The nice thing about CIP Safety is that it gives you the ability to have the same type of information available regardless of what protocol you use,” says Vasko. “You don’t have to worry about doing a conversion from protocol to protocol; it’s all handled down at the transport layer. Once it gets up to the application layer, it’s basically the same information. In fact, because it’s an end-to-end protocol you can start with a transmission on DeviceNet and end up on EtherNet/IP. You can go across hops, and across networks. What’s really key is that because it’s an end-to-end protocol, devices – switches, routers, etc – don’t need to be certified.”

CIP Safety over EtherNet/IP is going to allow designers to create bigger applications and do interlocking over a greater distance. For example, with robot cells, designers may use DeviceNet within the cells, but use Ethernet/IP for interlocking between cells – essentially using Ethernet/IP for communications between safety controllers.

“And another application we think we’ll see is sending larger packets of information via Ethernet/IP, just because of the larger bandwidths it can carry," says Vasko.

CIP safety: how does it work?

Why would you trust a network for a safety application? “People are a little sceptical about it because we’ve all had networks go bad,” says Vasko. “But the key is that there’s an expectation when it will work correctly, and if it doesn’t, within a given timeframe, then the end-nodes will decide to go to a safe state. That’s what allows it to operate. Either you get a packet through correctly, or you go to a safe state.

That’s how we get CIP Safety to operate across a network.

And to do that we use a time stamp, which is a very strong measure for ensuring the packet got there on time. Plus we use additional protection measures, like a CRC [cyclic redundancy check] – a code word that you transmit with the data to ensure it all matches up. It’s like a safe word – if they don’t match up, it’ll stop.”

The biggest improvement in using CIP Safety – either over DeviceNet or EtherNet/IP – is in productivity because plant maintenance staff can get an indication of where system failures are faster. With an electronic system, using the same system that is controlling both the control system and doing the safety application, it knows where the problems have occurred faster and can relay that to the user quicker.

And commissioning time is much faster.

“The fact that it's an integrated system, doing both the safety and the standard, means the people that are developing it are using tools similar to what they’ve used in the past,” says Vasko. “We were surprised at the amount of time people were spending doing communications between dedicated safety systems and dedicated contro vl systems. That was like 50 per cent of the commissioning time – when you use an integrated system, that just goes away.”

For example, if you’re planning regular maintenance inside a cell, designers have to “teach” the robots to limit their movement when someone's working alongside them. And it becomes much more complex in terms of different interactions – especially if you’re using relays. “That’s the real benefit: you can make these logical changes in the controller instead of having to hardwire it,” says Vasko.

And the testing effort? In the relay era, designers would have to test all the different cases to ensure it worked correctly – very difficult and time consuming. Now it’s just a matter of working with the software. It automates the verification testing and makes it much easier to debug the system and ensure it's working correctly.

“CIP Safety embraces vendors and is more open than the majority of safety solutions,” says Vasko. “I think you’ll see the majority of vendors coming on board and creating products that interact together – that really allows the vendors to take their expertise and develop the best product, be it controllers, light curtains or scanners.

And then have them all work together. I think that’s the key.”