Laser marking with the Electrox Raptor 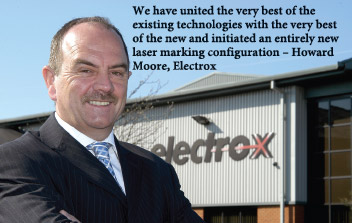 A British company has launched a unique laser marking system that sets a new four-year warranty benchmark and which places it at least two years’ ahead of its competitors.

“This enables us to offer the customer aggressively-priced laser marking systems that perform to the highest standards of quality and reliability, while still being readily affordable,” says Electrox General Manager Howard Moore.

According to Moore, Electrox remains the only fully-integrated laser marking manufacturer in the UK.

Designated Raptor, the new system has been developed entirely in-house, by combining cutting-edge laser principles and a unique light management system, to created EF Technology. “We have united the very best of the existing technologies with the very best of the new and initiated an entirely new laser marking confi guration to provide the total ‘price-performance’ package which end users and OEMs have wanted but which has not been available until now,” says Moore, who added that Raptor has given Electrox ‘at least’ a two-year led.

Electrox Technical Director Jon Larsen says: “EF Technology provides very short energy pulses of 25ns, compared with anything from 70ns to 200ns in other systems. “This enables high peak powers [up to 10kW] to be combined with low pulse energies, facilitating high contrast, low damage marking on metals and plastics, while the highly controllable beam virtually eliminates surface damage around the mark and to delicate substrates.

“This means EF Technology to be used for marking components where surface fi nish and retention of material integrity are paramount, especially in demanding automotive applications.”

Raptor is quite compact, with a very small laser enclosure, incorporating an optical unit fully sealed to IP67, to ensure low maintenance even in hostile environments. An annual health check is normally all that would be required, since the system is air cooled, eliminating the need for water or refrigerant circuits, and takes power direct from a single-phase socket outlet.

It is supplied as a modular unit for production line integration but is available with a safety workstation as a turnkey solution. The 5U, 19” rack electronics enclosure is about the same size as a tower PC.