BMW has pulled apart its Spartanburg plant in the US in order to convert it to a one-line flexible assembly system. New demands are defining the OEM's manufacturing infrastructure

Minutes after the last BMW Z4 rolled off the line at the carmaker’s Spartanburg, South Carolina plant late in the fall of 2005, workers began tearing the line down. Every tool, fixture, conveyor track, mat, trashcan, and vending machine that had stood in aid of building Z3s and Z4s for the past 13 years was systemically dismantled and put in storage. Was BMW suddenly giving up on its sporty coupe?

No way. In fact they were tearing down to build for the future. After 72 hours of stripping the place, workers would embark on one of the most complex assembly process restructurings ever attempted within the plant, the conversion of the two-line assembly system into a one-line system.

When BMW decided to add production of its new X5 to its Spartanburg facility, it had to come up with a way to integrate this vehicle into plant production. “We looked at two alternatives: one was to extend the existing X5 line to accommodate the new vehicle, or go to the oneline system,” says Gerhard Menzel, Section Manager for Structural Planning in Assembly. 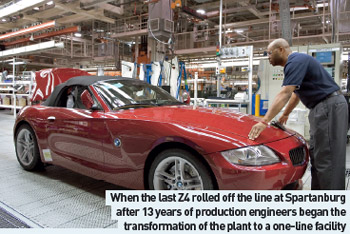 They opted to follow in the footsteps of BMW production plants in Dingolfing and Munich, implementing a flexible assembly line that would allow different models (including different platforms) to be built on a single line.

Spartanburg’s new one-line assembly system allows the automaker to more easily adjust to fluctuations in market demand. It gives BMW the flexibility to vary model combinations from 100 per cent X5s to 60 per cent Z4s and 40 per cent X5s. “We wanted the flexibility to allow market demand to tell us what to build at one time, so we can adjust the ratio of models produced according to demand,” says Sherry McCraw, Manager of Assembly Planning and Engineering.

Workers spent three days demolishing the existing Z4 line before setting about the modifying the line: “We did some minor building expansion and added new conveyor technology along the path of the former Z4 line and on into the new building – basically we extended the existing X5 line,” says McCraw.

In terms of technology partners for the massive project, BMW enlisted Siemens as the major integrator, as well as conveyor suppliers ROFA, AFT, and Lehmer (which has since been folded into ROFA).

ROFA provided a skillet or skid conveyor, a moving platform system that serves the new line’s Trim One area. “And there are also some lift tables that are height adjustable according to the needs of the production associates,” says McCraw. “As you can imagine, with a Z4 you need a different height than with an X5, so we can flexibly adjust the height with the platform conveyor.”

With the skillet conveyor, the platforms run on pits built into the floor, so the platforms are flush with the floor of the assembly building. On top of the platform are the lift tables, which support the car body as it moves through the trim stations.

Car bodies move in from the body shop, on into paint, and are then transferred to the skid where they are pushed on through the assembly process to the trim area. Here associates just walk to the car and place trim parts in sequence.

“Basically, an associate picks a part from the floor, walks across to the skid and places it in the car,” explains McCraw. “Wiring harnesses, carpet, headliners, seats – basically the entire trim package fits in this trim area.”

For the Trim Two area, BMW decided on a ROFA electrified monorail overhead conveyor that moves the car body via a hanging carrier. The overhead conveyor is also height adjustable according to production requirements. “In terms of ergonomics, it’s not so much governed by associate height, but ideal working height,” says Menzel. “We have a standard ergonomic height for the associates and with about 35 per cent female associates in our assembly, you can imagine the height was lower on average than the average male height. But it’s ergonomically favourable for an average height.”

The conversion project also drastically expanded the use of automation for various assembly tasks. With Siemens providing the integration expertise and controls technology, and Kuka providing the robotics, BMW engineers went from three robots on the original Z4 line to 13 on the new flex line.

A massive automation undertaking involved the marriage of the body to the powertrain. Previously, this job was accomplished by manual marriage, with associates physically bolting the car to the powertrain using torque tools.

Since the one-line conversion, car bodies are transported to the marriage station from the interior installation area via an overhead electric monorail. They are then positioned above the preassembled powertrains, which have been transported to the site using the platform skid conveyor system. The powertrains comprise the engine, transmission, all sub-units, chassis and the exhaust system, and are positioned on an assembly unit carrier.

The powertrains are married to the bodies in three steps. First, they are joined by lowering the body from the overhead electric rail via a hoist unit according to Siemens. At the same time, the assembly unit carrier with the powertrain is lifted from below with a scissor-type lift. The movements of several locks, grabbers, spacers and guide elements must be coordinated during the joining process. In the second step the chassis is bolted by robots before the empty assembly unit carriers are lowered in the third step. After the marriage the vehicle is suspended from the overhead conveyor together with the assembled powertrain.

Besides automating the car body/powertrain marriage station, BMW also added a number of robots to automate the installation of sunroofs and front, rear, and side glass into the vehicles. Some transfer operations from one conveyor to another were also automated.

“We have two back-to-back robots that apply the panoramic sunroof. Then we have the panel install, so it takes the sunroof cassette and applies it to the body and bolts it into place,” says Menzel. “For the front, side, and rear glass, a robot automatically applies glue to the glass and lifts it into place on the car.”

Menzel and McCraw agree that the biggest challenge to the conversion project was the time frame. “We did this in four to six weeks over Christmas and New Year,” says McCraw. “Doing it over Christmas wasn’t great because it was cold, plus we had a big storm that shut down some of our major sub-suppliers bringing in cable trays, concrete, etc. We had some interesting challenges there. When you do a major transformation like this in a small timeframe, you don’t have much of a buffer left.”

In terms of technical challenges once the line was up and running, Menzel says factoring in the differences in build time between the X5 and Z4 made for some interesting times. Building a Z4 involves about 70 per cent of the work content of an X5, “and you can balance that pretty well unless you have very specific work content differences – like the panoramic sunroof for the X5 versus the cabriolet roof for the Z4,” says Menzel. “So if there’s very specific content, it’s a little harder to manage; but in general it’s a 70 per cent difference, so the work content is divided with the same ratio as the TM difference.”

As of November 2006, BMW Spartanburg is putting out around 590 vehicles per day at the plant, at a ration of three X5s to one Z4. And they’ve had occasion to tweak the ratio – when the line first opened in January, they started out with a big ratio of Z4s to X5s. “And then sometimes we have the exact opposite,” says McCraw. “It definitely changes things, depending on market demand and what we have to produce quickly.”

McCraw says the most obvious benefits of the one-line conversion have been the ability to integrate different models into the line. Since start-up, they’ve integrated a facelift version of the Z4, a coupe model of the Z4, they’re building new X5s on the same line where they were producing the old X5. “It’s really given us a lot of flexibility,” says Menzel. “Right now, the line is capable of building any vehicle in the BMW family.”

Menzel notes that the Spartanburg plant already had a 98 per cent efficiency rating on its equipment side before the conversion, “but we maintain that on the technical side today,” he says. “It’s really been more the ability of bringing in new processes into the equipment more so than an increase in the efficiency of the equipment itself.”

From a vehicle standpoint, Spartanburg will be accepting at least one new vehicle onto the line sometime in the next year – most likely a "crossover" vehicle.

In terms of the production line, Menzel and McCraw say the changeover to the one-line system is basically Phase One of a two-part expansion at the plant, though no firm decisions have been made to date on a phase two. “One of the next steps will have to involve the paint shop I think,” says McCraw. “It can currently produce what we need, but it’s stretched – plus it’s 14 years old. I would think the next update would affect that area.

“We have the possibility in the next couple of years of being really busy with new models and structural expansion at the same time, but we’re moving in the direction of more expansion. The whole intent of the conversion was to prepare the plant for the future, and to allow us to introduce new models more quickly.”