Cost savings and reduced installation time are the result of Profil’s self-piercing stud, as visitors discovered at the NEAA Expo 2018 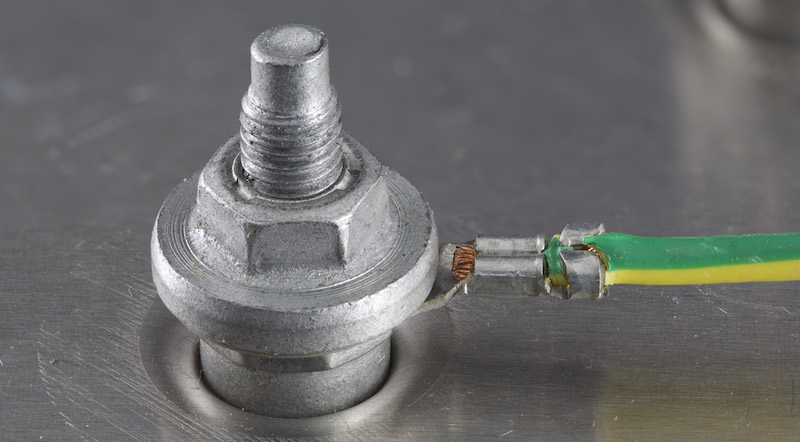 A new earthing stud is allowing automotive global OEMs to achieve the triple benefits of reduced installation time and cost, guaranteed electrical earthing and a substantial reduction in parts count: and visitors to NEAA Expo 2018 saw it on the Profil stand at the event.

Developed to keep pace with the new materials mixes now prevalent in advanced vehicle manufacturing – especially on premium brands – the quality of the new KSB earthing stud from Profil has already allowed several automotive OEMs to reduce the number of earthing points on top-selling vehicles from 30 down to 22. But this 25% saving on parts (and associated installation costs) is only the tip of the story behind the success of the new earthing stud.

Because the stud is self-piercing, manufacturers are also seeing significant cost savings from doing away with the need for the expensive additional processes involved in either welding studs into place or having to drill holes and then bolt them on. Also, with material thicknesses being continually reduced in the quest for weight saving, an added advantage cited by those now enjoying all the benefits of the Profil earthing stud is that the risk of deformation in the parent material – always high with welded studs – has also been eliminated through the use of a cleaner, better mounting and installation method.

Specified worldwide by some of the biggest brands, including Porsche, Mercedes-Benz, BMW and Jaguar Land Rover, Profil’s earthing stud has proven to be ideal for fitting at the body-in-white (BIW) stage, because it is installed complete. Its unique flanged construction also provides a total seal against paint or other material ingress or bleed-through. When the vehicle then progresses from BIW to the electrical installation process, it is a quick and simple task to remove the integral nut on each Profil earthing stud, offer up the required cable shoes to the pair of completely clean faces and then torque it down for a guaranteed earth across the lifetime of the vehicle.

Commenting on the KSB earthing stud range, Profil’s Glenn Williams says: “By working closely with our customers, we are almost always present when new design or production challenges begin to emerge. This involvement at the earliest stages in both arenas has proven to be of great value to our customers, and thus to our business.

“The origination, design and development of our KSB earthing stud range is a good example of what this relationship can result in. As more customers began working with new material types and mixes, including ‘sandwiches’ using multiple materials, it became clear that previously used methods of achieving sound, reliable, practical and cost-efficient grounding or earthing were no longer viable. So, we developed a solution with the new KSB stud. It has proved hugely popular with applications on so many of today’s top-end vehicles.”

KSB earthing studs are available in two versions, and can be used in both steel and aluminium construction, with material thicknesses ranging from just 0.7mm right up to 4mm. Profil recommends that OEMs embrace a galvanic coating on the studs where possible. All KSB earthing studs can be installed either manually for short-run or prototyping purposes, or by bespoke, fully automated installation equipment designed and installed by skilled Profil engineers direct into production lines.

Fastener provides higher performance and reduced costsThe new RND Light range of fasteners from Profil UK is said to offer a raft of advantages to designers seeking to fasten metals, plastics and composites strongly, more efficiently and at lower cost.

RND Light fasteners can also be used in many different material thicknesses, varying between 0.5mm and 2.5mm. Coupled with a fastener weight that is comparable to pierce fasteners and an installed OD which is actually smaller than pierce fasteners, the RND Light range features a clever series of integrated ribs on the riveting part of the fastener. This allows a smaller fastener to outperform bigger alternatives yet also provide greater pull-out resistance.

RND Light data sheets available from Profil contain a revealing series of test results concerning the load-carrying capability of the new fastener: users can see at a glance the demonstrated superiority of RND Light and designers will be quick to appreciate the clear advantages where higher stresses are forecast to be prevalent in a structure.

Profil’s new RND Light is available in sizes M6 to M12 and can be specified with a wide choice of finishes to suit most applications. The company also designs and installs turnkey fully-automated fastener installation systems into production lines, working with customers to deliver bespoke solutions.

Profil UK’s Glenn Williams says: “The new RND Light is a product which was developed from the success of our best-selling standard RND nut. It is proving ideal for design engineers seeking to fasten with increased strength at lower weight: and at the same time it offers production bosses another opportunity to reduce assembly costs. Moreover, existing Profil customers who are already using our standard RND fasteners and installation tooling can switch to RND Light should they wish to do so”. 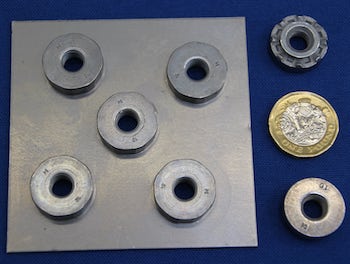 The MHN nut from Profil is small in size, quick to install and brings a raft of new advantages in both design and production engineering

MHN Round series clinch nuts are designed to deliver outstanding performance in material thicknesses from as little 0.7mm right up to 3.5mm, and because they are self-pierce products the fasteners can be used in high-speed fully automated assembly processes just as easily as they can be inserted in manual feed applications for smaller batch runs if required.

An interesting feature of the MHN round series self-pierce clinch nuts is that they can be specified with either a threaded centre in various sizes for bolting straight in to, or alternatively with a plain centre (ie: a non-threaded hole) capable of accepting self-tapping threaded fasteners instead. Both versions use the same installation process, thus providing OEMs with significant flexibility on production lines.

Unlike many alternative fastening and fixing options, Profil MHN nuts can be used in close proximity to folds in the host materials when post-insertion forming is required. Typically, in standard MHN sizes and dependent upon the normal considerations based on the shape of the formed section, material type and thickness, the MHN nut can be utilised just one nut width away from a 90º fold.

In addition to usage with commonly specified steels, the MHN range can also be used in HSLA, stainless steels, and aluminium. The MHN nut self-pierce installation process is straightforward using standard Profil tooling, and the company offers comprehensive application advice covering both design engineering and production tooling with the new product.

Profil UK’s Glenn Williams says: “Our fasteners are used worldwide by most of the major premium-brand vehicle manufacturers, and from our West Midlands base in Birmingham our application engineers are also kept busy with designs that consumers won’t be able purchase on showroom floors for some years yet. We expect the new advantages offered by the MHN self-pierce nut to be quickly embraced by UK manufacturers”.