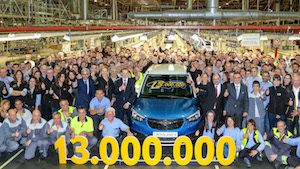 Spain - The 13-millionth car, an Opel Crossland X, has rolled off a production at the plant. Zaragoza is the company's biggest production facility in Europe, and has been in operation since 1982.

"Our day to day focus is on how to get our customers the best product in the most efficient way possible," commented Plant Director Antonio Cobo. "With competitiveness, quality and a lot of passion to generate confidence. We cannot live from the past, and in the future, we must work hard every day to be able to continue celebrating milestones like today. There are no other master formulas."

The 13-millionth car was shipped to a customer in Morocco, which according to Opel, reflects an export offensive and the implementation of the PACE! strategy.

Five generations of the Corsa, Kadett, Astra, Tigra and Combo have been produced at Zaragoza, as have two generations of the Meriva and Mokka. The Crossland X became the first vehicle made at the plant to be based on the Efficient Modular Platform (EMP2) from Groupe PSA.

Opel also recently announced that the new Corsa would be produced exclusively at the Zaragoza plant from 2019, with an electrified version joining a year later. As a result, the facility will become the first to make an electric Opel in Europe.