A lack of infrastructure is holding back the take up of alternatively powered vehicles, but the manufacturing process can be a wonder of manual labour. AMS went to Motomachi to see Toyota making its fuel-cell model 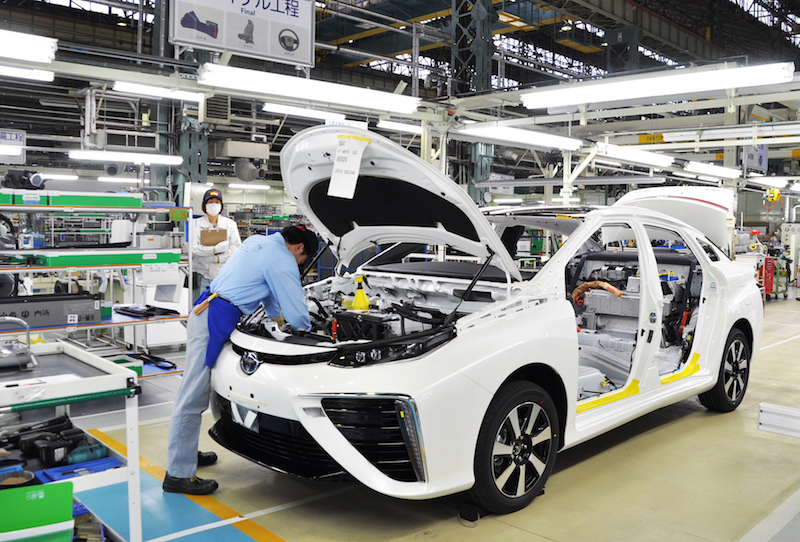 It seems fitting that the factory where Toyota made its first passenger cars, in the late 1950s, is now the scene of pioneering production for potentially the next stage of mobility: fuel-cell vehicles (FCVs). When Motomachi Plant, Aichi Prefecture, turned out the first Mirai sedan, Toyota’s president, Akio Toyoda, said that the 20-year effort to develop a production fuel-cell car had “not always been a smooth journey” but that February 24, 2015, should be remembered as “the day when we took the first step towards the realisation of a hydrogen-based society”.

However, Toyoda acknowledged the scale of the challenge for fuel-cell vehicles to become as commonplace as conventional models which are well-supported by existing infrastructure, saying that the route to a hydrogen future would “not be an easy one” and that Toyota would need to “ensure that the Mirai is of practical use to as many people as possible, as soon as possible”. He noted also that production was beginning “at a slow pace”, with three vehicles per day completed by hand rather than using the advanced manufacturing technology that might be expected for such a futuristic vehicle. “You could say this is similar to how things were when Toyota was just starting out,” Toyoda stated.

Yet it has been eight decades since Toyota was “just starting out” – 2017 is its 80th anniversary – and fuel-cell vehicle manufacture seems to be on a similarly lengthy trajectory. More than two years after Toyoda’s speech, production is still at a low level, almost 100% manual and amounting to just 13 units per day. Up to February this year, only around 3,000 Mirai had been sold across Japan, the US and Europe. Contrast that with Toyota’s figures, excluding subsidiaries, for February 2017 alone (136,738 cars sold in Japan, 127,618 exported and worldwide production of 744,670 units for all segments) and it is easy to see how minuscule Mirai production remains – for now.

Nurturing production and personnelMirai assembly takes place in the 2,400 sq.m former LFA Works which made Lexus LFA supercars until the 500-unit production run ended in December 2012. The two models could both be described as specialist, and during AMS’ tour at the end of May, project manager Akifumi Karasawa confirmed that the Mirai has “followed the way” of the LFA supercar in the amount of care that is put into making it, being essentially handcrafted by a small team. The plant has been operating two shifts, five days a week since January 2016, when production ‘ramped up’ from between three and nine vehicles per day to between nine and 13.

“We make cars; we constantly take on challenges and we use these experiences to help us progress towards the future”– Akio Toyoda, Toyota

The two hydrogen tanks are manoeuvred into position on a dolly

In the absence of the conveyor belt used in mainstream production, the vehicle bodies are rolled to the different stations, of which there are 13, representing 13 processes. There are generally one or two workers per station, but all are trained in Mirai assembly from start to finish to create a well-rounded and flexible team. Karasawa believes that the emphasis on manual skills – enabled by the low volume – is very beneficial from a workforce development perspective, saying that unless people learn with their hands, they will not fully take in the manufacturing know-how they are taught. “We are making a person, not just a car,” he states. After gaining experience on the Mirai, personnel usually end up somewhere else in the Toyota production network; other Motomachi facilities, a different plant in Japan, or overseas.

There are three main stages of assembly: trim, during which parts such as the instrument panel and wiring are installed; chassis, for the integration of the fuel-cell technology; and final assembly, where the seats, windows, carpets and interior are fitted. In each section, there are subassembly areas for components. Toyota famously operates a just-in-time policy (see box below), which means that there is limited onsite storage of parts, the vast majority of which, as for other models, come from Japan’s well-established automotive supply base. However, in April 2016, Toyota and other Japanese OEMs were taught a harsh lesson on the risks of minimal inventory even within a largely domestic supply chain; earthquakes in Kumamoto disrupted supply, halting production at numerous plants. Motomachi was one of the affected locations and Mirai production stopped for a week because parts could not be obtained from one of Toyota’s own plants in Kyushu.

Precision without robotsThe Mirai bodies come into the assembly hall after being welded and painted on the mass production lines at Motomachi. It might be futuristic in terms of its power system, but the Mirai body is made of steel like those of conventional vehicles, due to the high cost of lightweight materials such as carbon fibre, though Karasawa says that Toyota may look at alternatives in future. However, the hydrogen tanks are made of carbon-fibre-reinforced plastic (CFRP) for durability, at Honsha Plant, also in Aichi, and are brought into the former LFA Works on dollies with a small amount of fuel inside. The fuel-cell stack, which generates power in place of a petrol engine, is also made from CFRP, but at Motomachi. 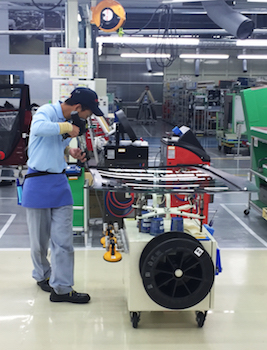 Windscreen adhesive is applied by hand

Besides the tanks and the stack, other components of the fuel-cell system that need to be installed are: the motor, which is powered by electricity generated in the stack; the boost converter; the air compressor; and the battery. The motor is the last of these elements to go in, installed along with the driveshaft, front axle, inverter, water heating unit, high-voltage cable, front suspension, rear axle, front bumper and wheels.

For integration into the body, which is suspended overhead, the stack and a pair of tanks are raised on a dolly, then a worker on either side tightens the bolts to fix the position. The dolly is lowered and the personnel adjust the torque with QE wrenches, which send data to a tablet via Bluetooth; the production might be manual, but it is not unsophisticated. A green colour indicates that the torque is within acceptable parameters, while red shows that it must be altered before the body proceeds. Also used on the Lexus line at Motomachi, tablets were introduced to Mirai manufacture about one year after the start of production, replacing paper notes and improving quality control. The personnel have adapted them to suit their daily work by adding strips of aluminum on the touchscreen, so that they do not have to remove their gloves to activate it.

Even in cases where data is not transmitted, the tablets are useful as a means of displaying task lists at the different stations, such as for windscreen installation in final assembly. Here, a worker skillfully applies adhesive to the edge of the windscreen at the precise rate of 6.5cm per second, then two operators use suction devices to carry it over the body; a third opens the bonnet and reaches through the gap to assist placement. Unusually, and in another sign of the care that goes into Mirai production, measurements are then taken with a gauge to ensure perfection.

At this stage, along with the glass, the external power supply system, vehicle interior and engine bay are fitted. The final interior trim installations involve the seats, doors, steering wheel and inverter cover. An ignition check is then performed before the vehicle goes to final inspection.

The much-imitated Toyota Production System which has led the way on lean manufacturing for more than half a century has now spun off a new methodology focused on harmonising planning and design to increase efficiency. The Toyota New Global Architecture (TNGA) will involve the extensive standardisation of components to make vehicle development and production easier as well as lowering costs, according to the OEM.

TNGA emerged from the global economic downturn of 2008, which led Toyota to review its way of operating and embark on a new direction to achieve sustainable growth. The OEM’s policy of appointing a chief engineer for each new model and its efforts to build cars to meet local demands had resulted in a proliferation of products – as many as 100 platforms and sub-platforms, plus around 800 powertrains. Under TNGA, fewer platforms will cater to the entire product line-up from compact sports cars to SUVs, with the size and position of key components also standardised. Toyota believes that it will be able to do this while still giving customers a wide range of choice on styles, since the standardised elements will largely be internal.

This new architecture will change not only Toyota’s cars but its factories, which the OEM says will be smaller and cheaper, with equipment that is less expensive to install and maintain. Inside, the traditional conveyor belt set in the floor will be replaced by one which sits on the surface and is constructed in sections, meaning that it can be reduced or extended as required. In parallel, machinery will be mounted on rollers instead of bolted to the floor, so that it can easily be moved if the length of the line changes.

The first Toyota factory specifically designed to build TNGA vehicles will be Celaya in Mexico, which is due to open in 2019 to make the Corolla. But over in Japan, where there is little scope for constructing new factories, the OEM is having to adapt existing facilities to accommodate TNGA models. Five have recently entered production – the Prius, Prius PHV, C-HR, Camry and Lexus LC500 – but so far few details have emerged about their manufacture under the new methodology.

Releasing hydrogen’s potentialAccording to Karasawa, it would be possible to build up to 50 Mirai per day in the current manual operation, though component production for the fuel-cell technology would also need to keep pace. Based on cost-effectiveness, he estimates that the tipping point for automation would be around 100 units a day. Yet the problem for mass-production expert Toyota, routinely the world’s biggest vehicle-maker, is not capacity or capability but demand. As with other alternatively powered vehicles billed as the future of mobility, demand for the Mirai is being limited by a severe lack of infrastructure to make purchasing a practical choice for consumers. 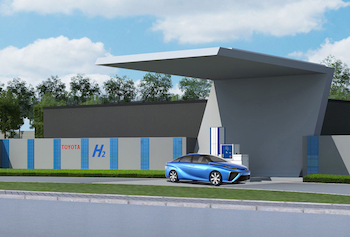 Toyota is setting up a hydrogen station at Changshu, China

Perhaps, though, some progress is being made. In May this year, Toyota’s original infrastructure partners, Iwatani and JXTG Nippon, were among 11 companies – including OEM rivals Nissan and Honda – to join a collaboration aimed at the large-scale construction of hydrogen fuelling stations. This ‘all-Japan’ plan has emerged from the government’s ‘Strategic Roadmap for Hydrogen and Fuel Cells’, revised in March 2016, which targets 160 operational stations and – rather optimistically – 40,000 in-use FCVs by fiscal year 2020. Toyota’s statement in May revealed that the collaboration may consider establishing a new business to support these aims, suggesting that this would happen “within 2017”.

Further afield, Toyota announced in April that it would establish a hydrogen station at its R&D base in Changshu, China, and also send two Mirai to the country in October for demonstration tests up to 2020, as part of the United Nations-funded project, ‘Accelerating the Development and Commercialisation of Fuel Cell Vehicles in China’. Beyond this, Toyota is proceeding with demonstration tests in Europe and countries such as Australia, the UAE and Canada.

“We make cars; we constantly take on challenges and we use these experiences to help us progress towards the future,” said Toyoda at the Mirai production launch in 2015. Turning a fuel-cell vehicle into a high-volume model will certainly be a challenge, yet looking at recent developments it is fair to say that Toyota is not merely hoping for a miracle but set on making it happen.