Compared to gasoline- and diesel-powered vehicles, electrified vehicles are in their relative infancy, with metals and metal components being deployed in novel ways in order to increase range and improve performance. At the same time, vehicle manufacturers and lower tier suppliers are only willing to adopt fabrication technologies that are scalable and highly cost-effective. As a result, lasers are favoured over many other methods for welding, cutting, hardening, brazing and other applications, since they offer non-contact, wear-free, consistent and high-speed processing. However, the demands of delivering advanced functionality components frequently outstrip conventional laser processing. Here, we look at two innovations in laser welding specifically targeted at e-mobility automotive components.

Aluminium battery lid weldingOne key step in the production of the lithium ion batteries used in electric vehicles is the welding of battery cases. It’s critical that this weld produces a hermetic seal that will last over the lifetime of the component. In particular, this seal must prevent moisture infiltration because water reacts strongly with lithium, creating gas and pressure which could destroy the device. Furthermore, the welding process itself must produce no spatter, since metal particles (as well as moisture) can create internal leakage currents which would short-circuit the battery. Finally, the weld must be mechanically strong enough to withstand rough treatment, or even the shock of a collision.

Sealing the aluminium battery case has traditionally been performed using laser conduction welding because the battery walls are thin (< 1mm). However, using conduction welding, it’s difficult to achieve sufficient penetration to produce a strong enough weld with sufficiently low porosity to prevent the intrusion of moisture. But, using higher laser powers to achieve a deeper penetration (keyhole) weld runs the risk of creating pores, which may lead to low welding strength, and virtually always causes some spattering.

Extensive development work at Coherent Rofin has proven that one solution for high-speed, spatter-free deep welding of metals it to modify the intensity profile of the focused laser spot on the workpiece, so it departs significantly from the traditional, single-peaked Gaussian distribution. In particular, this research has shown that a beam consisting of a central Gaussian distribution spot, surrounded by another concentric ring of laser light, can provide an effective approach.

Coherent provides FL-ARM systems with output powers ranging from 2.5kW to 10kW. The power in the centre and the ring can be independently adjusted on demand over a range of from 1% to 100% of the nominal maximum output. The core and ring beams can even be independently modulated, at repetition rates of up to 5kHz.

In this arrangement, there are a virtually unlimited number of possible combinations in terms of the power ratio of the inner to the outer beam. However, all these can be broadly grouped into the configurations shown in the diagram below. These basic patterns can then be varied to deliver a wide range of processing characteristics to optimally service a diverse set of applications. 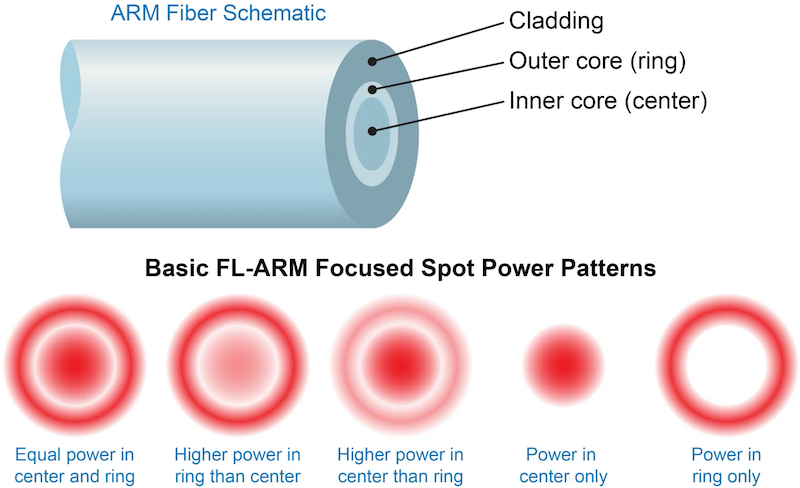 For the fibre-laser welding of aluminium, one challenge has been that the material has relatively low absorption in the near infrared. Small, unpredictable variations in absorption cause the penetration depth to vary, resulting in an uneven weld. To address this, and to deliver the sufficiently fine control needed for keyhole welding aluminium battery cases, the FL-ARM beam is configured with power in both the centre and in the ring. Using this particular power configuration, the leading edge of the beam raises the aluminium temperature sufficiently to increase its absorption at the laser wavelength.

Then, the centre of the beam creates the keyhole, which is now very stable due to the pre-heating. The trailing edge of the ring beam keeps the melt pool open long enough to allow gas to escape. Because the keyhole is stable, and the material doesn’t re-solidify as quickly, the entire process is more consistent, and the process window is larger. The ultimate result is uniform, consistent material penetration and higher quality, spatter- and porosity-free welds.

‘Hairpin’ weldingAnother demanding e-mobility production challenge is the welding of bar-wound copper pins into the stator of electric motors. These stiff pins (called ‘hairpins’ because of their ‘u’ shape), replace the wire windings traditionally used in an electric motor. Because they are much more rigid than wire, their orientation in the motor can be controlled more precisely, ultimately resulting in the ability to handle greater thermal stress and higher motor efficiency.

In the assembly process, the individual hairpins are first loaded into slots in the stator. Then, the ends of adjacent hairpins are welded together in order to connect them electrically; when the entire motor is finished, all the hairpins will act as a single, long, twisted conductor, just like the windings of a conventional electric motor.

The two key imperatives of this process are that the weld maintain proper mechanical alignment of the pins, and also not produce any defects (inclusions). Hairpin alignment is important because the exact winding shape directly affects motor efficiency. Defects must be avoided because these increase the resistance of the final winding, thus reducing its electrical efficiency, and might also lower the mechanical strength of the assembly.

Coherent Rofin has developed a fibre laser-based method for performing hairpin welding that achieves all these goals. The first key element of this process, which is based on a standard HighLight series fibre laser, involves the use of so-called ‘beam wobble’. Specifically, in this case, the size of the focused beam on the work surface is deliberately made smaller than the total area to be welded. However, the position of the spot is rapidly scanned (wobbled) to cover that entire area. 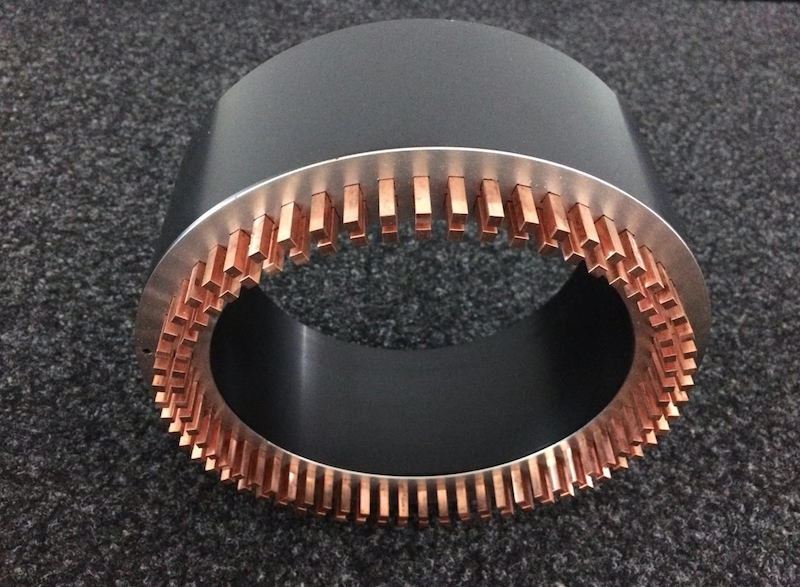 Just as with the FL-ARM laser, the advantage of beam wobble is that it enables more precise control over the temperature dynamics of the melt pool. Specifically, moving the beam rapidly and iteratively over the part, and not allowing it to dwell on any one place, essentially preheats the part in a highly controlled way, rather than dumping all the power in at once, and makes the beam effectively larger without reducing the effective power. All this stabilises the melt pool, reducing spatter, defects and weld porosity as compared to traditional laser welding methods.

Coherent Rofin also offers practical, process-related tools that improve results in laser hairpin welding in a production environment. For example, the company can supply a laser welding subsystem that includes a visual system to control the relative positioning of the focused laser beam and the pins.

In conclusion, developing and implementing a successful laser production process involves exploring a portfolio of parameters, settings and techniques that will ultimately deliver the best welding results.Coherent Rofin has both the expertise and resources to perform the development work required to identify these various elements. Furthermore,Coherent Rofin can integrate all the required functionality (beam wobble of FL-ARM profiles, process monitoring, etc.) into a single subsystem, which is controlled through one graphical user interface (GUI).

The ability to essentially purchase a total laser welding process, rather than assemble it in pieces, eliminates much of the deployment latency that can occur when an integrator assembles a system and finds that various elements in it fail to work together successfully.