Complex parts, precision fits, no margin for error; it’s no wonder automation is such a vital ingredient of successful powertrain assembly lines 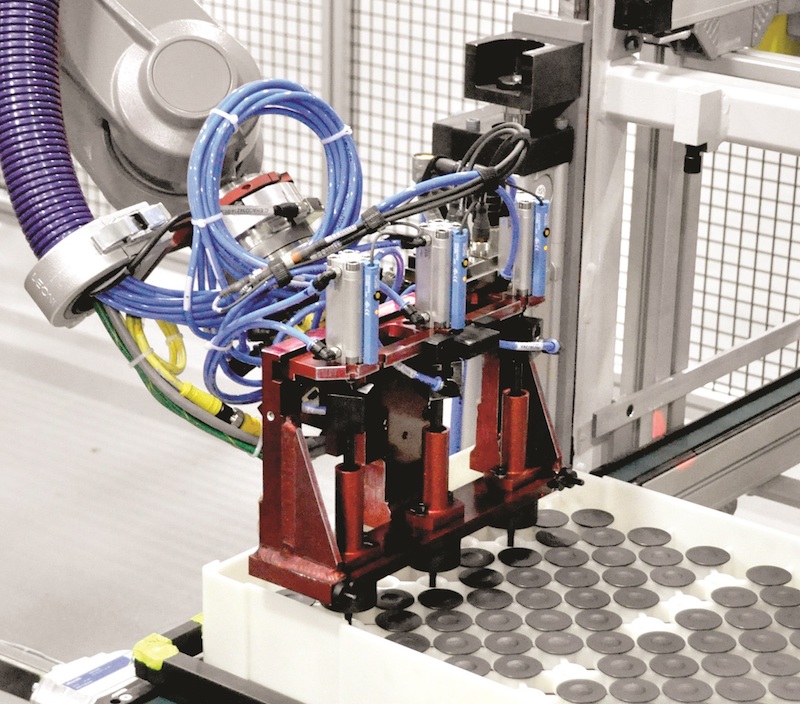 Modern lines are faster, safer and more reliable than ever before, thanks in large part to automation. While intensive, dedicated lines designed for high-volume throughput were the preserve of the 20th century, more recent years have seen flexibility added to the mix of desirables. Exemplifying this philosophy, ABB Powertrain Robot Systems and Ford Powertrain Manufacturing Engineering have recently completed the joint development of an advanced flexible cylinder head assembly (FCHA) system.

Flexible cylinder head assemblyThe ABB FCHA design improves upon traditional serial assembly systems by allowing multiple cylinder head architectures to be assembled simultaneously, without the need for time-consuming and production-halting changeovers. This technology provides a modular and flexible platform based on parallel processing that minimises and, in many instances, eliminates the use of dedicated stations. Importantly, the system incorporates redundancy for critical operations and allows production volumes to be easily adjusted, as required.

A complete FCHA system features 15 ABB robots comprising four different medium- and high-payload six-axis models. Certain modules within the system can be integrated into existing, traditional cylinder head assembly stations, such as those for the installation of plugs, sealer dispensing, valve-train assembly and testing.

For example, a stainless steel QC-11 tool changer, with its small size and axial air ports, is critical to achieving 110mm of minimum spacing on the adjustable pitch 20kN servo press. This allows the FCHA system to press two parts at a time, saving cycle time and reducing the number of machines required to meet Ford’s cycle time requirements. ATI developed a small, compact tool-ID module for the QC-11, providing a unique identifier to each press tool.

ATI’s Omega 85 six-axis force/torque sensor is also a key component of the system, providing the ability to install valve stems with minimum force. The sensor measures all six components of force and torque, sending accurate information to the robot. This functionality allows the robot to virtually ‘feel’ the part and react appropriately to the force, increasing its precision and minimising any potential part damage.

The first four FCHA systems are now bound for Ford engine plants in the USA, Canada and Mexico. Ford has designated the system as an internal bill of process (BOP), establishing it as the new design standard for all cylinder head assembly lines installed at the company’s engine manufacturing plants. 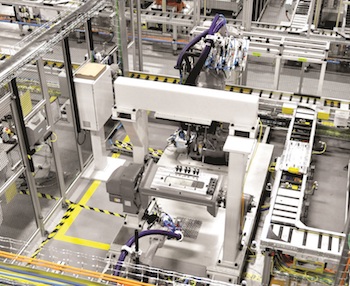 Simultaneous design of product and lineRetaining the powertrain assembly theme, but this time in South America, Comau says it has created a new engine line for Fiat Chrysler Automobiles (FCA) in Brazil with the capacity to produce 400,000 units a year. Designed to suit the Firefly global family of engines used in the new Fiat Uno and Fiat Mobi, the line is installed at the company’s Betim plant.

The first stage of the project consisted of a simultaneous engineering process in which Comau and FCA professionals from both Brazil and Italy defined the manufacturing process, as well as the concepts behind the assembly line, its stations and equipment. Comau then began designing the equipment needed for the line. Technical experts and engineers were involved at this stage, in addition to automation suppliers.

According to the project manager of Comau Brasil, Eduardo Sousa, this was a highly unusual project. “The great challenge was to design the assembly line simultaneously with engine development,” he says. “The equipment had to be developed with maximum flexibility to absorb all the changes made to the product as the project proceeded.”

Supporting the demand for greater flexibility, the system allows the potential to assemble the line components in different positions, whereas in older lines these could only be applied in a certain position.

“Certainly it’s one of the largest projects ever made by Comau Brazil, which provides the high degree of automation needed to meet FCA’s new production requirements,” says Sousa. “In the installation phase, approximately 200 professionals, including programmers, mechanics, electricians and fluid power specialists, were involved in assembling and testing the equipment. We started with a clean floor and no accessories installed, but today the line is working continuously to meet the production needs of the customer.”

New technological standards for assembly unitThe success story is similar at Fichter Maschinen GmbH of Eichstetten, Germany, a specialist in assembly systems that has recently produced a highly complex assembly unit for an automotive supplier that it says represents new technological standards. At the logistical centrepiece of the installation are 10 Motoman handling robots and Yaskawa DX200 Twin controllers.

The assembly unit was required for the manufacture of an engine component in Transylvania, Romania, where the Yaskawa Motoman MH12 type robots link and automate 25 processing stations of the Fichter modular system.

Exacting customer requirements demanded process-reliable assembly of nine individual parts, each with several versions of five different modules, continuous traceability, autonomy of 30 minutes and operability of the system by only one employee. The decision to use robots for handling was made at an early stage because individual parts had to be rotationally mounted and turned. This was the only way to guarantee the required high degree of flexibility on account of the different variants. Also, a portal system was ruled out due to the limitation in unit length.

The majority of the robots deployed in the system are equipped with a twin gripper that in one cycle per station always removes an engine part and inserts another. Cycle time is 20 seconds.

Among the most important assembly processes of the fully automatic system are: servo motor-driven joining and crimping modules with force/path monitoring; greasing of individual engine parts with a weighing system for monitoring grease consumption; test stations for height, diameter, torque, concentricity and axial run-out; and marking and labelling. All individual parts are fed in by standardised systems from the Fichter modular system: BoxStore, StepStore, StackStore and SlideStore. Due to the complexity of the process, the system is additionally interlocked by a workpiece carrier system, the Fichter DuoFloor.

The Yaskawa DX200 Twin permits the co-ordination of two robots with up to 18 axes. Because each robot knows the position of its fellow robots, a ‘crash situation‘ is ruled out, while robot density in the assembly facility can be optimally exploited.

Fichter’s system is capable of the inspection and complete tracing of every component at any given time. Errors, should they occur, can thus be tracked and quickly remedied. For this purpose, great importance was attached to the integration of information and communication technology. As a result, end-to-end process data monitoring is used for the diagnosis and adjustment of assembly procedures, while remote maintenance is deployed for timely support and optimisation by the manufacturer.

Visual tag for heavy-duty engine buildOf course, effective automation takes many forms and guises, as Detroit, a subsidiary of Daimler Trucks North America, can vouch. Detroit produces heavy-duty commercial truck engines for customers such as Freightliner and Western Star. From its 3m sq.ft manufacturing plant, the company produces a new engine every 2.5 minutes.

Decades after the wide-scale introduction of KANBAN, paper build books and assembly instructions remain standard practice on the production floor at Detroit. The company’s engine manufacturing plant uses approximately 500 build books each day, printed offsite on a 48-hour lead time, with each book ranging from 45-60 pages. Sequencing is generally poor as there can be daily changes to the build requests. 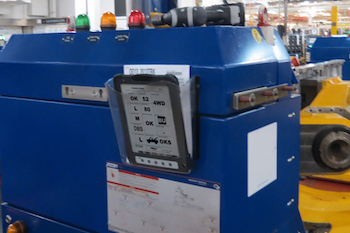 The challenge was to implement a system to monitor the movement of engines on the manufacturing floor and replace the build instructions. Detroit manufactures four engine models that differ based on fuel economy, horsepower and torque. For this reason, the company needed to create a more flexible manufacturing process to enable all models to be built on the same line.

Additionally, the chosen solution would have to work within the existing plant floor layout. Detroit can have upward of 90 AGVs moving through production with each carrying a different type of engine, so it is imperative that the build book replacement be able to associate each AGV with the specific type of engine it is carrying.

The chosen solution was Omni-ID’s ProView featuring the View 10 tag, a 10” visual tag with an electrophoretic display that can provide both text instructions as well as graphics. Here, RFID, infrared and WiFi communications technologies combine to drive real-time intelligence to operators.

Omni-ID’s operations team worked closely with Detroit, conducting site visits to understand software, hardware and process limitations, and uncover improvement opportunities. Tests were executed to determine the strength of the wireless network so that the tags could communicate their location, receive instructions and connect with existing production software.

View 10 tags are placed in the existing paper build book pockets on the AGVs and sit silent until they reach a designated station along the line where they receive the associated build book, based on the type of engine on that particular AGV. This concept enables Detroit to build multiple engine types, with multiple options and customisation, along the same manufacturing line.

As the engine progresses from station to station (as many as 55-60 stations of assembly), the work instructions are automatically advanced on the screen of the View 10. To ensure real-time accuracy, ProView software queries the Detroit system every 15 minutes to determine if a new build book has been uploaded. A major benefit of the View 10 is that real-time instruction updates can be made and communicated to the line — an impossibility with paper instructions.

Additionally, ProView offers a complete end-to-end process view, providing location tracking and reporting capability through every step of the build. When the engine build is complete, the instructions are deleted from the View 10 and it is ready to be redeployed and receive its next assignment. With more than 7m pieces of paper saved per year, ROI is expected in 12-18 months.

A new end-of-line dynamometer system has been commissioned at Ricardo’s UK engine assembly plant, providing a state-of-the-art test capability for some of the world’s most powerful production supercar engines. Marking the culmination of a 24 month, £2m investment, the test system has now been fully commissioned at Ricardo’s Shoreham Technical Centre. With a power and torque capacity exceeding 700kW and 900Nm respectively, the installation both increases the range of testing that can be carried out as part of the production process, while also offering high levels of automation to enhance productivity.

The system enables a production floor to test floor time of just 35 minutes. This includes the full 20-minute break-in and power pass-off (BIPO) test cycle which is carried out for every engine – up to and including the most powerful of products – assembled at the Ricardo engine plant. “The final part of a very significant expansion of our UK engine assembly plant, this new test system increases both our BIPO testing capacity and the power and torque range of the engines that we can test, including for conformity of production,” says Ricardo performance products MD Mark Barge. “As such, this automated plant is both more efficient and productive, as well as future-proofed to better meet the emerging requirements of our customers.”