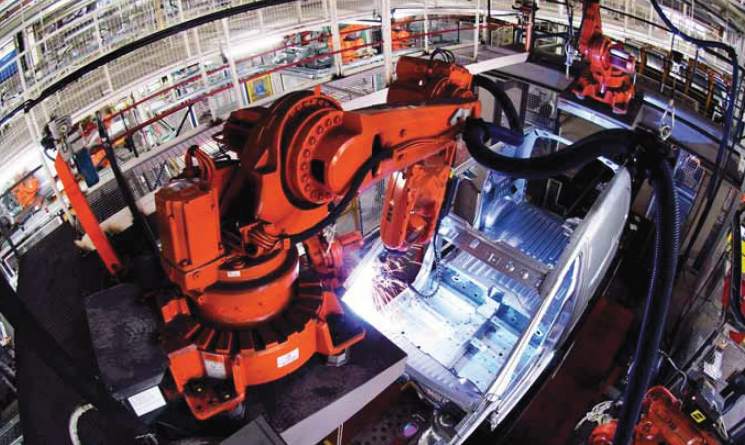 A wide range of recently-launched vehicles claim to have set new standards in joining innovation and efficiency, the improvements largely gained by using a combination of resistance spot welding and adhesive bonding techniques. While few manufacturers are prepared to release a precise breakdown of weld versus adhesive usage in BIW, those that do are generally the same manufacturers pushing the boundaries of what is achievable.

One such model is the BMW X6. Launched in 2008, the luxury crossover claimed a number of technological innovations in terms of its BIW construction. While these were marketed as making a significant contribution to BMW’s EfficientDynamics concept of reducing fuel consumption and emissions levels without affecting vehicle drivability, it was the mixed material concept and related joining techniques that resulted in the X6 BIW being able to achieve the required weight reductions without detracting from torsional stiffness or crash test performance. The resulting bodyshell incorporates nearly 117m of adhesive bonding and over 6,500 spot welds. In addition to these two main joining technologies, the X6 BIW also comprised over 8m of MIG welding and brazing, 82 selfpierce rivets and 53 clinched joints. What can be read into this kind of data? The numbers show that adhesive bonding is moving into the territory once dominated by spot welding. And yet, it is also clear that it cannot replace welding for all BIW applications. 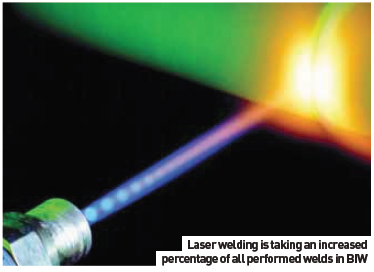 Focus on adhesive bonding
It is impossible to discuss BIW joining without considering the inroads being made by structural adhesive bonding. This innovative assembly technique has established a reputation for solving problems related to the cracking around spot welds that occurs as a result of fatigue loads. Essentially, adhesive allows stresses to be distributed across a greater area, lowering the stress concentration on spot welds. As a consequence, it is possible to reduce sheet component thickness without detriment to fatigue performance and, in turn, reduce the number of welding robots in the bodyshop. The use of adhesives also has a beneficial impact on noise, vibration and harshness (NVH), thanks largely to the ability of the adhesive to dampen airborne noise distribution. There are few reported drawbacks to the use of adhesive. Initially there were concerns about skin irritation for production line operators, but these can be avoided through robotic application. The BMW Mini production plant at Swindon is a well documented user of structural adhesive BIW joining.

Laser makes gains in BIW
Despite the positives, adhesive bonding finds itself not only competing with resistance spot welding but also laser welding. While not new, the technique is fast becoming a genuine alternative for BIW joining. In 2005, Volvo elected to use laser welding for the BIW of its C70 convertible, the joining technology used to attach the floor sill and A-pillar cover to the underlying A-pillar. Further, a connection between the upper portion of the A-pillar and the front header was made using a laser-brazed joint. Laser welding and laser brazing at Volvo take place in a separate, standalone cell sited in the main body shop line. This is the laser welding dilemma. Unless an emerging joining technology is capable of replacing a traditional technology in its entirety, then it is simply an additional, rather than a replacement, production process - hardly a formula for lean manufacturing. 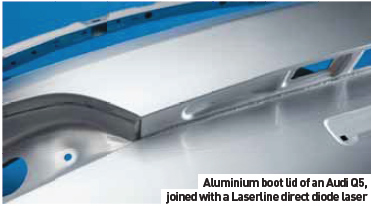 Yet despite this, OEMs are finding it hard to ignore the benefits of laser welding and adhesive bonding. The latter is taking a lead, but nearly all carmakers currently use laser welding for at least a small number of BIW processes. Some, such as VW, have embraced laser welding, with recent versions of the Golf featuring more than 70m of laser welds achieved using lamp-pumped Nd:YAG technology at its plants in Germany and Belgium. In the Wolfsburg factory, nearly 100 miles (120km) of laser welding is performed on more than 2,000 bodies over three shifts.

The obvious advantage of both adhesive bonding and laser welding is that each provides a continuous bond line, creating a larger area for load transfer between panels. This more significant load transfer area can offer improved crash performance, greater durability and improved torsion and bending stiffness. In turn, this makes it possible to reduce material thickness, reduce weight and boost fuel efficiency. Another reason behind the upsurge in laser welding is that only single-sided access is required to achieve the join, where as spot welding requires deployment of upper and lower electrodes. This paves the way for entirely new design solutions. Further advantages are created by the potential for ‘invisible’ joins, positioning the laser weld on the sheet edge to enhance the appearance of joins made in door, boot lid and tailgate areas.

Laser welding also requires smaller flanges than spot welding. Flange reduction, for example from 16mm to 6mm, is possible with correct design, further reducing weight and also serving to improve visibility. This can lead to greater volume for pillar, cantrail, and sill sections in confined spaces, again increasing stiffness and strength, the latter in part due to the continuous weld line.

The process of laser welding is quick, imparting less heat into the parent metal and reducing part distortion. But it’s not all good for laser welding. Relatively high investment costs for fully-equipped laser welding cells remain a sticking point, while tolerance requirements for parts and positioning are also tighter in comparison with spot welding. Repair issues also require additonal consideration.

Weapon of choice
One recent debate focuses on whether manufacturers should continue using lamp-pumped solid state lasers or replace them with diode-pumped disk lasers and diode lasers. “While lamp-pumped solid state lasers demonstrate about 3% efficiency, Trumpf TruDisk lasers achieve more than 25% and the Trumpf TruDiode, more than 35%,” explains Rüdiger Brockmann, Automotive Manager at Trumpf Laser Systems. “The possible savings in electricity usage alone are immense and could amount to tens of thousands of euros per laser, per year for a three-shift operation. “The cost benefits are preserved if you include the investment costs for the laser and accessories,” he continues. “Whether the disk or diode laser is better technology depends on the needs of the customer. Disk lasers have somewhat higher energy costs due to their lower efficiency by comparison with diode lasers. However, the disk laser is the more flexible tool because it can be used not only for welding and soldering, but also for remote welding and cutting.”

Together with the steel company ArcelorMittal, Trumpf has investigated the effect of weld seam geometry optimisation on the stability of advanced high strength steel assemblies. The Automotive Applications Research Centre at ArcelorMittal has shown laser welding can produce the widest variety of seam geometries without having to sacrifice production times. Resistance spot welding does not offer this freedom. The results of the study clearly speak in favour of the laser as a good complementary welding tool for high tensile steels with C- or S- shapes producing the best stability.

PSA Peugeot Citroën is using three Trumpf TruDisk 6002 lasers, as well as a TruDisk 4002, to weld the body of the Peugeot 3008. The disc lasers from Trumpf, with power ranges of 6 and 4kW, are used to weld the doors and body reinforcements at Peugeot’s assembly plant located in Sochaux, France. “Compared with conventional spot welds, full-length weld seams in car body manufacturing require less sheet folding and thickness, and save about 5kg of weight per vehicle,” says Jean-Charles Schmitt, Product and Process Laser Manager at PSA.

Using lasers, PSA could also increase the size of the rearquarter windows, improving visibility for the driver and the passengers. Such has been the success of laser welding that PSA Peugeot Citroën has recently announced it will be equipping its production sites with additional, nextgeneration TruDisk disk lasers over the next two years.

Another company promoting the rapidly advancing virtues of high power diode laser systems over lamppumped Nd:YAG systems is Laserline, which now offers 4000W diode lasers with a beam quality equivalent to Nd:YAG. Fibre delivered, the beam can be focused down to 0.6mm with a 200mm focusing length. Designed to support steel and aluminium welding processes, as well as fine cladding, all are within the abilities of the new generation of Laserline’s diode lasers.

Lasers with very high beam quality, such as fibre or disk lasers, may even be detrimental when it comes to bridging gaps or reaching a minimum weld width, says Laserline. According to the company, a small footprint, low maintenance and an efficiency of up to 45% translate into cost savings up to 10 times those offered by lamp-pumped YAG lasers. 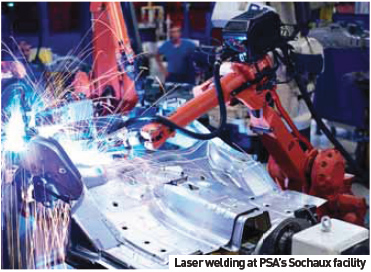 The next step for laser welding would appear to be ‘remote’ laser welding. Where conventional laser processing positions the work head close to the join, the remote version positions the weld head approximately 400mm from the workpiece, moving the beam with the help of mirrors. Combine this technique with an articulated robot and the process ultimately demands less tooling and around 30% floor space. Remote laser welding is also very versatile: it can produce butt, fillet and lap welds in materials including mild steel, high-strength steel, stainless steel, aluminium and magnesium. Some systems are also capable of welding materials that are galv-annealed, electroplated, hot-dipped galvanised or aluminised.

If it can be called a problem, an issue related to the speed of remote laser welding is that it can literally weld faster than parts can be loaded. With this in mind, it becomes necessary to look at the programme from various perspectives in order to take advantage of what the process can offer. For example, the full benefit of laser welding is not going to be gained if it is simply a matter of laser welding a part that's been designed for spot welding (e.g. with a flange that is bigger than necessary).

Considering the palette of available joining methods, it is easy to understand how problematic it can be for a manufacturing engineer to select the most suitable joining method for each application. With that in mind, a car body engineer typically has only three parameters – geometric shape, material and joining method – to address when choosing the appropriate joining technique. This explains why new assembly technologies continue to attract attention and are slowly gaining ground at the expense of more conventional welding techniques.