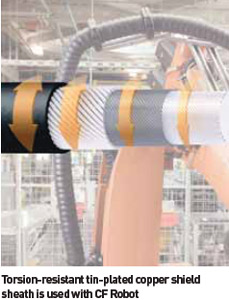 Igus has announced the introduction of a shielded robot cable for applications involving high levels of torsion. Chainfl ex CF Robot is designed for both robotic and non-robotic applications, such as rotary tables or spindle drives, that have to be supplied with high power levels.

In contrast to conventional braided copper shields, which are counter-wound, CF Robot uses a torsion-resistant tin-plated copper shield sheath. The torsional forces affecting the cable are largely absorbed by sliding and buffer elements between the sheath, shield and insulation, preventing early failure of the shield.

The outer sheath material is a high-grade, wearresistant TPE mixture. The twistable cable has been tested in the Igus technical centre through more than three million torsional movements to +/- 270 degrees.