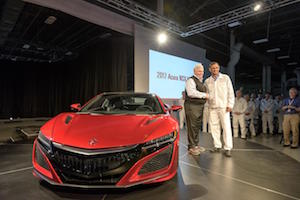 US – The initial series production vehicle rolled off the line at the recently opened Performance Manufacturing Center (PMC) at Marysville, Ohio, which is the exclusive location for the model. VIN 001 featured interwoven wheels, carbon-ceramic brake rotors, leather and Alcantera interior trim, plus carbon-fibre upgrades such as the engine cover, roof and rear decklid spoiler.

Clement D'Souza, engineering large project leader for the Acura NSX, commented that job one represented “the culmination of more than 30 years of manufacturing experience and expertise here in Ohio” and that major design and manufacturing innovations had been accomplished. Development of the 2017 Acura NSX involved a global team led by engineers at the Ohio Center of Honda R&D Americas, following a final design by the Acura Design Studio at Torrance, California, itself based on a concept from the Wako Studio, Japan.

Meanwhile, the PMC was designed to blend human skill with advanced technology in order to achieve superior build quality. The centre’s master technicians developed 12 patent-pending technologies and other methods for production of the made-to-order supercar. Innovations in bodyshop, paint, assembly and quality assurance include: fully automated metal inert gas welding of the aluminium-intensive space frame; 14 hours of manual assembly by a team of 16 technicians; and a dynamic performance testing process based on the company’s racing experience.

The 3.5-litre, twin-turbocharged V-6 engines powering the NSX are built at the nearby Anna plant, also in Ohio. Each engine is mated to a nine-speed, dual-clutch transmission and rear, direct-drive electric motor before being machine-balanced, bench-tested and broken-in to the equivalent of 150 miles of service. The engine is installed at the PMC together with the front-mounted Twin Motor Unit which enables electrically powered torque vectoring, claimed by Honda to be a world-first among sports cars. The OEM also says the NSX is the only supercar made in America.