Grand range of parts at Crewe

While a Bentley may be something more than the sum total of its parts, making sure those parts are engineered, regardless of model year, to the company’s exceptional standards is a priority for continued prestige

Buried deep within the bowels of the Bentley factory in Crewe is a small dark room containing priceless artefacts from a bygone age. Beautifully-fashioned dials and gauges, sturdy window-winder mechanisms, delicate pieces of trim, and even a massive rear-leaf spring with a dusty leather gaiter that makes it look as if could have come from Tutankhamen’s tomb, have been carefully laid to rest on tables. But this testament to a golden age of transport is no museum, it is but a tiny example of the countless parts and accessories for Bentley and Crewe-built Rolls-Royces manufactured as long ago as 1955.

The rear spring that would make the owner of a lopsided Bentley Mk 6 weep with joy is just one of almost seven million parts that Bentley can supply for cars made during the past 60 years. Tools, lost from a cherished vehicle through the years of ownership and many changes of hands, can also be replaced.

Although Rolls-Royce bought the bankrupt Bentley in 1931, production of the flying Bs at Crewe began in earnest in 1946. Remarkably, of the 151,000 or so cars built by Crewe since 1906, 75 per cent are still running according to the company (unofficially, the figure could be as high as 83 per cent, but Bentley prefers to err on the side of caution).

The company has close links with the 3,700 members of the Bentley Drivers Club and the 9,000 worldwide devotees of the Roll-Royce Enthusiasts Club.

What’s in a name

In 1998 Volkswagen paid $816m to Vickers for what was then Rolls-Royce Motor Cars, of which Bentley was a subsidiary. Its initial euphoria at acquiring a British institution was soon dampened by the subsequent realisation it had not bought the rights to the Rolls-Royce name; that was the property of Rolls-Royce plc, owner of the aero division and a company completely separate from the car-making unit. Rolls-Royce plc decided to sell the rights not to VW, but BMW, for a paltry $68m.

BMW magnanimously agreed to allow VW to continue to build cars at Crewe bearing the Rolls-Royce badge until 31 January 2002 while it constructed a factory at Goodwood to produce a ‘new’ Rolls-Royce.

Undeterred, VW forged ahead with its plan to drag Crewe and the Bentley marque in particular into the 21st century and has so far invested around $1 billion in the Cheshire site. But when Rolls-Royce moved to Goodwood in Sussex under the BMW banner, dealers became concerned about the supply of OE parts and accessories.

“Since Rolls-Royce is owned by BMW we can’t direct market to their dealers and so, to reassure them that Crewe would continue to make them available, in 2003 Bentley launched its ‘Crewe Genuine’ label, which has gone down very well,” says Bentley’s Aftersales Operations Director Mike Morris. “Parts are distributed through our dealers and they in turn supply to the 30 or so major independents specialising in the marque in the UK, while they also sell to an additional four that are wholesaler-only outlets.” 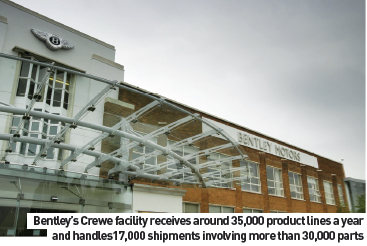 Morris’s 64-strong team provides parts and accessories for Bentley and Crewe-built vehicles sold through 160 dealers in 43 countries; 24 of those dealers are in the UK. “A commitment to customer service is at the heart of Bentley’s success and our customer base is unique,” he claims.

In addition to the Crewe facility, a satellite parts and accessories warehouse operates in Kentucky to handle the all-important US market. “There, an order placed on a Monday can be processed by Crewe and on a flight the next day, arriving on the Wednesday,” says Head of Parts and Accessories Steve Rhodes.

Parts for new cars account for 40 per cent of a parts business for Bentley that has a dealer net value of around $100m a year.

The US and the UK each accounts for 31 per cent of demand, with Europe taking some 24 per cent and the remainder going to the rest of the world. “Effective planning and forecasting is crucial in ensuring that such a wide range of parts is readily available,” continues Rhodes. “Our Crewe facility receives around 35,000 product lines a year and we handle 17,000 shipments involving more than 30,000 parts.

“We currently respond to over 95 per cent of enquiries within 24 hours and our aim is not simply to maintain this figure but improve it,” he says.

Equipment suppliers to Bentley at Crewe:

Vehicles manufactured before 1955 are supported by London dealer Jack Barclay – which has access to 5,000 product lines covering 500,000 part numbers – but Crewe also has another card up its sleeve in the form of a programme called ‘Price and Application’.

This is the ‘court of last appeal’ for distraught owners seeking parts no longer in stock. For if the original blueprints and technical specification can be located within Bentley’s files, modern computer-controlled production techniques mean the part or component can be produced to aircraft-spec accuracy, usually by one of a handful of specialists that the company uses.

For one-offs or very short runs, the cost is, as one would expect, “significant”.

“The take-up by customers interested in this service is quite small, less than 10 per cent,” concedes Morris, who claims Bentley has achieved a parts penetration figure of more than 80 per cent, with a first parts’ pick of 94 per cent.

Bentley has also boosted its stock of spare parts over the years by buying up suppliers and their stock. For example, it has acquired around 1,000 sets of complete body panel sets for Rolls-Royce Spirit, which have a combined retail value of £15m ($20.5m). 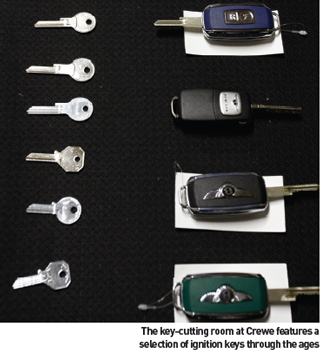 Key to the past

Along the same corridor as the ‘Aladdin’s Cave’ of parts from the past, is the key-cutting room, where a selection of “ignition keys through the ages” reveals that early post-war ones resemble those used to open domestic front doors.

Like the keys, the equipment used now to re-cut replacement ones spans the ages, too, ranging from a system that wouldn’t look out of place in a high-street locksmith (though, of course, in this instance there is no original outline available to copy), to a piece of equipment straight out of Star Wars, where the whole operation is completed automatically.

Rhodes explains: “We need to have several key-cutting machines available so that we can cut a key on the same equipment that was used to make the original. A key’s data is obtained from the vehicle’s chassis number and, of course, there are many stringent security checks carried out to satisfy ourselves that we are dealing with the genuine owner of the vehicle.”

But one last question to Morris and his team. Is the story true about the Rolls-Royce owner who attempted to pay the company for replacing his Silver Cloud’s back axle when he was holiday and who was told: “Sir, you must be mistaken, Rolls-Royce cars never break down…”.

Morris just smiles and tries to change the subject: “I’m not really sure but there was that time when a BA flight was held on the tarmac at Heathrow because we had to get a replacement windscreen on it for the Queen’s Bentley.”