While F1 snobs in Europe may turn up their noses, a lot can be learned from the popular US-based NASCAR series. Charlie Bamber, Managing Director of Oxfordshire-based MCT takes the alternative view

NASCAR is often looked down upon by European motorsport automotive industry insiders. A perceived world of technical stagnation seems a million miles away from the technologically-advanced and corporate environment that is F1 and other international, Europeanbased, motorsport series. But take a closer look and you’ll find a world of innovation and technical complexity.

NASCAR continues to draw in the numbers, not just in the grandstands but also in terms of new sponsors.

And that’s because companies can see a return for their investment. It’s easier for a NASCAR team to approach a far wider group of sponsors than is possible in Europe, due to the scale of the series. Indeed, there are almost certainly twice as many people watching NASCAR within a family as most other series because it appeals to both genders, rather than just being essentially a male preserve. Such audiences (and therefore sponsors) are attracted by the close racing and the colourful personalities involved. Corporate-speak is from another world, it seems. So, it’s a show – and a very colourful, accessible show. But it’s also an unheralded show of technology.

Necessity is the mother of invention 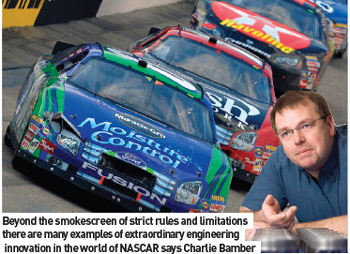 If one looks at a NASCAR engine, and beyond the smokescreen of strict rules and limitations, there are numerous examples of extraordinary innovation and complexity. Indeed, there are areas in the engine where the development of parts is more complex than F1. For example, an F1 camshaft acts directly on the valves. Due to the original freedom of F1 regulations, simplicity has been engineered through system-based design. So, the challenge for a valve to work in an environment operating at 22,000 rpm is in fact a relatively simple one.

In contrast, the restrictions from NASCAR mean that the systems utilised, in order to reach the required speed, are extremely complex. The NASCAR valve, while operating at only half the speed of an F1 engine, has a mass and system complexity of at least five times that of its F1 rival. So, from camshaft to valve, the engineering of the system is a far more intricate piece of work than the F1 equivalent.

Other examples abound of how NASCAR technical restrictions lead to innovation. For instance, F1 engines have an electronic fuel system, which allows the freedom to run any fuel to air mixture, to any cylinder, at any moment.

Yet, with a NASCAR engine’s carburettors, the operating environment is massively intricate, due to the regulations. For instance, the acoustic effects of the stock inlet manifold have increased complexity of the engineering of specific components.

Beyond the cutting edge

Recently, MCT patented an F1 intake manifold system that has proved to be extremely successful. Yet, the CFD processes that were used to develop the system are unable to optimise the design of a ‘simple’ NASCAR-style intake manifold because of the complexity of the overlapping pressure waves present beneath the carburettor in a stock aluminium system. To fully exploit this manifold, technology beyond that at the cutting edge of current F1 thinking would need to be exploited. Yet, the iterative processes employed by NASCAR teams over many years have successfully developed this stock aluminium manifold beyond what current F1 technology is able to deliver.

The argument that F1 technology and European thinking is ahead of North American stock car racing is a flawed one. Indeed, anybody from an F1 environment who believes that their technology is unique, and that they could step into a NASCAR garage and immediately make a difference, is woefully wide of the mark.

We know that North America can teach us about extremely successful sporting and commercial packages. Packed grandstands across the country week in, week out, tell us as much. Yet to that should be added component level technology, cost control and the longevity of relationships with the vehicle manufacturers. Europe should sit up and take notice – the North American motorsport sector can teach us a lot.