GE imagination at work in China

Joint venture Shanghai GM has chosen GE to implement a turnkey communication and control system at its plant in Pudong, China

Not every facility has the luxury of designing a production control system from the ground up. The majority of OEMs and suppliers have plants with legacy production and control systems that are upgraded piecemeal.

Outmoded controllers often running on proprietary networks mean that production control is often carried out in islands of automation rather than with a holistic view.

So when presented with the opportunity to build a control system from scratch, GE ensured that the system it implemented at its production facility in the Pudong area of Shanghai was as integrated as the market could offer. But first a few words about the huge facility itself and the myriad of process that the system would control.

The 38,000 square metres powertrain shop manufactures five major engine components for 4 and 6-cylinder engines that are used on its engine assembly line. This assembly line can produce the mix of 4 and 6-cylinder engines required for the vehicles SGM produces, as well as for other vehicle manufacturers in China. It also produces five major components for, and assembles, the first automatic transmission used on a production car built in China. 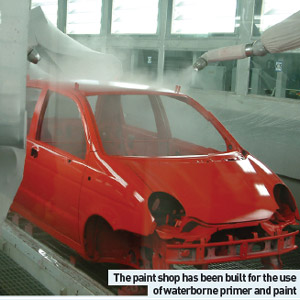 In the 24,700square metres body shop, heavy parts are lifted and moved by manipulators while 44 robots perform quality-sensitive tasks such as welding and sealing. The shop has agile tooling and a programmable design in the framing station that allows it to produce bodies for two completely different vehicles. An Electrified Monorail System (EMS) in the underbody sub-assembly and body side sub-assembly areas maximises the flexibility of model mixing in the production schedule.

Before the first Buick rolled off the line SGM selected GE to unlock a $65m turnkey communication and control and power distribution system, as well as provide process equipment and support that would actively support GM’s production practices.

For its part, GE Fanuc developed a $15m communication and control system guided by its Cimplicity enterprise-wide software and supported by GE Fanuc Series 90-70 and Series 90-30 PLCs, Microsoft Windows NT, and Intel-based server and workstation computers. Four subsystems are connected by an Ethernet network to monitor and control the five shops: the Process Monitoring & Control (PMC) System, the Target Control System (TCS), the Automatic Vehicle Identification (AVI) System, and the Andon System.

With thousands of machines and miles of conveyor systems, the automation solution effectively minimises idle equipment and personnel, maximises uptime and productivity, and operates seamlessly within the broader scope of the GE framework. 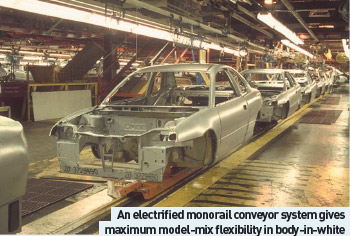 To support troubleshooting and repair efforts, the system quickly detects equipment and production problems, immediately notifies the appropriate maintenance team, production manager, or process support engineer, and provides diagnostic data for speedy repair efforts. Essential to a facility of this size, the PMC system minimises production downtime that can result from mechanical or production-related problems.

The TCS controls the movement of vehicle bodies into and out of the body distribution centre using several modes of operation from fully automatic to fully manual. Like the PMC system, the TCS also employs Cimplicity software, but with the added feature of Tracker – an option that provides tracking and routing control of the serialised vehicle bodies as they move through the production process.

With Tracker, GM can dynamically collect and store a variety of vehicle body data, including process parameters, time stamps, and quality measurements. Operators can easily determine the location of a tracked vehicle body, display its data, and provide control commands to production equipment to process and route the body. Communication to the plant’s Automatic Vehicle Identification (AVI) system and conveyor controls are supported over the plant Ethernet network.

In addition to tracking vehicle bodies, it determines where to store vehicle bodies arriving from the body shop, sequences vehicle bodies into the paint shop, decides where to store vehicle bodies returning from the paint shop, and again sequences vehicle bodies into general assembly. The TCS and similar routing control systems are used extensively in automotive facilities to efficiently and effectively control vehicle flow based on parameters such as production schedule, optimum colour blocking, consistent load balancing, and material availability. For GM, the TCS effectively optimises production flow and productivity and, due to its efficiency, minimises paint costs and reduces paint emissions.

The plant’s AVI system identifies and tracks vehicles in the body shop, paint shop, and general assembly shop. Vehicles are identified by writing vehicle identification and configuration data to radio frequency (RF) tags mounted on each vehicle carrier. Vehicles are tracked by reading the vehicle data from the RF tags as they move through the production process.

There are two independent AVI systems: one is for the body shop and body distribution centre (BDC), and the other is for the paint shop. The body shop/BDC system consists of one GE Fanuc Series 90-70 PLC networked with eight tag read/write stations located in the body shop, body distribution centre and paint shop exit. Two of the stations in the body shop have automatic bar code scanners that read data from a label affixed to the body so that it can be uniquely identified by the AVI system when it enters the production stream.

Each AVI system also communicates directly with the TCS and SGM’s FLEX system via the Ethernet network, reporting vehicle locations and vehicle data to both. The AVI system also receives data from the FLEX system for storage on the RF tags. This data is read from the tags by other systems and is used for controlling the production process. 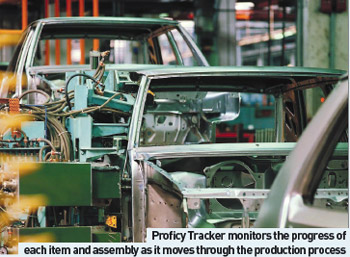 The Quality and Material Andon System consists of two similar but separate subsystems. The Quality subsystem enables factory personnel to request help when a product or process quality problem is identified. Help is requested by pulling cords located along the production line. The action of pulling a cord sends a signal back to the operator interface, illuminating a section of a large Andon board that indicates where the problem exists along the production line. The Quality subsystem supports the synchronous manufacturing principles of producing quality products utilising in-station repair rather than final process repair.

The Material subsystem allows each production area to automatically or manually request material before inventory is completely consumed. Factory personnel manually request more material by pressing a button. Sensors that detect a minimum inventory level can also request material automatically. The manual or automatic request sends a signal back to the Material System, which displays the request in the material storage area. Fork truck drivers then deliver the requested material to the location, again supporting the synchronous manufacturing principles of just-in-time delivery.

Both the Quality and Material systems feature builtin tracking and reporting capability that compiles the number of calls, the number of line stops, and the resulting downtime.

Problems are detected and resolved quickly and inventory is minimised. As with the PMC and TCS, the Andon system avoids the high cost of idle equipment and people due to production problems and drastically reduces the opportunity for poor quality and rework.

Another company was able to look at production control anew, but this time with a specific aim in mind; avoiding penalties for late delivery. The installation at a major automotive supplier again featured GE’s software, but on this occasion the Proficy Tracker solution was used in isolation to avoid the costs related to late and out-of sequence delivery penalties. In fact, the company has never shipped out of sequence under the production management system, which has helped to put this complex Greenfield on the road to success.

The company, who declined to be named, is a major automotive Tier One supplier that manufactures components and serialised assemblies for automotive end users worldwide and recently faced production and delivery challenges at a Greenfield site that would have been unimaginable to Henry Ford and his suppliers.

In order to meet stringent regulatory and customer quality requirements, the supplier needed an error-proof method for following a unit through multiple stages of assembly and testing, and creating a comprehensive history for each unit produced. Capturing all of this real-time data flawlessly and sequentially would be a difficult enough task in and of itself, but, to add to the complexity of the application, the lead time between manufacturing and delivery is a mere 120 minutes. For each assembly delivered late or out of sequence, the supplier is penalised $6,000. With production running at one unit per minute, the company needed to avoid potential penalties totalling $360,000 per hour.

To ensure this plant got into gear quickly, the manufacturer contacted GE Fanuc to determine whether there was a solution that would meet its production needs – and could be implemented within a tight 13-week schedule for design and implementation. In addition, the manufacturer was looking for a solution that would be as cost effective as possible over both the short and long term, and, as a result, specified a COTS-based system for which replacement parts are widely and readily available. 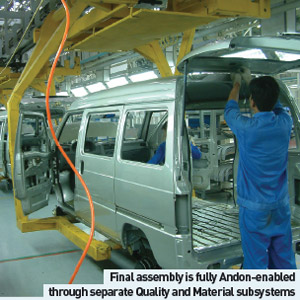 The heart of the solution is Proficy Tracker, which monitors the progress of each serialised item that moves through the production process. It provides the detailed, continuous flow of information needed for optimising the manufacturing process, while enabling the manufacturer to manage inventory levels and locations, and route materials efficiently and effectively to maintain the build sequence.

The solution provides the manufacturer with extensive capabilities, including: maintaining the build sequence through automated routing; providing option build data to assembly stations; manifest printing to provide option build data to operators at stations; tracking unit serial numbers from one assembly station to the next; counting produced and rejected units; monitoring and routing re-work; collecting product and process data associated with serialised parts; a shipping management function verifying that the operator loaded the product on racks in the correct sequence for transferring them to a truck, and for subsequent delivery to the end user; a document management function for rack loading and another for manual backup on the assembly racks; and an error proofing function consisting of “pick to light” and bar code verification of parts being assembled at each station.