General Motors’ Ellesmere Port facility manufactures the Astra model for a variety of markets, badged Vauxhall, Opel, Holden and Chevrolet. One of the defining features of the plant is its vertical integration – more than 50% of body parts, including mouldings, are manufactured on-site. Also, the plant has an exemplary standard of work safety.

Another GM characteristic is the high demand made on investments in new manufacturing technology, in that any new equipment must have paid for itself within a year, with new thermal joining systems offering an insight into how these criteria are fulfilled. Based on the innovative CMT process from Fronius, the bodywork specialists at Vauxhall have developed solutions for reliably welding door hinge flanges and the high-quality brazing of vehicle floor and side body parts.

The best Astra quality in Europe

The Ellesmere Port plant is located in the UK, beneficial as the country ranks second only to Germany in total sales for GM Europe. The Astra and Astra Van are manufactured in a two-shift system. Pete Roberts, Chief Body Shop Welding Engineer tends to talk in superlatives when it comes to his workplace in the large, listed workshop buildings. “Up to 130,000 vehicles come off the production line every year, making us GM’s most efficient bodywork production line in Western Europe. We are also the second largest automotive manufacturer in England. We are producing the best Astra quality in Europe – this is backed up by the feedback from warranty claims made by our customers.”

The innovative CMT process and its benefits

Perfect digital process control is the prerequisite for the CMT process. It ‘detects’ a short circuit and assists droplet detachment of the filler metal using a characteristic reversing wire movement. The material transfer requires practically no current and takes place while the wire is being retracted, which breaks the arc, producing the typical ‘hot-coldhot- cold’ pattern in a maximum 90Hz cycle. Heat is applied to the metal during the short burn phase (hot). In the retract phase (cold), precisely one drop enters the resulting weld seam or weld pool, resulting in virtually no spatter, less rework, no weld pool, less distortion and improved gap bridge ability.

In practice, the benefits come into play when welding thin (CrNi) steels and aluminium sheets, joining heavy and light-gauge sheets, or steel to aluminium, and when brazing difficult joins.

Ray Price, Technical Manager in the Body Shop, is also proud of the company’s record in the safety at work ‘performance discipline’. He explains: “We have retained our number one status; out of 14 million work hours, only one day is lost due to accident. This means that for the last three years none of our 2,500 employees have been involved in an accident at work. We are the safest GM workshop in the world.”

Pete Roberts explains further: “It takes between 23 and 24 hours for a finished vehicle to come off our production line. Our area of expertise is the assembly of the body from galvanised steel plates that are compression moulded here at the Ellesmere Port site. Some parts are made of high strength TRIP (Transformation Induced Plasticity) steel plates.”

Thermal joining is the key technology. “We have to focus specifically on quality risks and problems that impede productivity – fixing them as far as possible,” explains Roberts. He gives the example of a typical task that needs to be fulfilled on the rear of the Astra Van body. “Galvanized steel sheets, 0.8mm thick, have to be joined to high-strength TRIP steel. While we normally use spot welding, which has minimal impact on the materials, it cannot be used in this instance because the gap between the overlapping metal parts or between sheets with large radii is too high relative to the high electrode wear.”

The welding experts initially opted for an arc welding solution. However, this produced excessive spatter. Another undesired side effect was increased warping of the material due to the high heat input – causing the spatter to spread over an even wider area. In addition, the galvanised layer partially vaporised, removing the corrosion protection around the weld site while time was also lost due to production being interrupted at least once on every shift as a result of irregularities in the torch nozzles and the wirefeed.

The consequences of all this for Vauxhall were that one specialist needed to be deployed on the production line solely to check parts for shape non-conformities and for the rework required - including spatter removal. This amounted to EUR50,000 per shift in annual labour costs - double that when you take the two-shift system into account.

On a visit to the Opel plant in Bochum, Roberts saw initial steps being taken towards solving a similar problem.

Workers at Bochum would bridge unusually large gaps on the bodywork floor of the Opel Astra and Zafira using CMT (Cold Metal Transfer) brazing. In doing so, the zinc-plating is protected since the ‘colder’ process causes less warping of the material while still creating a successful join. In addition, little or no spatter was produced, meaning a cleaning cloth was all that was needed. As a result, the cycle time had been reduced from 50 to 40 seconds. “We adopted the solution using CMT and adapted the application for our welding operations on the vehicle floor and side plates”, reports Roberts. They are now bridging relatively wide gaps and achieving a secure join using automated CMT brazing. 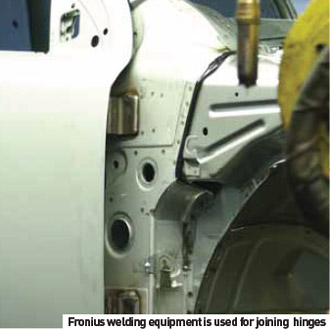 The CMT brazing solution simultaneously resolves several problems for Vauxhall. Rework costs have been completely eliminated. Faults that previously occurred due to interruptions in wirefeeding have been eliminated. The torch nozzles that were subject to high levels of wear (needing to be replaced one or two times per shift) now work for one and a half years in two-shift operation. Engineers save on spare parts and the space previously used for their equipment has been freed up. The production area that was reserved solely for the extensive work of testing and correction is no longer required – while the same applies to the procedures requiring sensitive metal surfaces to be protected from welding spatter. For example, the threaded holes in the area of the joins had to be carefully covered to prevent stray spatter particles from sticking the liquid metal particles. The fact that a protective cover no longer needed to be used saveed a full four seconds per cycle for users.

“All the process benefits from the automated use of the four Fronius TPS 3200 CMTs for brazing on the vehicle floor and side bodywork adds up to a dramatic increase in mean time between failures (MTBF) compared to the previous short arc application”, states Technical Manager Ray Price. In fact, the MTBF has actually increased by up to 20 times, as downtime due to faults has dropped from two per shift to one per (two-shift) working week.

The visit to Bochum also revealed another use for the Fronius TPS 3200 CMT, where engineers were using the process to bridge wedge-shaped gaps from zero to 3mm wide between the vehicle body and the door hinge flange. Creating a secure MAG join in this location had been a task for only the most skilled manual welder, as both the gap and the difference in sheetmetal thickness (0.8mm joining to a 6mm door hinge flange) added to the problem.

The reduced heat input of the cold CMT process avoided warping the material, avoiding corrective rework, while the job has been reliably automated.

The Ellesmere Port plant was also experiencing a productivity bottleneck at the door stage. Before the visit to Bochum, the joins were being made using both manual and MIG (metal inert gas) welding, accomplished by robot.

But while the 0.8 mm diameter welding wire made a secure weld under the argon CO2 shielding gas, spatter would stick in visible areas around the door, which required time consuming grinding to remove. The main disadvantage, though, was the slow robotic welding, that could only complete four of the required six joins within the cycle.

To solve this, Roberts’ team incorporated a Fronius TransPuls Synergic CMT system. With robots holding the door and precisely positioned hinge in place, the welding robot sets the clean, virtually spatter-free high-quality seams. They now perform six seams within the cycle time instead of four, allowing a welder enough time to create the weld seam on the inside of the door where the robot cannot reach. This process also compensates for tolerances of the body and door components caused by the manufacturing process.

Resolving the bottleneck at the door stage was only one of the benefits gained by the automotive engineers in Ellesmere Port through employing the Fronius systems. “The costs of wire and shielding gas have dropped significantly,” says Roberts. “This is because we are now using a 1.2mm diameter wire instead of a 0.8mm wire. This type of wire is cheaper and, due to the improved deposition rate that can be achieved, it contributes to time savings. The shielding gas made of pure CO2 that we are now using costs half of what we were paying for the argon mix. We are saving more than £20,000 annually just from the argon.”