India robotics player The Hi-Tech Robotic Systemz Ltd. is plotting a revolution in mobile assembly modules that in future could mean the assembly line comes to you. Technology writer Ruari McCallion catches up with the company’s founder and MD, Anuj Kapuria 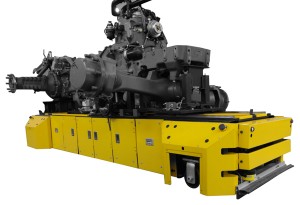 The idea behind The Hi-Tech Robotic Systemz Ltd., a growing part of India’s Hi-Tech Group, first dawned in the United States. Founder and director Anuj Kapuria was following his engineering degree from a British university with a master’s degree at Carnegie Mellon University when he joined a team that entered a vehicle in the Defense Advanced Research Projects Agency Grand Challenge. Competitors were tasked with designing and building vehicles that could autonomously navigate a 142-mile route across the Nevada desert.

“We were the first of the losers,” Anuj Kapuria laughs. No vehicles completed the route but the Carnegie Mellon project got the furthest – 7.5 miles. Undeterred, the organisers and teams came back 18 months later and had another go at the remaining 95 per cent of the route. Carnegie Mellon was first among the losers again, but this time they completed the course.

“I worked a lot on unmanned vehicles and unmanned systems, including components such as vision sensors,” Kapuria reflects. “When I came back to India and joined HiTech, I had a list of 150 ideas. We started working on a smaller number – 10 – and five of them have now seen the light of day with our customers.”

India automates
It is difficult to be certain about the total number of industrial robots currently in use in India. According to the International Federation of Robotics, robot installations in India reached a new peak of around 1900 units in 2013 (Germany had around 18,000), but that number and any claimed cumulative total will be misleading, Kapuria argues, because it does not include refurbished robots.

“Whatever the number, the application landscape is pretty familiar: something like 70% of India’s industrial robots are used in welding applications. The figure is much the same as for the rest of the world. Demand will grow as the country moves beyond the cheap-labour phase and begins to compete effectively on the world stage. We are suppliers to a global market and in order to do that successfully we need to achieve a higher level of quality.”

The Hi-Tech chief continues: “Automation is a common route to high standards of quality, reliability and consistency, and robotics is now starting to make more sense to industry. India has, historically, taken a frugal approach and is being intelligent about it: you don’t use robots just because you can. But if they offer gains that are more attractive than a low-wage approach, people will invest in robotics.”

"The entire material flow under this system enables you to see how much inventory you have in the factory, in real time" - Anuj Kapuria, MD, The Hi-Tech Robotic Systemz Ltd.

Tackling obstacles to growth
Rising wage pressures, worsening industrial relations and the aspirations of India’s burgeoning middle classes are also part of the mix. But the fact that automation lags behind much of the industrialised world could be to India’s advantage, if only because it gives India the option of going straight to more advanced robotic solutions.

“We were just having this discussion within the company,” Kapuria says. “It’s a generational shift and we are seeing leapfrogging.” But he does not believe that India will be able to leapfrog its way over obstacles such as the need for infrastructure as China has. India’s model of parliamentary democracy rules out the Chinese option of central planning – simply because everyone in India can have a say and usually makes sure that they get it.

Although the country’s bureaucracy and mountains of red tape are notorious, more positively, India has a strong legal framework for protecting intellectual property. Not to be left out, Hi-Tech Robotics has filed a number of patents of its own. “We see IP as the driver for growth in our country. If you don’t have the intellectual capacity, you don’t have the opportunity for growth,” says Kapuria.

Parent company Hi-Tech Group was founded over 25 years ago and includes Hi-Tech Gears, which manufactures and supplies transmission gears and shafts, timing gears and precision machined parts for OEMs and other customers. Other group companies include Hi-Tech Engineering Systems, Pvt, Ltd, Hi-Tech e Soft, and Vulcan Electro Control Pvt, Ltd. The latter is a machine refurbishing and automation facility.

In addition to the four-wheeled segment, India has a fast-growing two-wheel motorised transport sector, which should not be underestimated. It reflects and emphasises a uniquely Indian requirement: the automotive manufacturing industry’s need for lower-cost solutions. A conventional manufacturing or assembly plant represents a major capital investment and anything that can reduce costs while improving efficiency and effectiveness is attractive. 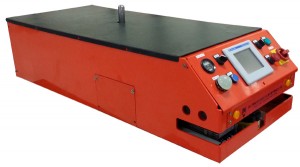 Tunnelling AGV: optimising the manufacturing and assembly-line process
Low-cost, flexible solutions
“We have come up with low-cost hardware that can be applied on the factory floor,” Kapuria explains. Hi-Tech Robotics offers a range of products to automate the warehouse function and improve inventory management. Mr Kapuria also notes that there are manufacturers who might not know how much they have in their inventory and stores. He believes that Hi-Tech Robotics’ equipment can help to boost productivity by as much as 50% for a relatively low capital outlay.

He is quick to drill down into the detail: “The system uses lean manufacturing ‘pull’ ideas as the backbone, seeking to ensure there is no excess inventory. As soon as material enters the warehouse, it goes into a modified automated storage and retrieval system (ASRS). All in-plant stores are managed by our transport bots, with some manual intervention – chiefly, making sure that stores are placed where our bots can retrieve them.”

An ASRS typically uses a roof-mounted system, which is both expensive and inflexible. The Hi-Tech Robotics chief also notes the advantage of autonomous guided vehicles – from flexibility to the ability to right size.

“Fixed systems involve a lot of upfront costs. If you want an ASRS that can cope with ‘X’ number of parts – production levels in three or five years, say – you cannot ramp up to that. You have to deploy it immediately,” he notes. “It is also vulnerable to failure, because if one thing goes wrong, the whole system can be interrupted. Our mobile bots work on the floor – they don’t need a fixed infrastructure. 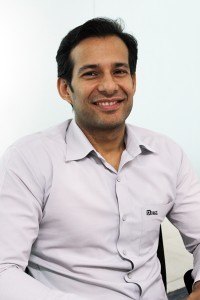 Anuj Kapuria, MD, The Hi-Tech Robotic Systemz Ltd.
“Users can start with what they require now and scale up as their needs increase. They can climb ‘intelligent’ racks, pick material and come back out. There is no single point of vulnerability, because even if a number of bots fail, the others can carry on. A warehouse bot will fill a trolley with items for production. A second will take the trolley to the production line. After assembly, a third takes output to finished goods.

“The entire material flow under this system enables you to see how much inventory you have in the factory, in real time,” Kapuria adds. “That includes goods inwards, warehouse stock, work in progress and finished goods. It has helped achieve leaps in efficiency, including claimed return on investment
in under 15 months.

“Hi-Tech’s bots are currently in use at Ford’s plant at Gujarat, where they are used for kitting – making up assembly kits from stores. Its robots in the field are working for companies including John Deere and Volvo, as well as various Tier 1 suppliers. Machines at the John Deere and Volvo HGV plants represent something of a game-changer: they include mobile assembly bays,” he adds.

No more assembly lines?
So could this technology lead to the demise of the traditional fixed assembly line? “Normally, assembly is undertaken on conveyor belts – again, vulnerable to single points of failure, and expensive, and ultimate capacity has to be installed immediately,” Kapuria says. “Mobile assembly bays replace the conveyor belt. Each one is autonomous and personnel can come and work alongside them, or the bays can travel to where the personnel are available.”

Hi-Tech offers two types of mobile assembly bay: one is continuously moving, like an assembly line but without the fixed infrastructure, and the other is stop and go. “It enables manufacturers to undertake a lot of different and varied tasks. Conventional assembly lines can only be flexible within their fixed structure,” he adds.

“It is adaptable, because a manufacturer can start with, say, 20 bots and scale up to 30 as needed. You don’t have to create the capacity now for planned production levels five years down the line. It is a disruptive thought: this could mean the end of the monolithic assembly line.”

Not content with threatening to overturn a century of moving assembly lines, Anuj Kapuria reveals that Hi-Tech is looking further into the future. There are another 145 ideas on his initial list: “We are looking at newer technologies for mobile bot guidance. We have global aspirations and we are setting up distribution channels – initially for the USA, but ultimately for Europe as well.”