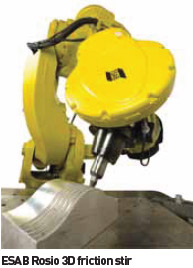 Until now, friction stir welding has only been available for straight joints, but ESAB’s new FSW Rosio five-axis robotic system enables joints to be formed in aluminium alloys around complex three-dimensional profiles. This creates new opportunities in the automotive sector, where there is a need to improve productivity in the fabrication of complex aluminium parts.

Key to the success of the FSW Rosio is the hybrid force/position control system that compensates for any elastic deflections of the robot arm caused by high loads being exerted on the work piece. This sophisticated control is combined with a standard industrial robot and a welding head consisting of a tool adapter, spindle and motor. The rated torque of 40Nm and speed of 3,000rpm are sufficient for friction stir welding AA6000-series aluminium alloys with thicknesses of up to 5mm.

The FSW Rosio has been successfully trialled in joining applications using relatively soft aluminium alloys - AA5000 and AA6000 series - with thicknesses of 3mm or less. Butt and lap welds have been produced in planar and three-dimensional components. For the 3D trials on concave-convex-concave components, the welding programs were generated automatically from the CAD data.