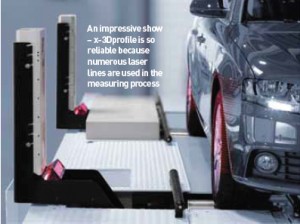 Today’s technology, based on stereo photogrammetry and laser arrays, is rapidly overtaking yesterday’s laser triangulation. The new technology is incorporated in Dürr’s innovative x-3Dprofi le wheel geometry measuring system, which has, since its launch, been integrated into 16 wheel alignment test stands. The breakthrough came at the end of 2007. Dürr Assembly Products had an order to upgrade three test stands and to put the fully-reconditioned machines back in operation on the Audi A4 production line at Ingolstadt within a very limited timeframe. Using the new technology Dürr was able to handle the mix of Audi models, from the A4 Avant, including the range’s saloon model, through to the Audi A5 Coupé and the new Audi Q5 SUV (Sports Utility Vehicle).

“The x-3Dprofi le sensor’s wide measuring range makes it particularly suitable for model mixes that are extreme in terms of differences in width, ride height and tyre size. This is exactly what we require of such systems,” explains Philipp Scheppelmann, responsible for wheel alignment in the assembly planning department at Audi Ingolstadt. The x-3Dprofi le is also in use on a repair line test stand and on a pre-series test stand used by R&D at Audi Ingolstadt. This broad application base for use of the new technology underlines its suitability for volume production. The number of sensors required on each wheel alignment machine has been reduced from 16 to four. This means less complexity and thus less potential for error. Depending on individual applications, an x-3Dprofi le sensor can replace up to seven classic triangulation sensors. www.durr.com