Tetsuo ‘Ted’ Agata, President and CEO of R&D/Manufacturing at Toyota Motor Europe tells AMS about how the carmaker will grow the seeds of new technology in Europe.

He believes that, in order to support Toyota's further global expansion, it goes without saying that the company must enhance its method of "making things". Specifically, he believes that the points of "strengthening internal competitiveness" and "developing efficient overseas production", together with the underlying, "fostering of human resources", will become important future issues to consider. With this very rounded background in both manufacturing and product and production development, Ted Agata is possibly the best candidate for running the carmaker’s European manufacturing activities. I caught up with this ‘renaissance man’ recently and asked him a few questions about his experiences in Europe so far and his plans to grow the company in this most challenging region. 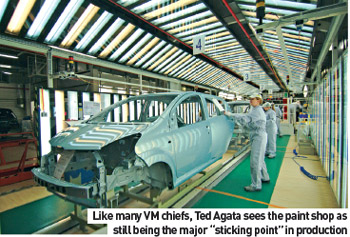 AMS: How are you driving more flexibility into Toyota plants and operations in Western and Eastern Europe? More through automation and improved manufacturing technology or through flexible working times and the Total Production System (TPS)?

Ted Agata: To respond to varying levels of demand from our customers, we are bringing in overtime and ‘time banking’ in the French operation [at Valenciennes]. Of course we are very restricted by the French labour laws on overtime.

We are conducting three shift operations, which is very rare for Toyota, and in the French operation we have linked production to Toyota in Japan. In Japan, where major plants are located very close together we can move people between locations quickly – such as inside Toyota City – as demand dictates. France, of course, is a lot more isolated in this respect.

AMS: Do you feel that you would like to make a Toyota City-type operation in Europe?

TA: Our basic policy is that we want to make cars where the market is. At the moment we have no plans for expansion in France, if our sales volume increases dramatically in Europe, we would definitely look to increase production in Europe rather than exporting from Japan.

AMS: Do you still have a lot of faith in Western Europe? Do you believe that you can stay competitive making cars in the West and not keep moving East?

TA: Again, this depends on the market. Some carmakers go East just to chase the cheap wages. This is not our policy, because even though wages are presently lower in Eastern countries, they are increasing year on year. Toyota is always thinking longterm. 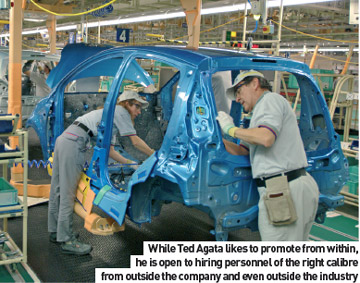 Also, you must remember that with increasing automation the labour cost content of a car remains large, but not so large that it should dictate where you make the car. You need to look at many other costs, like logistics, power, raw material and plant costs. We would rather be chasing the market than chasing the cheap wage.

AMS:When I spoke with Roland Vardanega [see AMS November/December 2006], he said PSA had learnt a lot about manufacturing from Toyota; are there any particular areas where you feel you learnt from PSA in the Kolin joint venture?

TA: We learnt a great deal from their purchasing teams; they took the responsibility for purchasing in the JV and we learnt how they are very, very strict on cost per unit of components and good at driving the price of parts down. One example is where you might have an engineering change – these changes happen on every project. In my experience, in product planning and management, I have found that timing is everything – implement the engineering change immediately to keep the timing right. Then, after that, purchasing can negotiate the new parts required from the suppliers. But at PSA, they would never allow us to implement an engineering change until the negotiation with the supplier had been completed.

AMS: Would this include taking the specification for the new or changed component to the supplier and getting the new price and setting the timing for the change?

TA: Yes, as a result we sometimes struggled on timing. On a cost basis, this policy is very successful; it has been a very interesting lesson for us.

AMS: Have any of these practices found their way into the Toyota system – or will they?

TA: Not immediately or directly, but I think that the philosophy of cost management through a target-based system is one that we would like to implement more.

AMS: Quite a lot of Yaris and Aygo parts are outsourced. Do you have plans for more outsourced manufactured parts such as pressings and modules?

TA: We think we have reached a good balance of outsourcing with a fairly high level of bought-in components. For module-based production we may see more modules in systems, for example, brake systems and fuel handling. The reason is that in module purchasing, a supplier can integrate many components into one module and we can benefit from their expertise and the economy of scale gained from their purchasing.

AMS: Which manufacturing technologies have you seen since being in Europe that have really impressed you?

TA: Laser welding is very interesting but we have not decided on our strategy in this area yet. I have found that here in Europe there are so many engineering and production ‘seeds’ – germs of great ideas. We would like to dig out many of these seeds and combine them with Japanese technology and working practices to grow together.

AMS: Where do you need to make the greatest improvements?

TA: Paint is still the most challenging area, particularly now with the environmental issues. We are embracing water-borne paint technology [but] it is a big challenge to maintain the quality of finish with this technology.

AMS: Are you considering any further joint ventures in Europe with existing or new partners?

TA: Not at the moment, I would have to say no for the foreseeable future.

AMS: Your management teams are now spread quite thin outside of Japan, due to Toyota’s rapid global expansion. Do you have any special training and recruitment initiatives to find people and educate them in the ‘TPS way’?

TA: Our first priority is to train our teams well and to promote from within, the Toyota philosophy takes time that would make it more difficult for managers coming in from other companies.

Sometimes we have so many vacancies that we have to hire someone suitable from another company, sometimes from another European industry.

This is a challenge – for a newcomer to understand the TPS is very difficult. When I look for new managers outside the company, I look for down-to-earth and hard working people with good communication skills; I don’t look too hard at the company or industry that they came from.

Toyota in Europe and beyond

Alliances: Traditionally, Toyota has worked alone, but in order to accelerate its entry into the small car market in Europe, and to reduce the investment required, it decided to launch its Aygo small car in association with PSA which makes the Peugeot 107 and Citroën C1.

Interestingly, it has acquired GM’s shareholding in Subaru and will use Subaru as an additional production source, first in the USA, but later in Japan. It also owns a majority stake in Daihatsu. For the first time in recent history, Toyota executives have been talking openly of acquiring another vehicle company. Which company that might be, and when this might take place, will be interesting questions for automotive industry observers to ponder in 2006.

Production locations in Europe: Three major car plants of its own:

Plus JV plant at Kolin in Czech Republic, which makes the Aygo (as well as PSA models). In addition, plans to make the Camry in Russia are now well under way, with production due to start in 2008.

Reports persist that Toyota is considering another plant in Europe, and that as much as €800m has been approved by the board of Toyota in Japan for this investment. It seems certain that the Russian plant will ultimately make more than the 50,000 annual capacity currently being installed. The general consensus however is that another factory will be built Europe, most likely to make the RAV4 SUV or its next replacement. It is also possible that Daihatsu models could be added to the production line-up in France. Rumours have suggested that Toyota will also build a Lexus plant in Europe, probably in Germany, although this has been denied.

Production locations outside Europe: Japanese plants supply SUVs, sports cars, MPVs and most commercial vehicles come from Japan. Pick-ups currently come from Thailand, but they may also come from South Africa in future.

Globalisation of production: As well as growing strongly in Europe, Toyota is very well established in North America where it is eroding the shares held by the American Big 3 (Ford, GM, DaimlerChrysler). Toyota was one of the initiators of global production. Indeed, when the company’s Australian plant was making the Corolla, this model was actually the only car ever made simultaneously on all the world’s continents.

New models: Yaris has been replaced in 2006 with an all-new model as shown at the 2005 Frankfurt Motor Show; it is also believed that a mini-SUV, based on the new Yaris will be added to the production line-up at Valenciennes, with Corolla and Avensis due for facelifts or significant upgrades during the period under review here.t The Corolla undergoes a complete change in 2007; indeed the hatchback models made in the UK will be re-named – the all-new model will be called Auris. The Corolla name will be retained for the sedan and MPV versions made in Turkey.

Important recent events: The replacement of the Corolla by a new model was confirmed in 2006, and replacement of the Corolla with the Auris name. Also, Toyota has confirmed it has finally moved into the black in the UK after 17 years’ operation here. The fact that Toyota has been prepared to wait this length of time before making a profi t in the UK confirms the company’s long term view.

Toyota has achieved its first aim of making at least 800,000 units annually in Europe; it is on the way to its next target of one million units in the long term. The 800,000 upa level has been achieved within the period under review, without the Russian plant.