With a heritage covering almost a century, Bentley Motors is among the world’s most iconic brands. Since its parent became Volkswagen, the company has experienced a renaissance with the launch of several cars that are true objects of desire. The heady mix of speed and luxury combine in the Continental and Arnage ranges to suit the most discerning drivers. From Bentley’s Crewe, UK plant, the company produces limited numbers of hand-finished cars that incorporate the famous leather-and-wood craftsmanship that typify the brand.

Bentley Motors has a strong PLM (Product Lifecycle Management) strategy, evolved to match the company’s 21st century needs. Derek Harrison, Senior Manager in IS – Product Development Systems, describes the process. “Bentley’s PLM deployment is based on Dassault Systèmes V5 technology, incorporating DELMIA for assembly and planning management. Design data is managed within ENOVIA, enabling enterprise-wide data access. Currently we have 407 CATIA and 30 DELMIA users at Bentley and we are expanding the use of 3D across our business.”

Planned acceleration
“The ability to create, use, and share 3D design data in nondesign situations allows us to work both collaboratively and concurrently. Because DELMIA sits between our design and ERP technologies, it provides the ‘how’ to their ‘what and ‘when’.” 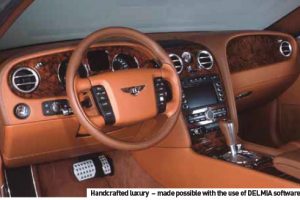 John Unsworth, the company’s CAD strategy manager comments, “Using DELMIA we can see designs in a manufacturing context and visualise how components can be assembled. Virtual data can be analysed in fine detail to define the most efficient production process methodology. Since this information is available during the design evolution process – even before designs are completed – departments that previously worked in series (having to wait for others to complete their work) can now work in parallel. “Benefits are deriven from designers and manufacturing engineers sharing the same visual data and having the visibility of each other’s work as is progresses. Through this technique, design for manufacture has improved considerably because designs are optimised for manufacture very early in the design process, even at the conceptual stage. One example of this was in the conceptual design for an instrument panel, which was modified before mainstream design engineering was initiated. The Bentley process and systems architecture allows manufacturing engineers to access and comment on the proposed design, from an assembly perspective, very early in its lifecycle,” he continues.

Harrison adds, “Line side planning procedures have been greatly enhanced through DELMIA’s production simulation features. Because these allow us to link with the engineering bill of materials and assembly specifics to the virtual build, it is possible to tune the process sequence for maximum efficiency. Using skeleton data and applying it to future assembly plans at Crewe, we are able to plan from existing knowledge and add more detail as it was generated.”

Bringing in further production technology
Having made an investment in DELMIA as part of its DS-based PLM infrastructure, Bentley Motors is able to bring further advanced production technology into other parts of its business at low cost. The niche carmaker is considering options for enhancing its design in context utilisation.

This could include rolling out 3D DELMIA manufacturing data to the supply chain to improve manufacturability of designs, the after sales network and providing imagery for marketing purposes. The company also uses DELMIA to enhance its virtual build, improve processes and develop staff training. Harrison explains, “The earlier we can show assembly procedures to lineside engineers, the better they will be able to understand and learn them. Using DELMIA, we are able to develop, refine and demonstrate build sequences virtually, allowing assembly engineers to visualise their work long before the parts are actually available.

“Bentleys are sophisticated, complex cars that represent a highpoint in automotive engineering. The frontal zone packaging, for example, is particularly refined and requires a great deal of planning and training to manufacture. By showing animated assembly sequences of real design geometry, staff training is greatly enhanced. This means that those involved are prepared and fully up to speed by the time assembly commences. Any difficulties can be resolved well in advance so that work proceeds faster and more smoothly because assembly methodology has been made available in context through DELMIA V5,” Harrison tells AMS.

Harrison summarises the benefits of the Bentley DELMIA deployment. “The Dassault Systèmes technology that we have used delivers the capability for concurrent, collaborative engineering. This facility provides previously separated design, engineering, and planning facilities with the means of working together using the common language of 3D.

“Designers are able to take much more account of manufacturability while manufacturing engineers, having early access to design data, can influence designs and commence training to make their work more efficient. This allows manufacturing engineers to develop more robust, proven assembly procedures to enhance the process further. The result is increased efficiency, assembly time reduction, and better communications within and beyond the enterprise.” 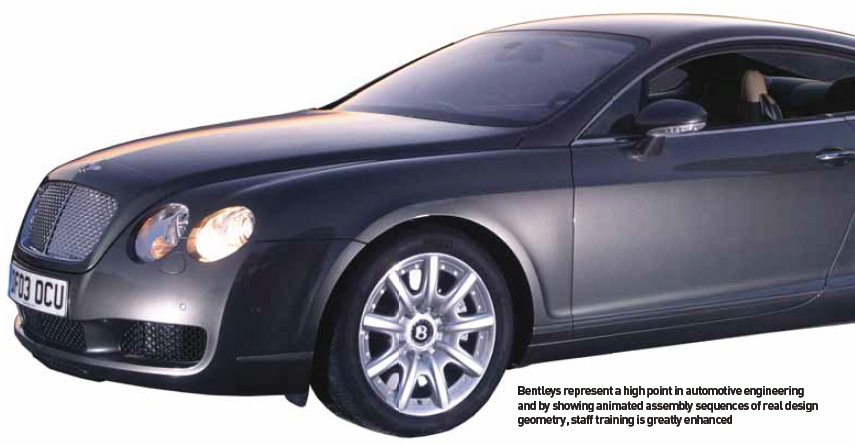